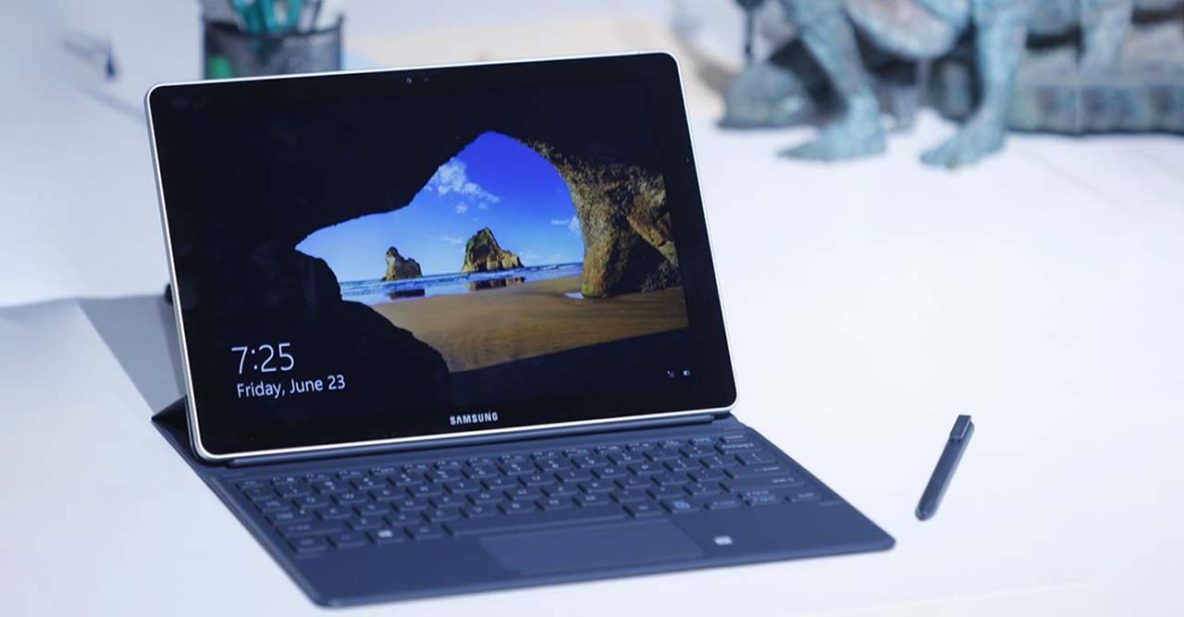 SAMSUNG is aiming to give Apple’s iPad Pro a serious run for its money; hence, the release of the new Samsung Galaxy Book in the Philippines. It is priced at P44,990 (around $890) locally, which isn’t cheap, but neither is the hardware it is going up against. The 10.5-inch iPad Pro with 64GB of storage, and sans the accessories, sells from P36,990 ($732) in authorized stores.

The Galaxy Book ships with a keyboard dock and an active digitizer stylus for low-lag drawing and handwriting with the two-in-one. Samsung says it caters to individuals who are looking for productivity and creativity in the workplace. The company is likewise keen to point out that it runs full Windows 10, not Android or Chome OS, which makes it better suited for general computing work. 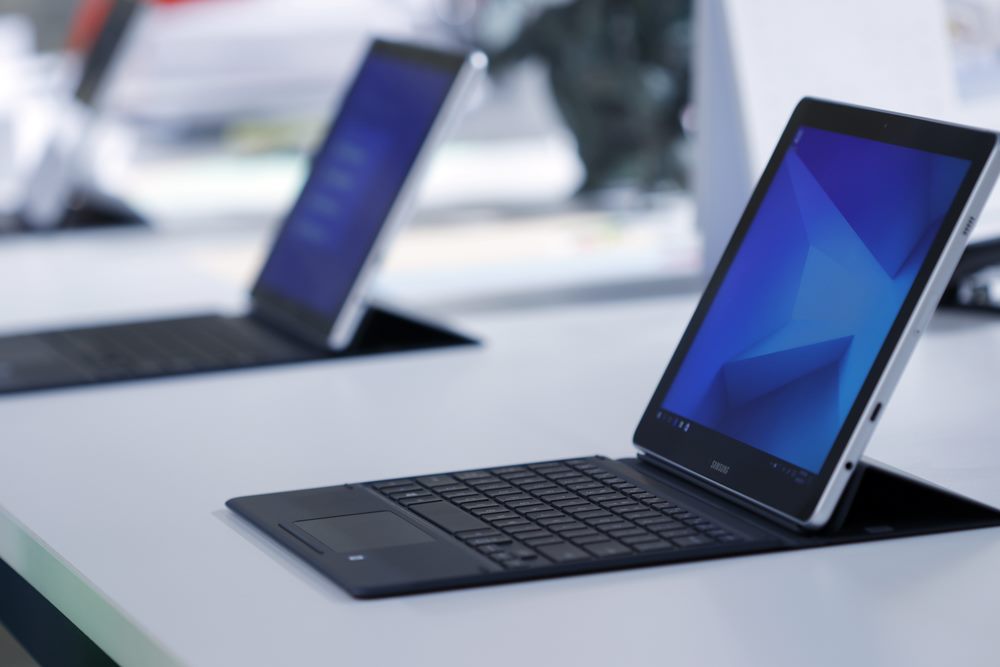 The Samsung Galaxy Book is targeted at individuals who are looking for productivity and creativity in the workplace.

It’s obvious the “laptop replacement” schtick is in play here. But does it make sense this time around? Apple couldn’t quite pull it off with the iPad Pro. So if the Samsung Galaxy Book is essentially a tablet with power tools, just like the iDevice, why should consumers view it differently? One word: Windows.

We probably don’t need to say this, but Microsoft’s operating system is better at multitasking, has more excellent programs than we care to count, and is familiar to more users. Sure, some feel the next version of iOS could close the gap, but the additional computing requirements means there will be compromises. And while we know the platform isn’t perfect, Windows 10 has been optimized for both tablet and laptop use. 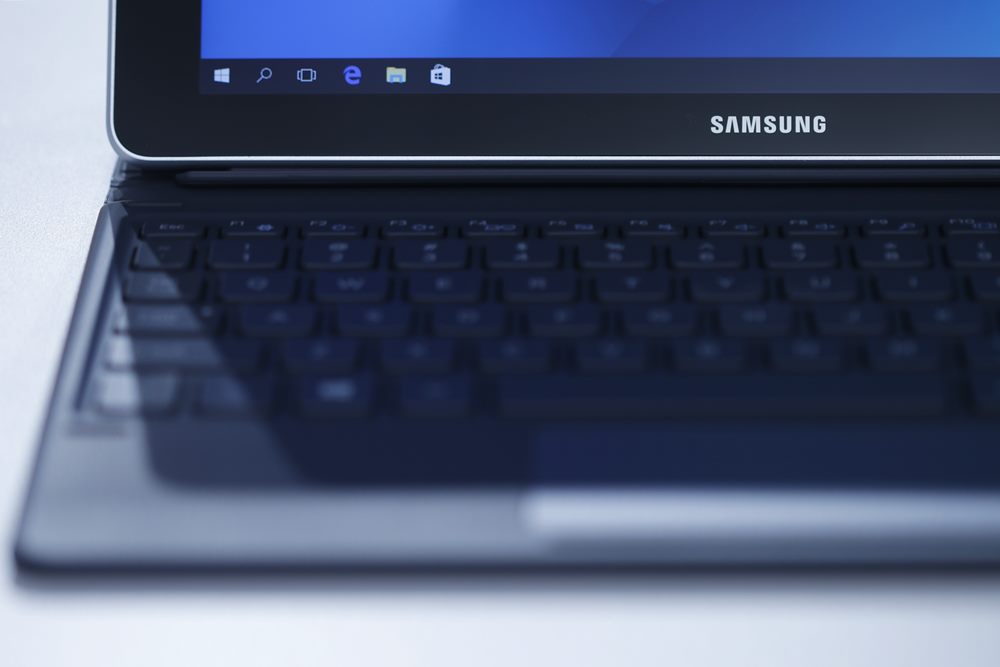 The Galaxy Book runs full Windows 10, which is better at multitasking.

On the software side of things, the Book also supports Samsung Flow, a nifty feature that allows you to unlock the device using a Samsung phone with a fingerprint reader. It also beams notifications to the machine from your mobile, so you can leave it unattended on a table or inside your bag.

Samsung Notes, on the other hand, makes it easier to scribble or jot down notes using the included stylus. The Book has the ability to annotate PDF files, as well as mark up photos and graphics before being presented on a screen or uploaded to social media.

READ ALSO: Is this the cheapest Windows 10 laptop in PH?

We found the stylus to be responsive and sensitive to pressure. In other words, it should prove useful for the people who will be using it. It’s almost the size of a real pen, too. Our only gripe is that perhaps Samsung should have found a way to insert the pen into the body of the Book given its thickness. 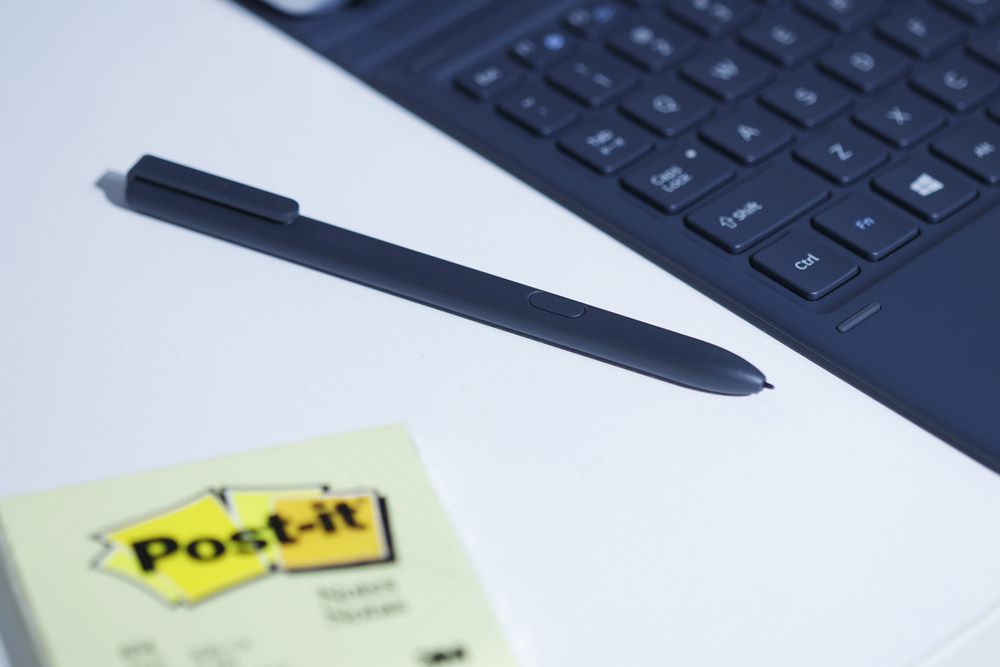 The stylus that ships with the Samsung Galaxy Book is responsive and sensitive to pressure.

As for the hardware, the Samsung Galaxy Book is about as well-built as they come, though it’s not strikingly designed like the iPad Pro and other two-in-ones. The bezels are thick, the screen is reflective, and the slate itself is chunky. And despite the curved frame and non-glossy finish of the back, we found it a bit unwieldy, which is not what you want to hear when people describe a portable device. At 644 grams, it’s also rather heavy for a tablet. For comparison, the 10.5-inch iPad Pro weighs in at 477 grams. 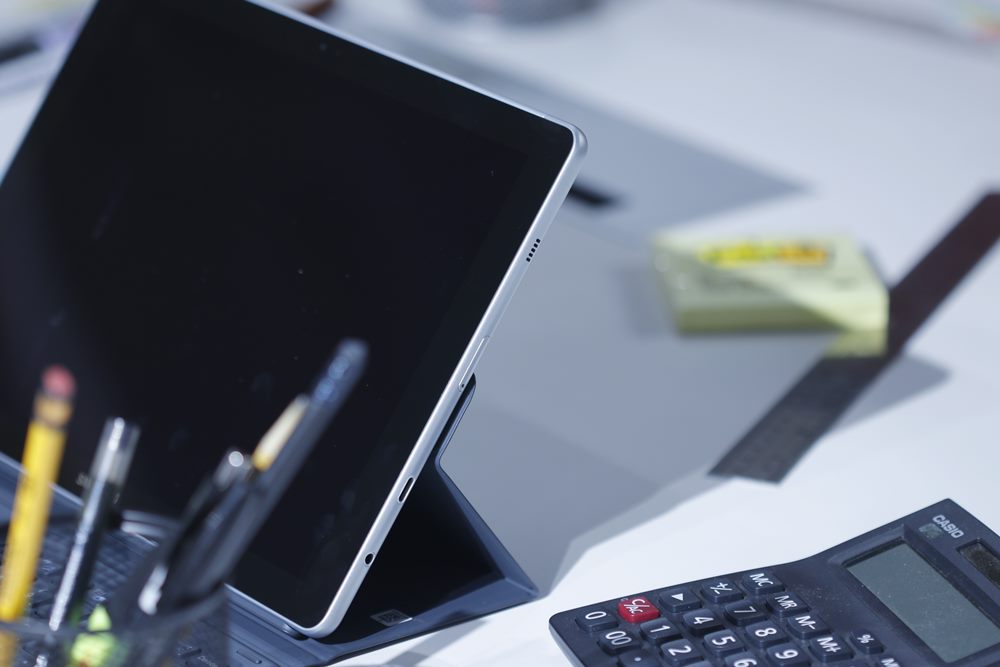 The Galaxy Book is about as well-built as they come.

The right-hand side features a USB Type-C port for fast charging and file transfer, plus it houses a hybrid tray that can take in a microSD card along with a SIM card for connecting to the internet when Wi-Fi isn’t available. A magnetic connector along the bottom of the device provides a quick and convenient way to attach the tablet to the keyboard dock. 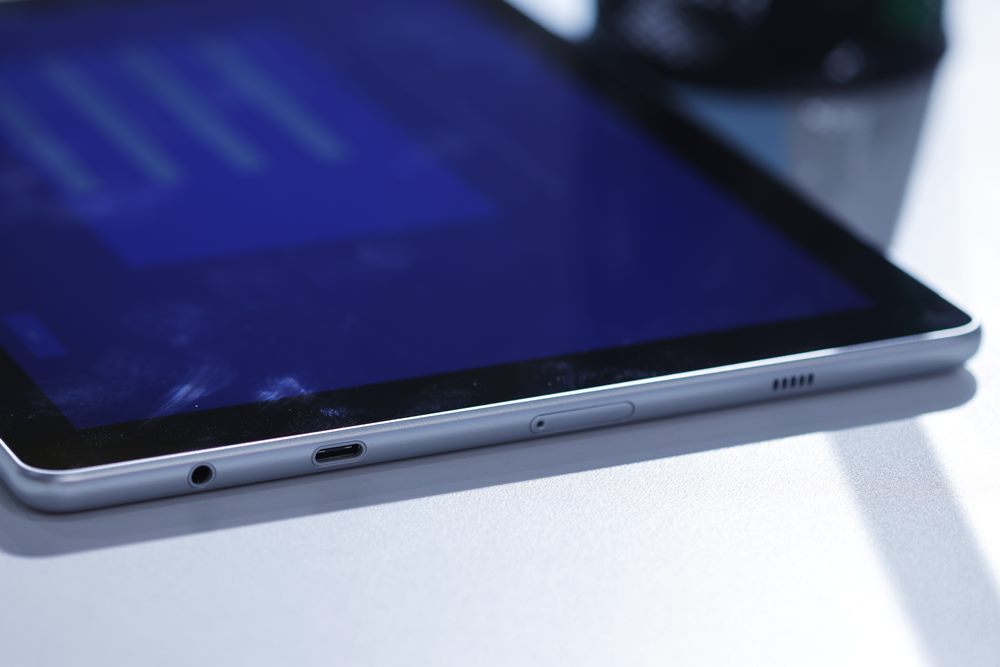 On the Samsung Galaxy Book’s right-hand side is a USB Type-C port and a hybrid tray. 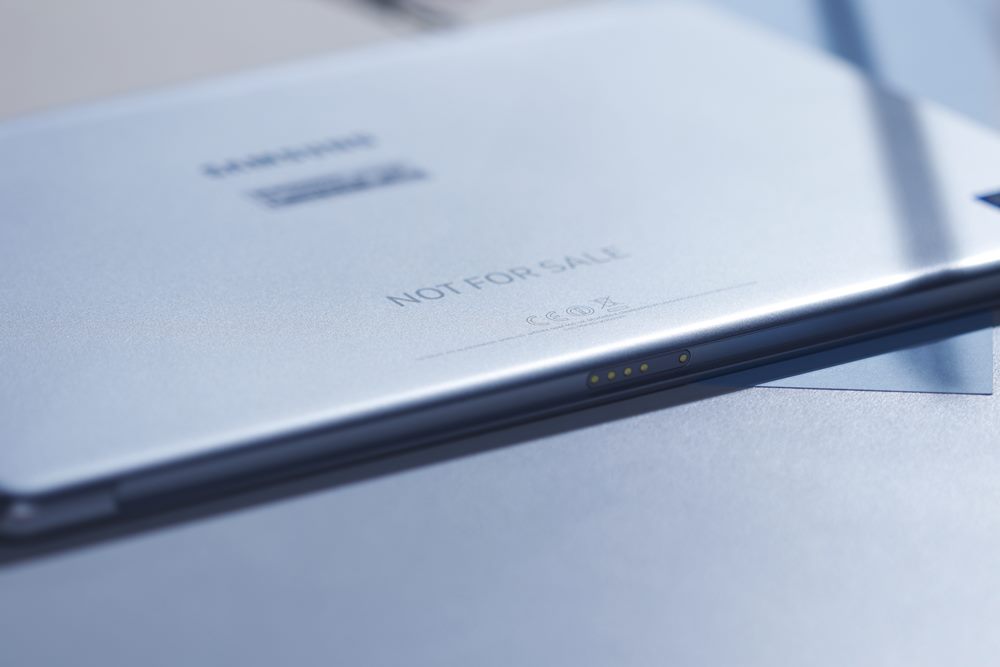 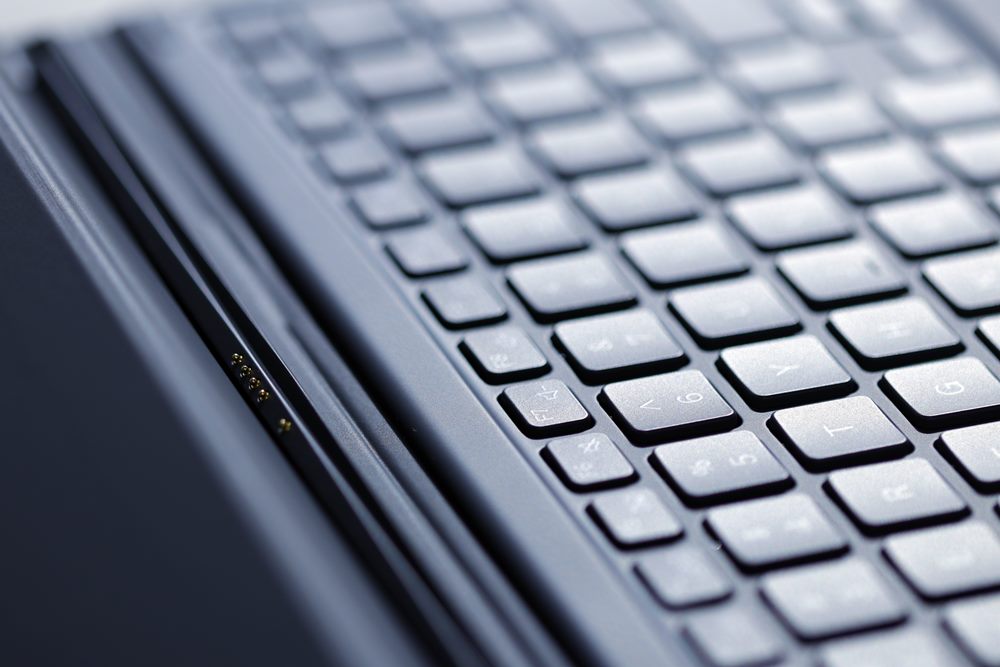 …to the keyboard dock.

Speaking of the keyboard, it provides a great typing experience — as good as it gets for its size. It isn’t as comfortable to type on as that of a regular laptop, but the chiclet keys provide a good amount of depth and aren’t too cramped. The one-piece touchpad is wide, but is shorter from top to bottom than we’d like it to be. 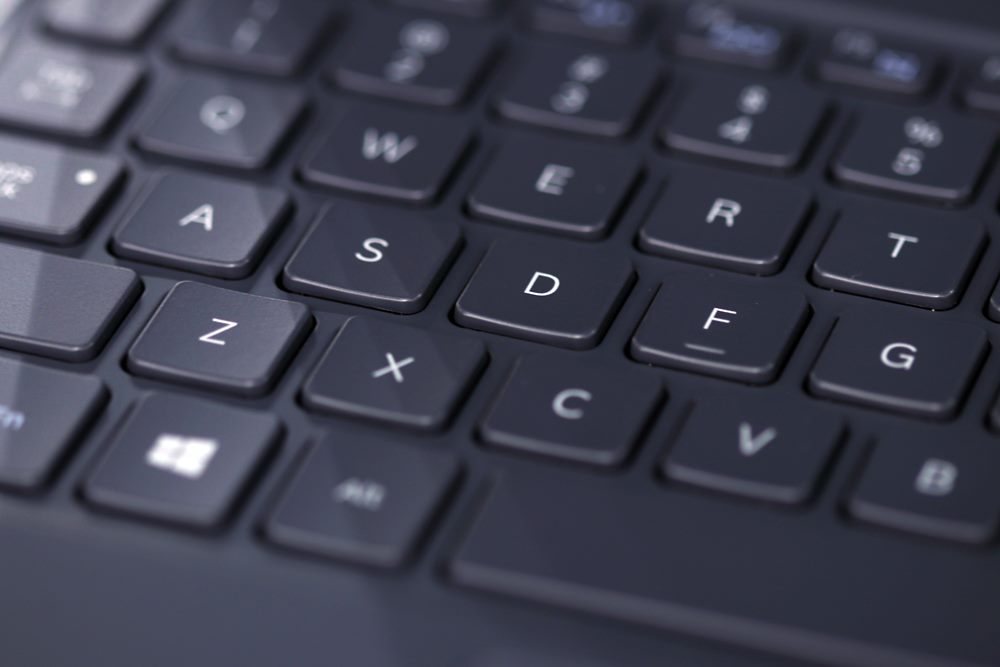 The chiclet keys provide a good amount of depth and aren’t too cramped.

The 10.6-inch LCD touch display is colorful and offers decent viewing angles, at least when viewed head-on, with a 1,920 x 1,280 resolution on a 3:2 aspect ratio that should let you utilize the screen real estate more efficiently in both landscape and portrait modes. For viewing content, or creating it, the screen will suffice; most users of this device will be sticking to general tasks anyway.

Performance is actually peppy. The 7th-generation Intel Core m3 processor coupled with 4GB of RAM is quiet, keeps things chugging along nicely, and doesn’t draw a lot of power. It likewise doesn’t produce enough heat to warrant a built-in fan. Expect graphics-intensive games to cause hiccups, though, which is less likely to be an issue with many full-blown laptops in this price range. 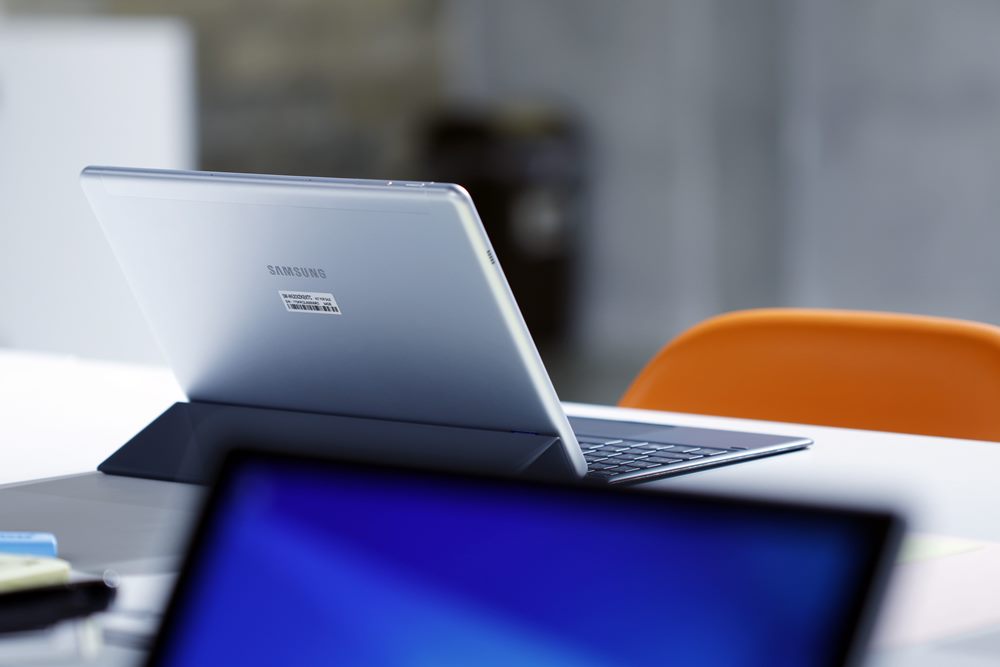 Can the Samsung Galaxy Book be a laptop replacement?

Overall, the Samsung Galaxy Book has the goods to challenge the iPad Pro as a laptop replacement. However, keep in mind that it doesn’t come cheap and its size and weight hold it back from being the ideal tablet.