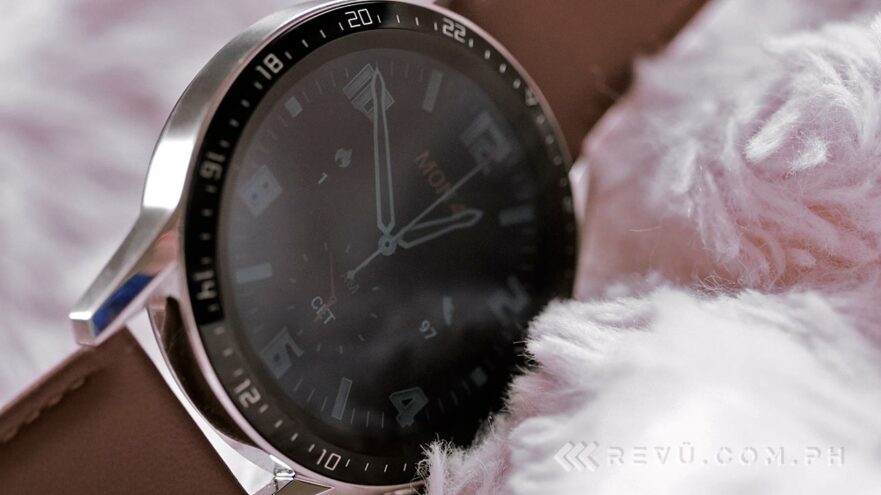 The Huawei Watch GT 2 smartwatch is now official in the Philippines, with the 46mm and 42mm variants coming in two bezel designs.

The 46mm Watch GT 2 with the dial etched into an all-black frame and a rubber strap is priced at P10,990 (around $218), while the version sporting a silver stainless-steel case and a leather strap retails at P13,990 ($277), because, um, leather. And the latter comes bundled with the same band included in the retail package of the cheaper Watch GT 2, so you’re getting two in total.

We’ve spent two weeks with the 46mm Huawei Watch GT 2, and here are our thoughts on Huawei‘s newest and improved smartwatch.

We’re sure you’re wondering: What does the Watch GT 2 do that the original Watch GT doesn’t? There are a couple of new features actually, particularly for the 46mm variant. The Watch GT 2 has a speaker that belts out enough volume to be heard outdoors; it boasts always-on screen function; it can take calls when connected to your phone; it has remote music control and onboard storage for your music; and it comes with stress-monitoring tech.

And although the AMOLED display is the same size and resolution as the one on the first version, the 3.5D glass covering the panel is now on the same level as the bezel, which makes side swipes feel satisfying. The touchscreen is crisp, vibrant, bright enough for outdoor use, and there isn’t much of a bezel surrounding it. The screen is every bit as good as the one on the original, if not slightly better.

On a related note, there are several new watch faces you can use from the get-go, and some of the them look better than the ones preloaded on the first-gen model, at least to us. As always, additional watch faces are available for download (there are more than 20) via the Huawei Health app, which you can pull from the Google Play and iOS app stores.

The Watch GT 2 is powered by Huawei’s new Kirin A1 chipset, which supports Bluetooth 5.1 and promises lower latency and power consumption.

The always-on lock screen can be toggled on in the settings, and there’s a choice of analog and digital faces with three color options each. Both styles look great, especially on a screen of this type and resolution. They pair well with casual or office wear. However, keeping the display on all the time will drain the battery much faster than any other functionality, although it won’t stay on when the watch is not on your wrist.

Based on our experience, enabling the always-on lock screen while still making use of a lot of the watch’s functions drops the battery by about 15% per day. That’s more than acceptable considering many smartwatches, including the Apple Watch Series 5, will only last two days at most, with or without a screen that can always tell the time.

Besides the always-on screen, the other new feature many will find very useful is remote music control, which allows the Huawei Watch GT 2 to pause and skip through songs playing on a tethered phone. It works seamlessly with Spotify and Apple Music with a tap on the screen. The long-range Bluetooth connectivity of the watch even allowed us to control the music even while our phone was charging in the next room.

The hardware is mostly unchanged. It’s attractive, and it feels solid, with the styling, dimensions, and weight of a regular wristwatch. It doesn’t look like a toy watch, or something that a child might wear.

On the software front, the Huawei Watch GT 2 boots the company’s own Lite OS, the same operating system on the first-gen model. The swipe-based interface is identical to that of the Watch GT, but with a few additional screens and menus. It still doesn’t have apps on it — or games to keep you occupied during lengthy commutes. Its core functionalities are limited to activity tracking and health monitoring.

That’s not bad, especially since both are handled brilliantly by the Watch GT 2. However, if you’re in the market for an all-out smartwatch that can do so much more, you might want to look elsewhere.

The watch does feature staples such as a GPS receiver, a timer, a stopwatch, a compass, and a barometer to measure air pressure, and waterproofing is back, just like we got on the original Watch GT. It can also monitor 15 different workouts — from walks, runs, and cycles to swims and exercise machines.

The Watch GT 2 will still automatically keep tabs on your daily steps, heart rate, as well as stress levels, if you allow it through the Health app. And you can share data from the watch with third-party apps you might already be using, such as Google Fit or MyFitnessPal. Sleep tracking works great, too, but you need to register at least three hours of bedtime to get a reading.

If there’s one thing that sets the Watch GT series apart from most other smartwatches on the market, it’s battery life. Huawei advertises two weeks between charges for the 46mm Watch GT 2 and one week for the 42mm variant.

If there’s one thing that sets the Watch GT series apart from most other smartwatches on the market, it’s battery life. Huawei advertises two weeks between charges for the 46mm Watch GT 2 and one week for the 42mm variant. We found that claim to be fairly accurate

We found that claim to be fairly accurate, as long as you leave some advanced, power-hungry features like always-on lock screen off and limit GPS tracking. With light use, we can see the battery life stretching to three or even four weeks.

The Huawei Watch GT 2 is recharged via a circular charging base that snaps onto the back of the watch using a strong magnet and connects to a USB-C cable. Charging is not wireless, so it’s pretty fast — just an hour plugged should replenish the battery to almost full.

Should you get it?

The Watch GT 2 still boasts the exceptional battery life and excellent health and fitness tracking of the original Huawei watch, while bringing new and useful features to the mix, such as a loudspeaker, an AMOLED display that can stay on all day, and music control from your wrist.

And whether you go for the 46mm or 42mm version, the Huawei Watch GT 2 looks and feels like a high-end wristwatch.

Those who want a fitness-focused smartwatch with weeks-long battery life and don’t want to settle for an activity tracker like the Huawei Band 4 or Band 4e need look no further than this one.