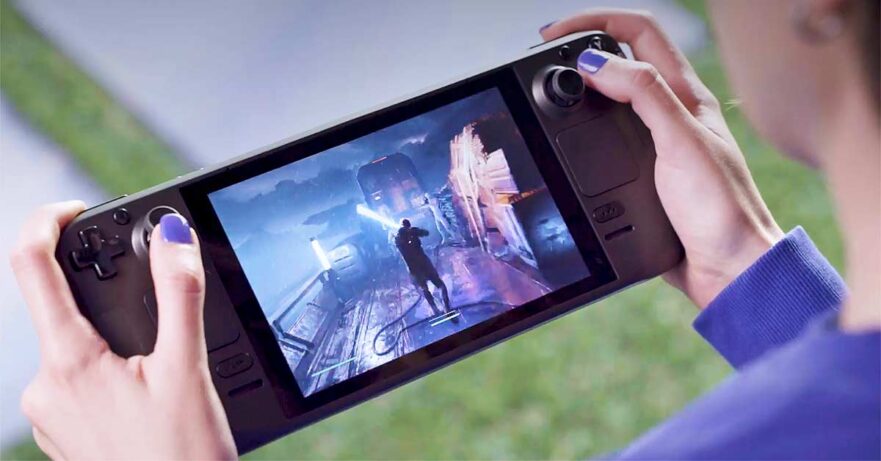 Valve is after Nintendo‘s cash cow. Valve today announced a new handheld gaming system that will no doubt put pressure on the Switch, which recently got an OLED upgrade.

The Steam Deck is essentially a compact PC that runs a custom version of SteamOS to give a console-like experience and can play your entire Steam library. It’s built on Proton, a version of Linux that runs both Windows and Linux games and applications, so there’s a good chance it might be able to run the Game Pass app for PC without any issues.

Valve’s Steam Deck features dual analog sticks on either side of the 7-inch, 1,280 x 600 LCD touchscreen, plus a D-pad on the left and face buttons on the right. It also boasts two capacitive trackpads, allowing you to play games designed to be played with a mouse, and a six-axis gyroscope for motion controls.

Just below the touch-sensitive pads, you’ll find the dedicated Steam and Menu buttons, as well as dual speakers for stereo sound. Up top, you get four trigger buttons, while on the back, there are four customizable buttons on the grip — two on each side.

The Steam Deck will arrive in three different models, all of which have the same custom AMD APU inside with 16GB DDR5 RAM and up to 512GB of NVMe SSD storage for the top-of-the-line version. There shouldn’t be a power difference between the variants, but paying extra for additional and faster storage could be worth the money, since most modern games these days eat up a lot of storage.

The internal storage can’t be upgraded, but there’s an SD card slot to expand your storage space. And you can play games through the SD slot if you don’t mind them loading a bit slower than off the internal SSD.

So, how much does the Steam Deck cost?

Learn more at https://t.co/ZOTx3KUCVK and reserve yours tomorrow. #SteamDeck pic.twitter.com/jcgbaKfT9c

You have plans of buying one?

Hopefully, retailers in the Philippines will offer the Steam Deck to their customers, but there’s no official word on that yet.