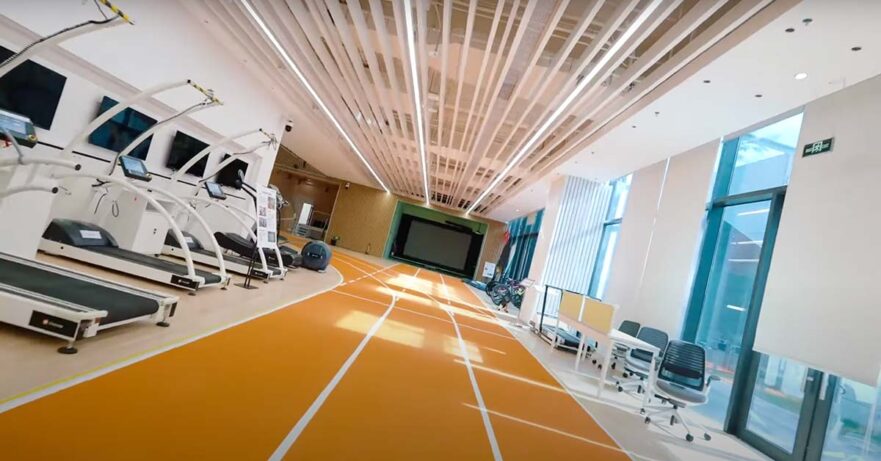 The Huawei Consumer Business Group’s new, first-class facility in Songshan Lake, Dongguan, China, is indeed massive at 4,680 square meters. It is, after all, tasked to “support more than 80 types of testing requests for R&D personnel in fields such as professional research, ecosystem co-development, and health and fitness scenario incubation.” Eventually, it’s there to assist in the research, incubation, and testing of Huawei‘s smart wearable devices.

The virtual tour Huawei conducted for us Southeast Asian journalists couldn’t have come at a more apt time, as the company just announced the Huawei Watch GT 3 series in the Asia Pacific region. In fact, here in the Philippines, the most recent GT 3 models are up for preorder until December 9, with the base model priced at P11,999 (roughly $238 converted) going for just P8,999 ($179). Our full review of the smartwatch should be up soon.

What’s inside the new facility

From mountains to waters, there’s a lot the company’s R&D team can explore. There’s a research area for rock climbing and a testing area for swimming. You can find a plateau-simulation laboratory valued at ¥3 million (almost P24 million or nearly $500,000) that Huawei said replicates high-altitude environments up to 6,000 meters above sea level to test how oxygen saturation affects the human body. There are also facilities that can “measure the changes in the human body under different altitudes and climate conditions and obtain accurate high-altitude data for analysis.”

Expect to see a surround-type optical-motion capture system with a 360-degree motion capture. The setup is composed of 28 high-speed infrared cameras that have a peak sampling rate of 10,000Hz. That means the system can record many subjects, including moving bullets, with millimeter-level accuracy.

Researchers conduct field simulation and testing on different scenarios in the Huawei Health Lab to make sure that the motion data they capture is accurate. And for the enrichment of anyone’s sports experience, a table-tennis research area and a group-exercise testing section have been added, too.

With the facility’s exercise-physiology research area, which is equipped with cardiopulmonary function and metabolism meters, heart-rate belts, and high-performance treadmills, the tech company’s R&D team can monitor VO2 max, calorie consumption, and workout heart rate. It’s because of these labs that Huawei’s wearable products now support more than 100 workout modes.

You, too, can get an idea of what the Shongshan Lake Huawei Health Lab looks like. Just watch the video below.

Huawei now has more than 60 research-institution partners and over 5 million research-program participants. It’s definitely one of the leading sports and health-service providers worldwide, what with its more than 320 million global cumulative service users and over 83 million Huawei Health App average monthly active users.

And with its new ¥200-million (roughly P1.5 billion or approximately $31 million) R&D investment project, Huawei is truly establishing its professional competence in health and fitness, so it can fulfill its vision of bringing digital health to every family.