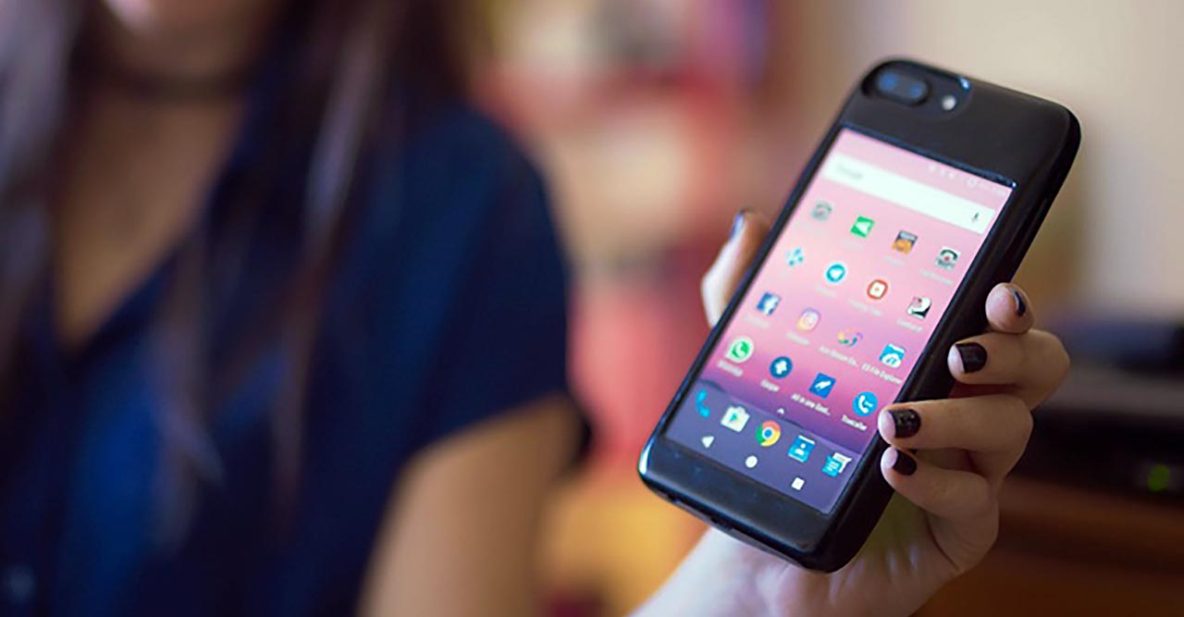 WE don’t imagine plenty of people losing sleep over the thought of an Apple iPhone running Android — we certainly haven’t lost a wink over it. But if you’ve ever wondered how it would look, or what it would take to make it happen, then read on.

Or better yet, take a good look at the Eye, an iPhone case that snaps onto the back of your iPhone, adding a second, 5-inch screen — of the AMOLED variety, mind you — and all the internal hardware needed to power it, and then some.

The Eye is an iPhone case that snaps onto the back of your iPhone, adding a second, 5-inch screen and all the internal hardware needed to power it.

Think two SIM card slots; a MediaTek Helio P20 processor replete with 3GB of RAM and up to 256GB of storage; a 2,800mAh battery with wireless-charging support; an NFC radio; an infrared blaster for controlling appliances; and a headphone jack. Yep, the Eye waded into waters that Apple would not go near — or into again, ever.

SEE ALSO: Get protected: Trident cases for your Apple iPhone 7 Plus

However, the attachment won’t be entirely independent of your handset, as it shares the Apple iPhone’s microphone, loudspeaker, and cameras. It will even allow you to take a selfie using the iPhone’s capable rear-facing camera.

Black or white, the case will come in two versions: one with cellular connectivity and the other without it. It is currently looking for backers on Kickstarter — but unlike other crowdfunding ideas, it has already smashed its funding goal of $95,000 or around P4.8 million (and is soaring its way to $180,000 or roughly P9 million).

So, yeah. Apparently, a good number of people think that strapping what is practically a fully functional Android phone to the back of an iPhone, even if said device will make the iPhone a handful to carry around and keep in a pocket, is an idea worth backing.

Many people think that strapping what is practically a fully functional Android phone to the back of an iPhone is an idea worth backing. The Eye has already smashed its funding goal of $95,000 or around P4.8 million.

If none of its potential downsides dissuade you, you can back the Eye on Kickstarter, where it starts at $95 (approximately P5,000). Retail price is estimated to be $189 (P9,500) once it becomes widely available. It supports various iPhone models from the Apple iPhone 7 Plus down to the iPhone 6.

Story via The Verge