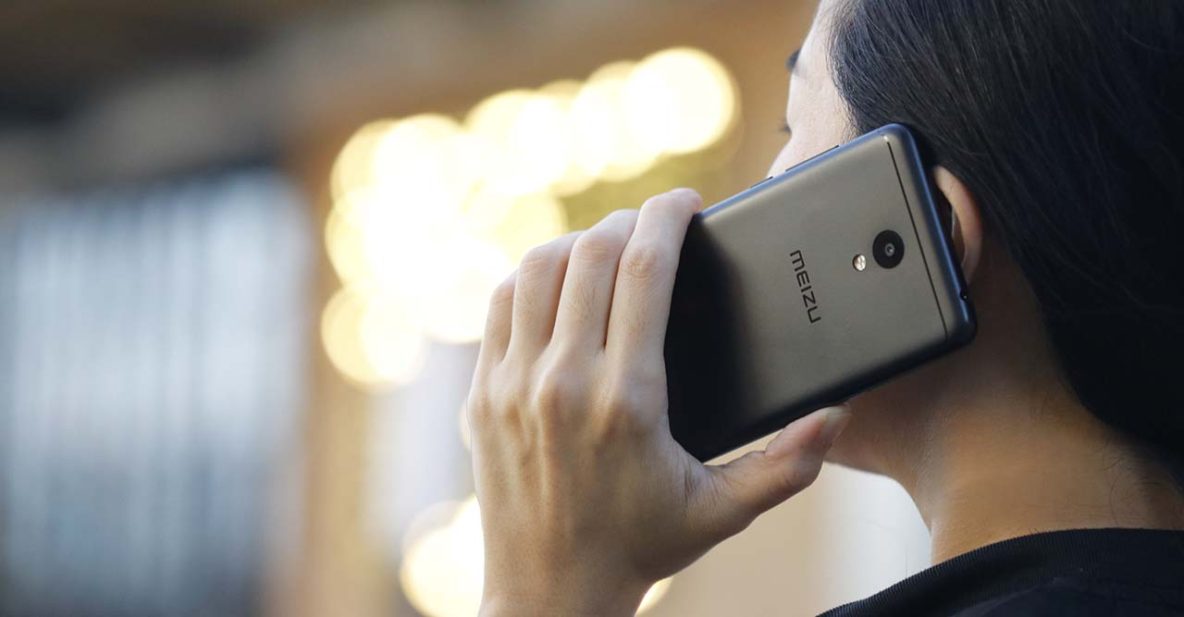 MEIZU, per usual, is refreshing its M series smartphones this year. The M6 Note debuted last month, and the OEM has reported sales of over 200,000 units in its native China, as multiple news outlets have reported.

But while the M6 Note has been given particular attention, the M6, successor to the M5 and Meizu’s next entry in the bargain basement, has been largely M.I.A. Well, not anymore. Meet the Meizu M6 — all in black in this case — which will still be unveiled on September 20.

From a distance, however, it may seem like not a lot has changed since last year — and you’d be right. Either way, we’re not complaining. The M6 is completely usable with one hand. 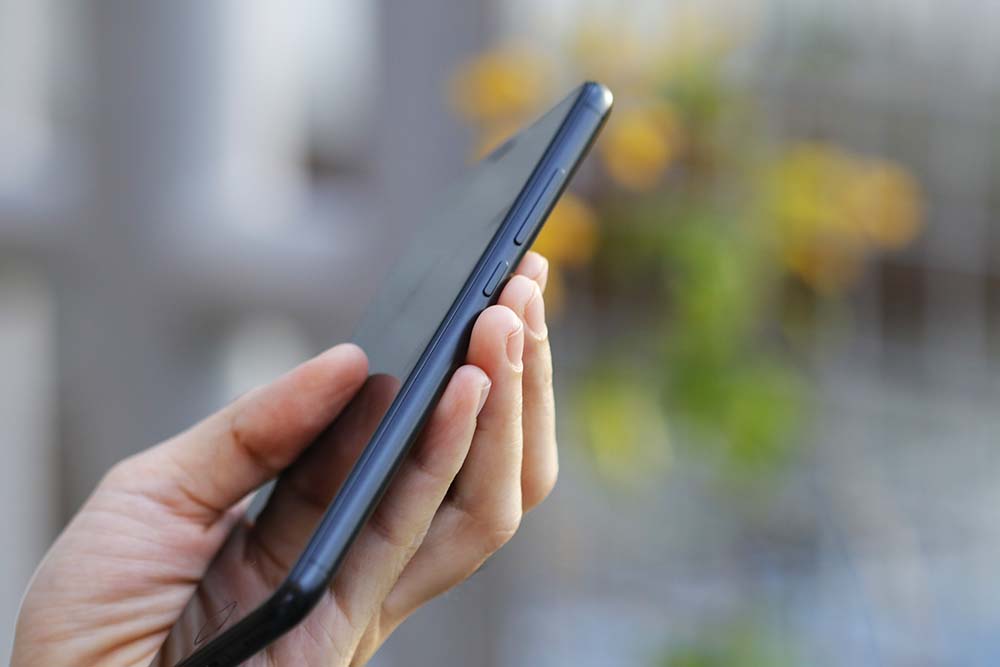 The Meizu M6 is completely usable with one hand.

It’s about the same size as last year’s model, same 5.2-inch screen size. Same feel in the hand as the plastic unibody rests snugly into the palm of one’s hand. Same curvy form factor, only with two faint — and apparently fake — antenna lines that had skewed along the edges for aesthetic effect. 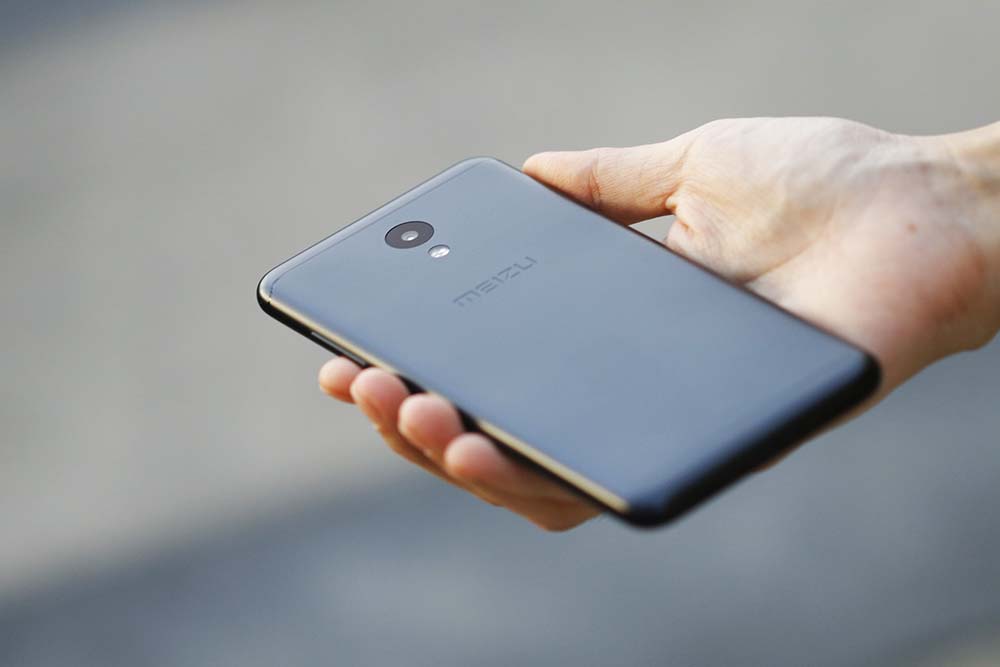 The Meizu M6 doesn’t creak or give in as pressure is applied to the back.

The fit and finish is top-notch, from one end to the other, and the finished product doesn’t creak or give in as pressure is applied to the back. Understandably, it’s not as solid as Meizu’s higher-end offerings, but for its intended audience, it’s likely that the quality craftsmanship will resonate.

READ ALSO: Meizu Pro 7 review: Excellent from front to back

Located along the bottom edge are the microUSB connector and the single speaker (the other cutout, we’re guessing, houses the mic hole). The loudspeaker isn’t suited to playing music in a bedroom or dorm room, but it’s fine for making or receiving calls.There’s a headphone jack up top, that’s it.

An LCD screen with a “fair for the price” 720p resolution fronts the Meizu M6. Picture quality looks great, with natural colors and pleasing contrast and unusually high brightness for a budget blower. What’s even better is that the panel’s color temperature can be tweaked a bit, allowing for warmer or cooler tones. There’s also a blue-light filter mode that adds a yellow tint to the screen to minimize eye strain. 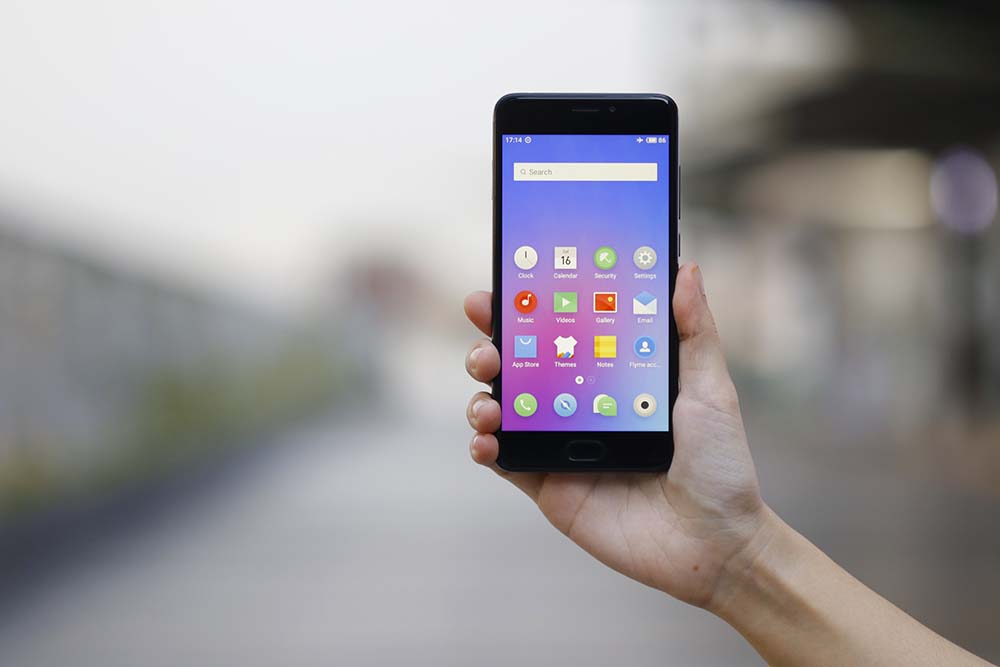 Thumbs up: The Meizu M6 panel’s color temperature can be tweaked a bit, allowing for warmer or cooler tones.

The bezels on the sides are sufficiently thin; the ones above and below display, meanwhile, look acceptable for a phone in any price range. A familiar mechanical home button lives on the bottom bezel. There are no keys — capacitive or otherwise — flanking it.

Which means the M6 continues Meizu’s trend of sticking to one button for navigation. Pressing it once brings you to the home screen, while tapping it will take you back one screen. Additionally, swiping up from the left or right of the bottom of the display allows you to switch between apps without having to return to the home screen.

Speaking of the home button, it has a fingerprint reader embedded into it, which other than unlocking the unit can also be used for securing apps and their data. Y’know, if you don’t want anyone snooping on your messages and online activity. Another thing: The sensor isn’t active while the screen is off, so you’d have to press the home button to unlock the phone. 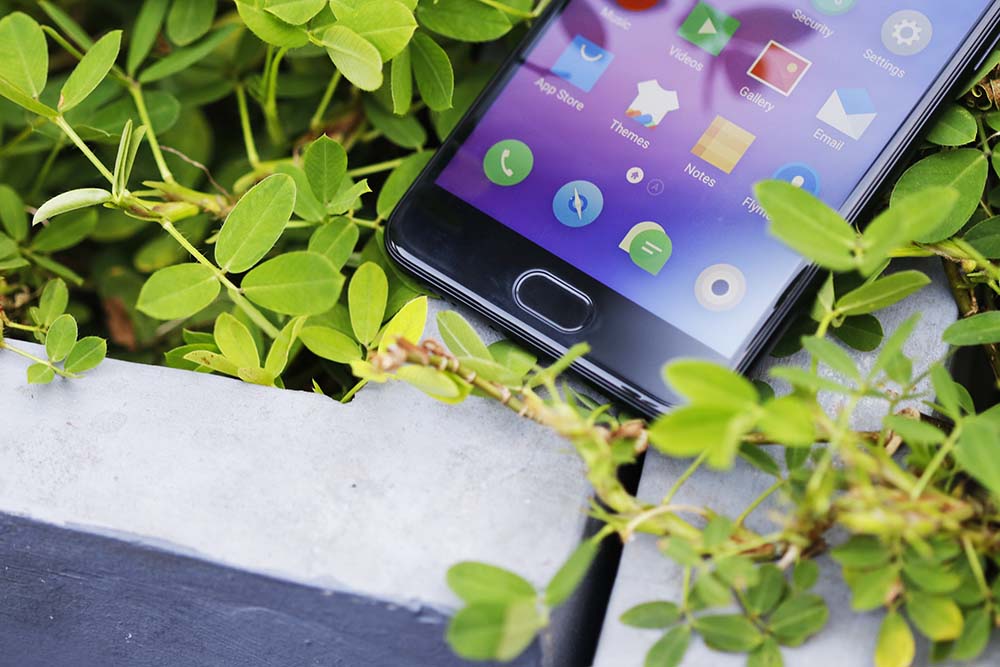 As with other Meizu phones, the M6 sticks to one button for navigation. That home button has a fingerprint reader embedded into it.

Meizu has made it abundantly clear that the M6 isn’t meant for people who are looking to upgrade from the M5 or lesser handsets — the more competent M6 Note exists for this purpose. The Meizu M6, if it isn’t clear enough from that, is for those who are transitioning to a smartphone and those who are watching their purse strings closely.

Generally speaking, the 13-megapixel rear camera is particularly good at clicking photos with its ability to retain natural colors and contrast in bright light, and its performance isn’t marred by a sluggish camera app. Macro shots are also easy to set up, and the results are quite excellent. 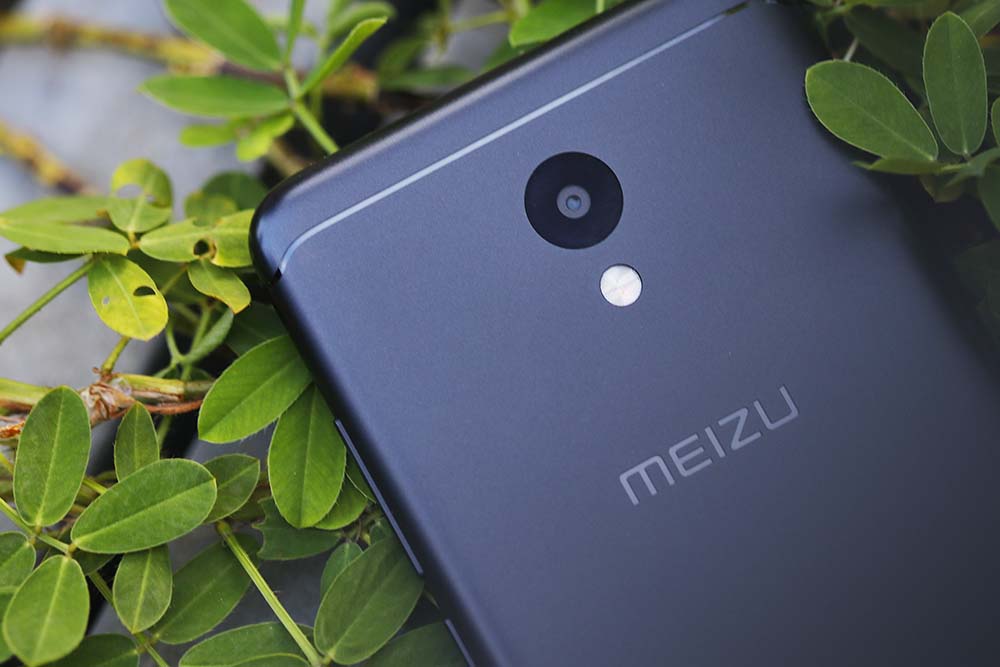 The M6’s 13-megapixel rear camera is particularly good at clicking photos with its ability to retain natural colors and contrast in bright light.

However, don’t get too riled up about the selfie camera. Despite the 8-megapixel sensor, image quality is typical of a low-end shooter: serviceable in daylight, but not as good when pushed to the limit. Focusing, too, can be hit or miss at times. 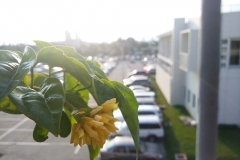 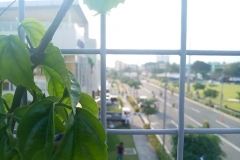 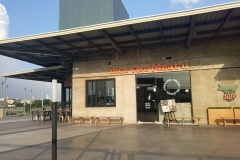 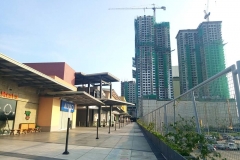 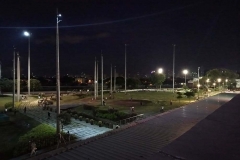 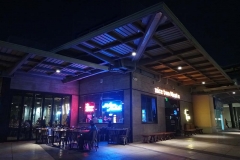 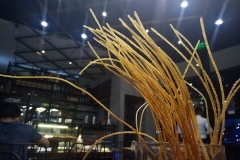 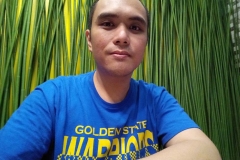 The octa-core MediaTek Helio P10 silicon with 2GB of RAM and 16GB of expandable storage is fine for general tasks. It doesn’t impress in terms of gaming performance, either, with intensive titles getting choppy when there’s loads of objects to move on screen.

To Meizu’s credit, our production unit isn’t using the final version of the Android Nougat-based firmware, so it might perform better with time if the company keeps on working on it — and engineers are, we’re told. Casual games that don’t require heaps of processing muscle will run without issues.

Navigating the heavy-handed interface is joy and a reminder that not all budget handsets are created equal, and apps launch fast, although word of advice: Be diligent in clearing them from the background.

Even though it doesn’t improve on its predecessor by a great deal, or in ways one would expect, the Meizu M6 stands as one of the better introductions to Android. 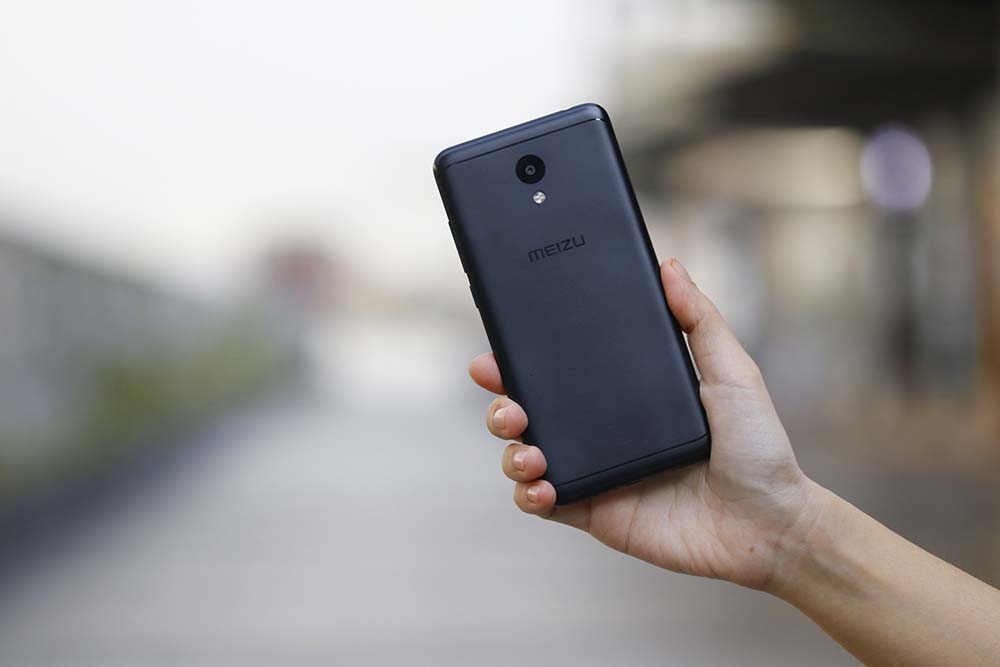 The Meizu M6 stands as one of the better introductions to Android.

Some of the hardware choices, including the likable LCD display — which is neither small nor large — and the rounded unibody construction that doesn’t rely on cheap-feeling plastics, will be appreciated by many.

The main camera doesn’t add another sensor, but who’s counting when the results are pretty great? For a lot of customers, the overall package will suffice, even if the graphics performance isn’t exhilarating.

Pricing hasn’t been announced anywhere for obvious reasons, but the Meizu M6 could retail between P7,000 (approximately $136) and P8,000 ($156) in the Philippines, similar to the M5 at the time of its release. When exactly will it be available? We still don’t know.

The thorny question that needs answering is whether you should upgrade to another, more expensive phone that has more to offer. To which we say: If you’ve got the cash to spare, there are plenty of options out there that will suit your specific priorities. But if every peso matters, the Meizu M6 won’t leave you feeling like you compromised.

#RevuLive episode broadcast yesterday, September 16, where we showed the unannounced Meizu M6 (and talked about the alleged Xiaomi Mi Home store in Makati City). Jump to 20:45 for the Meizu part.