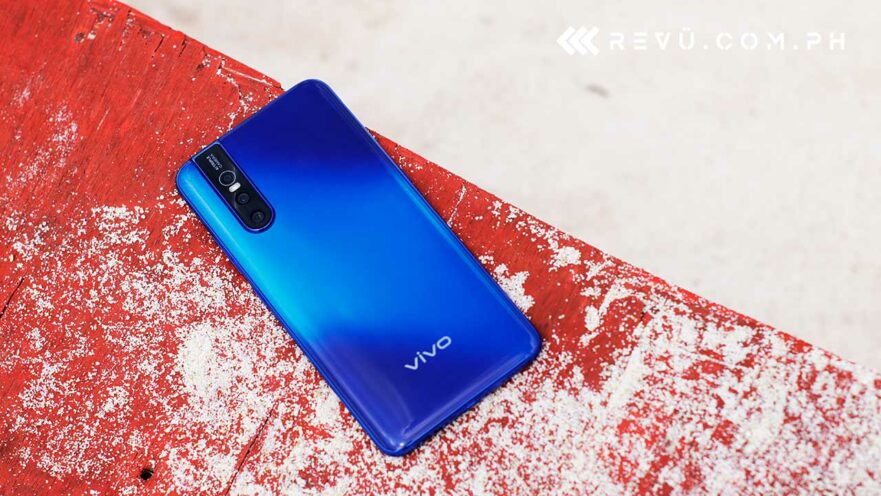 Vivo recently flew us to the resort island of Boracay in the Philippines to take pictures with its latest smartphone, the Vivo V15 Pro, which is now available in stores for a price of P23,999 (roughly $464 converted).

In the three days we were able to spend in Boracay’s powdery-white beach fronts and wide range of accommodations and locations, we had the device with us as our daily driver. Here’s what we think of it.

We already covered the hardware and gaming performance of the Vivo V15 Pro in a separate post, so if you’re wondering whether this phone will be able to play the most demanding games on the Google Play app store, the short answer is yes.

SEE ALSO: Vivo V15 Pro gaming review: One of the best in the segment

Powered by a Qualcomm Snapdragon 675 mated to 8GB RAM, the V15 Pro can handle pretty much everything you throw at it with relative ease, be it a graphically sumptuous title like PUBG Mobile or NBA 2K19. And multitasking is buttery smooth, too.

So back to the cameras: The back-facing camera unit has three sensors. The main camera is 48 megapixels and sits behind f/1.8 glass; the ultra-wide-angle option is 8 megapixels and has an aperture of f/2.2; and the third sensor is a 5-megapixel depth sensor for bokeh shots. More impressively, the 32-megapixel, f/2.0 front camera is only visible when in use and pops up from the inside the top portion of the phone.

Overall, the camera package is easily one of the best selling points for the Vivo V15 Pro. It’s got great hardware, with the ability to capture scenes at various focal lengths. And on top of all those cameras, you get a handheld Night mode, which we’ll get to in a bit, that helps out in producing clear and detailed images in the dark or under poor lighting.

But you don’t have to take our word for it. Check out these pictures of beautiful Boracay shot on the V15 Pro’s rear and front cameras. 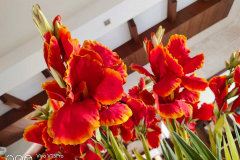 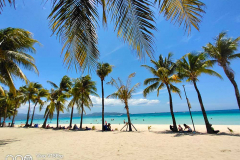 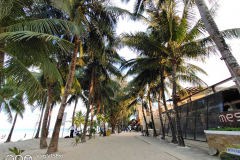 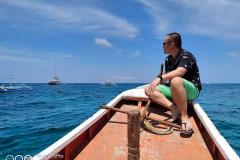 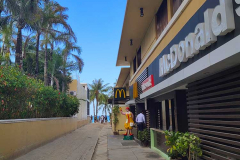 Pictures taken in the daytime

As expected, the photos we took during the day look the best of the lot. The colors look accurate for the most part, and there is a good amount of sharpness all around. The 48-megapixel main camera, notably, brings out more highlights and shadow details than the wide-angle shooter, besides being capable of providing crisper and cleaner shots.

The camera app also includes an AI Scene Identification option that will optimize the camera settings according to the type of scene and shooting conditions to deliver the best image output. If you are the kind of person who’s after a straightforward point-and-shoot experience with your smartphone camera, this particular option should prove invaluable.

The ability take pictures with a sharp foreground object and a nicely blurred background is something most smartphone cameras can do. The Vivo V15 Pro is, of course, no exception. But thanks to its depth sensor, this phone will let you adjust the focus and blur effect of your portrait shots after the fact — and directly within the Albums (read: Gallery) app, too.

As for the quality of the bokeh images themselves, we think the standard blur level might be a little too strong for most people’s tastes, so it’s a good thing that it can be adjusted pretty easily in the same app that will be used to view them. 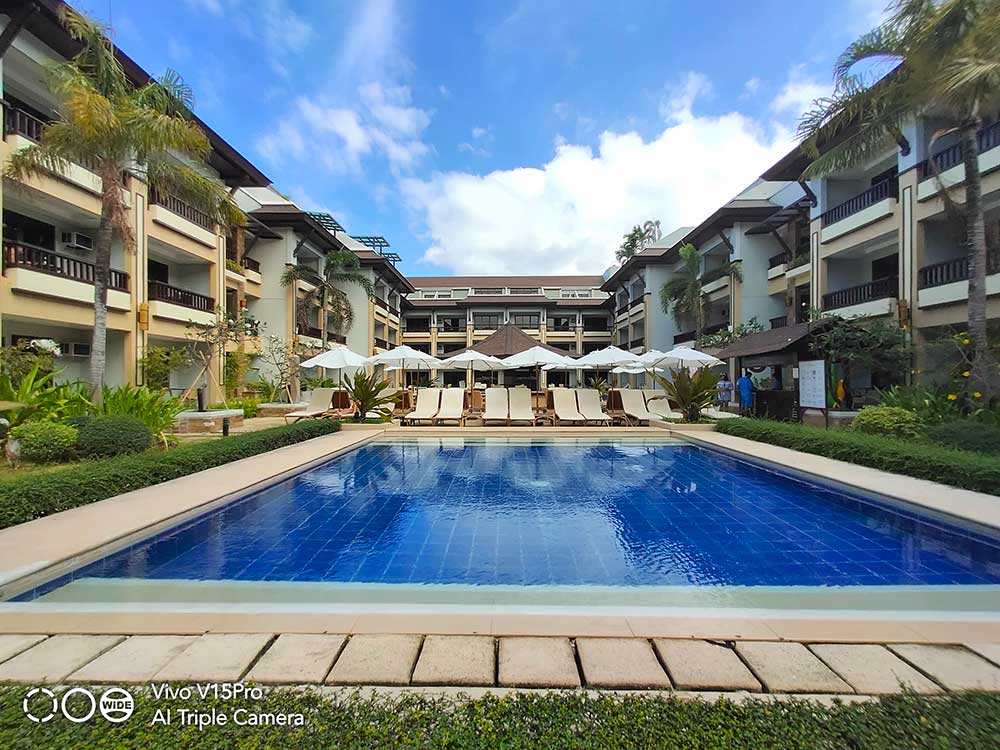 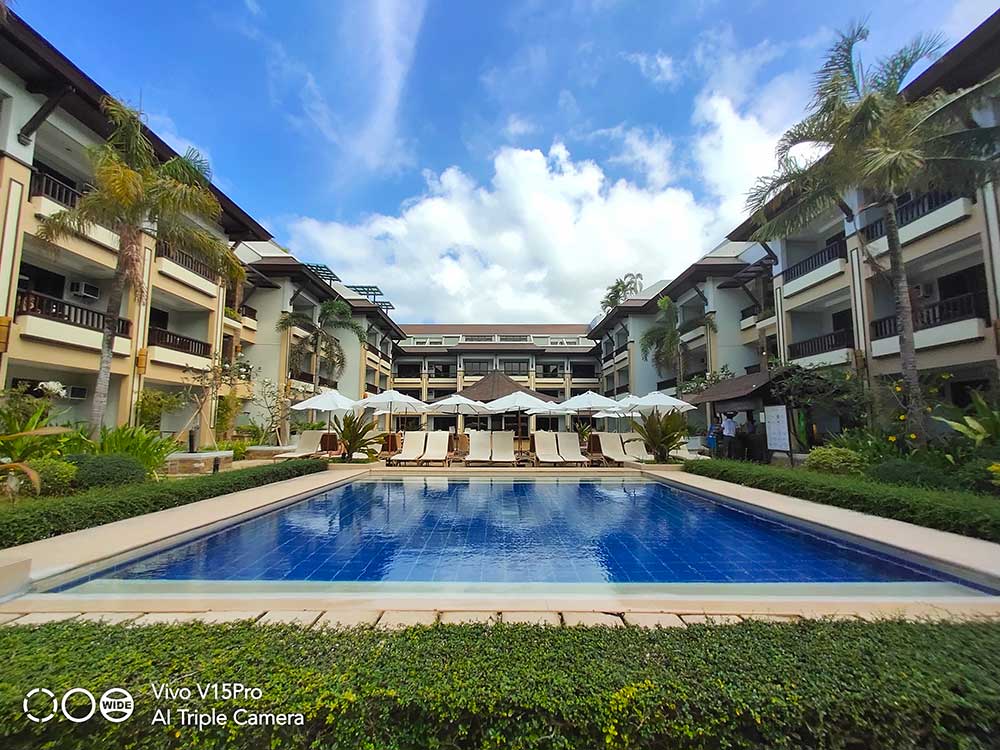 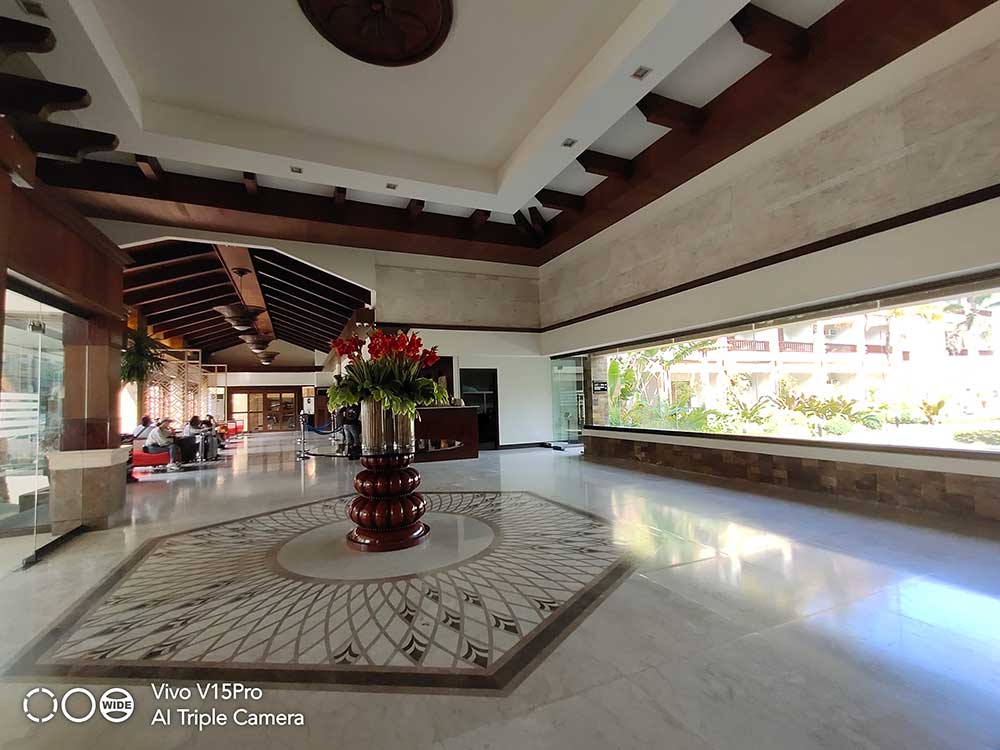 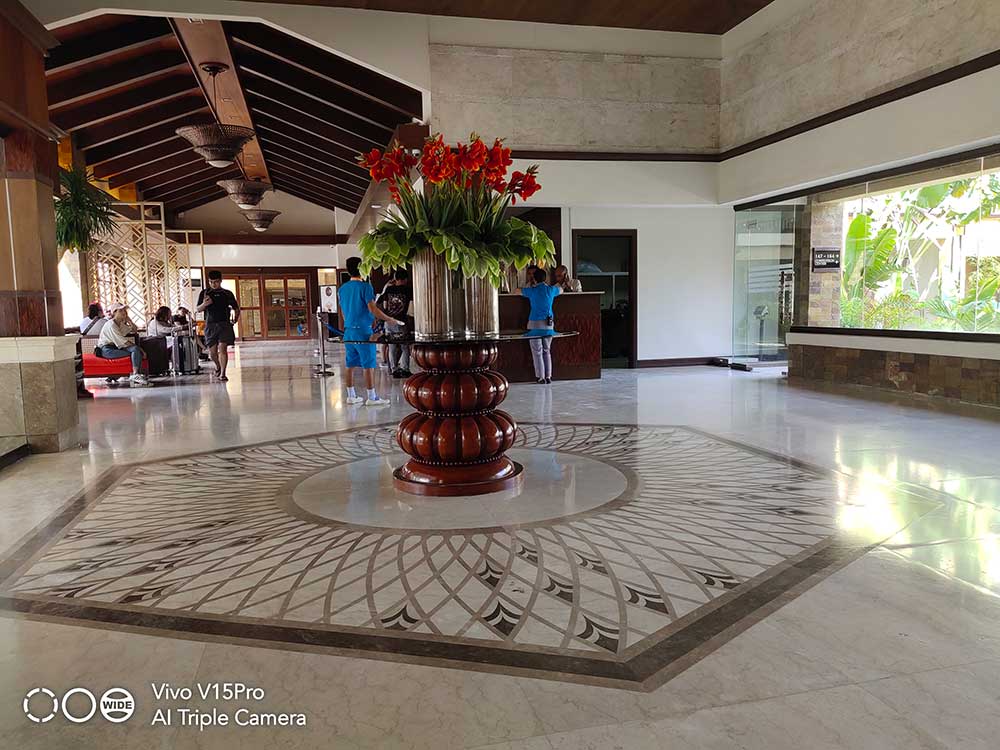 Above, we have some side-by-side comparisons between pictures shot on the Vivo V15 Pro’s 48-megapixel main camera and 8-megapixel ultra-wide-angle camera. Notice how the latter affects the angling and framing of the shot to reflect the beauty of the scenery, at the cost of some color fidelity and detail. However, the loss of sharpness won’t be obvious unless you crop heavily into an image.

Additionally, you can use the wide shooter for group shots, but not for macro photography. Another downside is that you can’t utilize Vivo’s Night mode when using the wide camera. 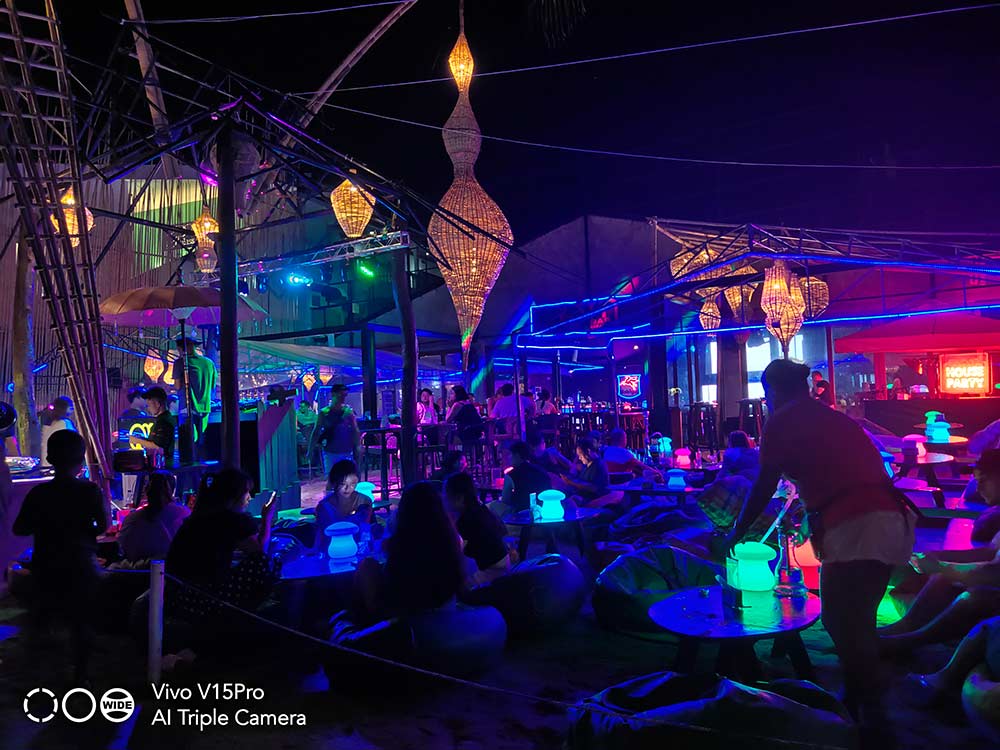 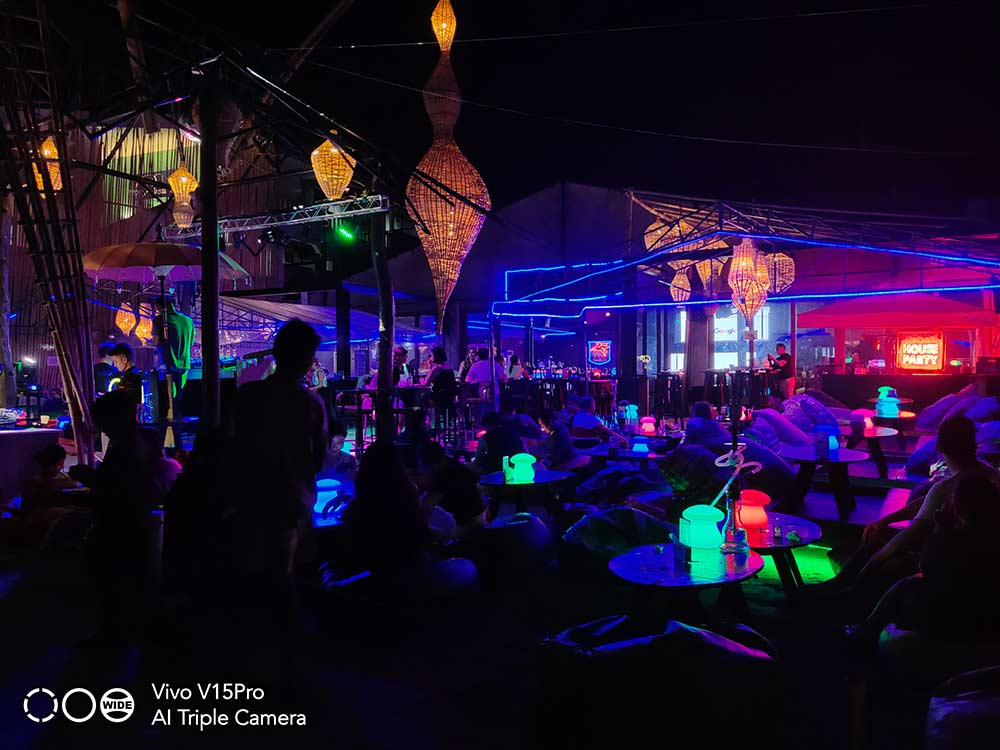 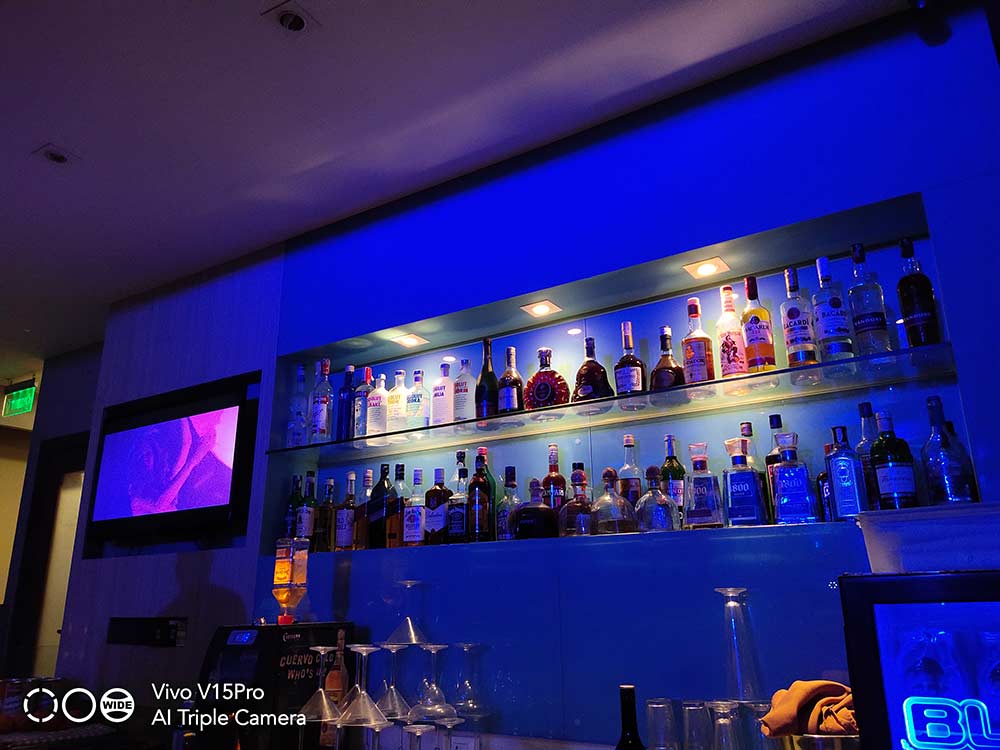 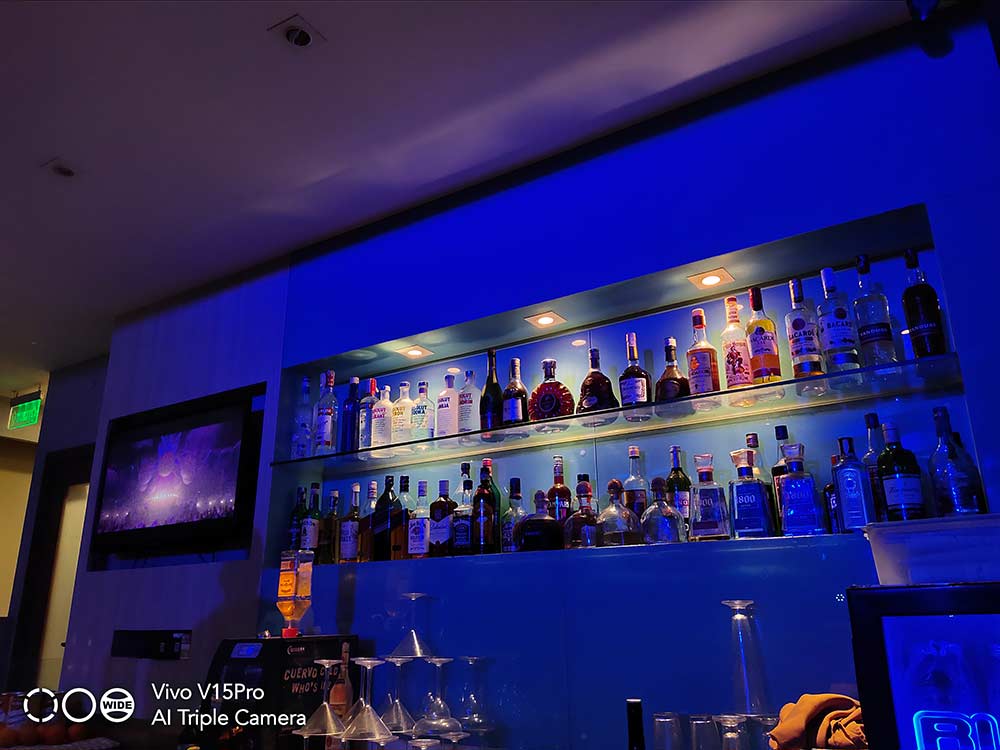 Here’s how the pictures captured in the V15 Pro’s Night mode compares with regular photos. The feature combines multiple exposure settings to produce low-light images with more vivid colors, greater detail, and less noise. Compare the different sets of pictures, and the difference is easily visible. A friend even noted that she thought one of the photos we posted on Instagram was an in-app advertisement, presumably taken with a professional camera.

Having an excellent selfie shooter has been the hallmark of almost every Vivo smartphone ever created. And though there’s no DxOMark review to back up the performance of the Vivo V15 Pro’s pop-up front-facer, it’s actually one of the best cameras we’ve used for selfies.

The colors are as accurate as we’ve ever seen from a phone’s front camera, our facial features look sharp, and skin tones are where they should be. Moreover, the HDR setting works well when it kicks in as you’re shooting in direct sunlight.

The camera app also has an AI Beauty mode that will automatically tweak your selfies so that your skin looks smooth and flawless.

The Vivo V15 Pro can record 4K video at up to 30 frames per second, which is impressive given its palatable price point. It also shoots at 1080p at a higher 60fps, which will allow you to slow down motion to give your footage a cinematic quality. In our testing, we found the device’s video-recording capabilities to be decent, although the focusing can be much better.

Other things you should know

The V15 Pro has a 3,700mAh built-in battery inside that regularly lasted us a day despite using the phone a lot to take photos and video. What’s more impressive, however, is Vivo’s Dual-Engine fast charging that can top up the battery to full capacity in about an hour and a half. We also like that the screen will always display the battery percentage while charging, to let you know exactly how much juice is available and whether you need to unplug the charger already.

There’s also a fingerprint reader built into the screen, which makes it convenient to unlock the device without using face unlock via the pop-up camera. The sensor is fast and mostly accurate, definitely one of the best implementations of the technology we’ve ever seen.