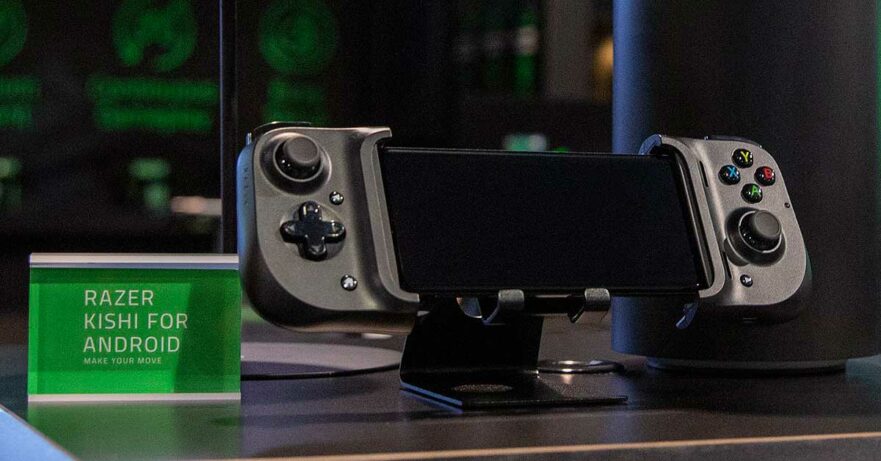 Razer announced a new mobile gaming controller for smartphones at CES 2020, and it looks a lot like the Razer Junglecat controller it launched late last year. And, yes, a reference can be made to the Nintendo Switch‘s Joycon controllers as well.

Unlike the Junglecat, however, the Razer Kishi is designed to work with Android and iOS devices (though there are separate versions for each operating system), as opposed to four specific phones, which limited the former’s appeal. Razer has obviously learned from this.

But in addition to making an accessory that pairs with most modern smartphones, it has improved on the design and functionality of the Kishi’s predecessor.

The new controller promises to deliver low latency gameplay for any game that allows for controller input because it doesn’t pair via Bluetooth. Instead, it plugs directly into your phone’s USB-C or Lightning port to connect and power itself.

The Razer Kishi also lets you charge your phone while you play, thanks to passthrough charging ports on the controller. It supports cloud gaming platforms such as xCloud, Google Stadia, and Nvidia GeForce Now, too.

The Kishi expands to accommodate a wide variety of screen sizes and features a pair of analog sticks, a d-pad, XYAB face buttons, and four shoulder buttons.

Experience the new Razer Kishi Mobile controllers for both Android and iOS. Built with console-level tactility and control with clickable analog thumbsticks and responsive buttons. Have victory follow you wherever you game.

The company says the Razer Kishi is the result of a multi-year licensing agreement with Gamevice, which also makes mobile gaming controllers for Android and iOS devices.

No release date has been set for the gaming accessory, and Razer has remained mum on how much it will cost when it releases. It did mention the Kishi will likely be priced similarly to the Junglecat, which currently retails for $100 (around P5,082) in the U.S.