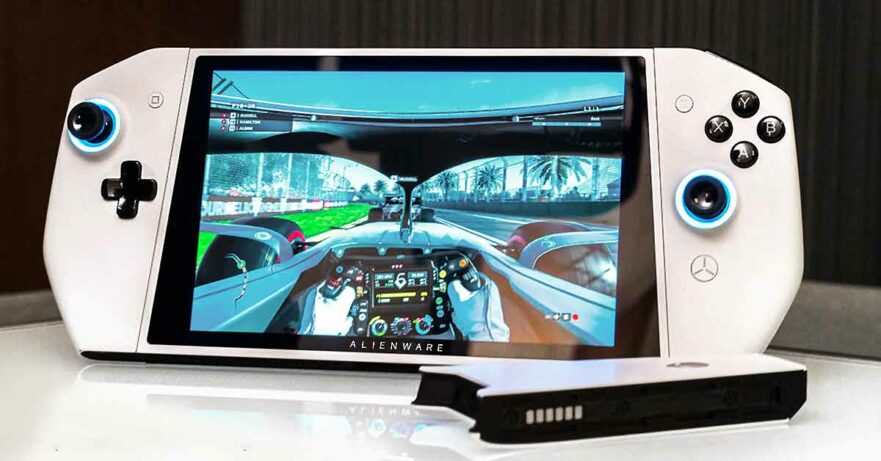 Dell’s Alienware brand has made a name for itself as one of the biggest names in portable gaming PCs, but the Alienware Concept UFO prototype is easily its handiest yet.

The Concept UFO, which was recently shown off at the CES 2020 trade show in Las Vegas, is essentially a gaming PC in a handheld form factor you can take with you on a plane, in a car, or pretty much anywhere you want.

Yes, like the Nintendo Switch. Except this machine with a screen and detachable controllers is designed to run Microsoft Windows 10 using a custom launcher and play PC games locally while on the go. Its controllers can likewise slide into a grip to produce a traditional gamepad.

Dell says it spent “hundreds — if not thousands — of hours on the controller design features and ergonomics” to get the hardware right. The company must be on the right track, because its prototype has drawn numerous favorable comparisons to the Nintendo portable that inspired it.

You can dock the Concept UFO to a TV or monitor, but it also comes with its own kickstand when you want to play games hands-free. Because it is still a work in progress, the final specifications could change over time. It really depends on when it releases.

The device on the show floor uses an Intel 10th-gen Ice Lake processor and is powered by a 65-watt power brick. It plays F1 2019, World War Z, and Mortal Kombat 11 at decent frames, albeit at fairly low settings. The screen is 8 inches with 1,900 x 1,200 resolution. Above the display, you’ll find the power and volume buttons, a USB-C port, and a headphone jack.

Despite Alienware pulling back the curtains on something new and genuinely exciting, it also left many questions unanswered. When will the device be available? How much will it cost? At this point, we don’t have the answers.

But the Concept UFO is definitely something to watch moving forward. Even with alternative gaming platforms that promise the same mobility and access to a rich library of games like Google Stadia already on the market, Alienware’s new handheld gaming machine could stand out as the ultimate mobile solution hardcore PC gamers have been looking for for a long time now.

More Concept UFO-related details should be announced at the #DellExperience event at CES 2020. The livestream starts at 10 a.m. Pacific Time on January 7 (2 a.m. on January 8 in the Philippines)