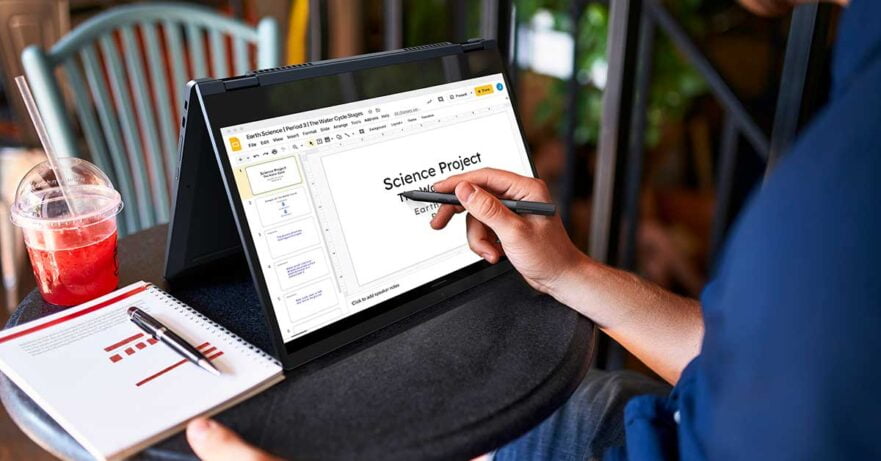 Besides the new additions to its ThinkVision portfolio of monitors and webcams, Lenovo has announced refreshes across its ThinkPad laptops and IdeaPad Chromebooks at the 2021 edition of MWC [Mobile World Congress].

They include the ThinkPad X1 Extreme Gen 4 available with 11th Gen Core i9 processors and the latest-gen Nvidia GeForce RTX laptop GPUs. Another highlight is the 13-inch IdeaPad Flex 5i Chromebook with a 360-degree hinge and up to an Intel Core i5 processor.

The Lenovo ThinkPad X1 Extreme Gen 4, ThinkPad L13 Yoga Gen 2 (AMD), and ThinkPad L13 Gen 2 (AMD) will be available in select countries and regions beginning August. The Lenovo IdeaPad Flex 5i and IdeaPad 5i Chromebooks, on the other hand, are expected to hit stores from June and July, respectively. No pricing and availability details for the Philippine market are available at the moment, but we’ll update you as soon as we have them.

Lenovo ThinkPads and IdeaPads we featured here. For pricing, refer to the info below

A powerhouse laptop designed for prosumers, the fourth-generation ThinkPad X1 Extreme looks familiar, but brings a new 16:10 screen aspect ratio to the picture, alongside display options up to 4K and a GeForce RTX 3050Ti, RTX 3060, RTX 3070, or an RTX 3080 GPU with 16GB of GDDR6 memory for the latter.

It can be configured with up to 64GB DDR4 RAM and two 2TB M.2 PCIe SSDs as well. Plus the 90Whr battery promises more than 10 hours of battery life for all-day usage.

The ThinkPad L13 Yoga Gen 2 is Lenovo’s first convertible laptop with an AMD Ryzen processor under the hood. It can be configured with up to an AMD Ryzen 5000 Pro series chip.

It’s better suited for hybrid work than most other notebooks, boasting flexible docking options; a multi-mode form factor; up to 10.6 hours of all-day usage from its 46Whr battery. Like the newest ThinkPad X1 Extreme, it supports pen input as well.

While not as flexible as the Yoga variant, the regular L13 comes with the same core components as the L13 Yoga and offers longer battery life on the non-touchscreen variant.

Combining narrow bezels with a dual-tone design, the 14-inch Lenovo IdeaPad 5i is a stylish premium Chromebook with up to an 11th Gen Intel Core i5 CPU and as much as 512GB of SSD storage. It also promises clear audio courtesy of enhanced stereo speakers certified by Waves MaxxAudio, making it ideal for schoolwork and streaming media through apps such as Spotify and Netflix.

Compared to its non-Flex stablemate, the IdeaPad Flex 5i is a convertible that offers more versatility with its flexible-hinge design and optional pen sensitivity with the Lenovo Digital Pen. And because it runs Google Chrome OS, you can run Android apps on this notebook, too.