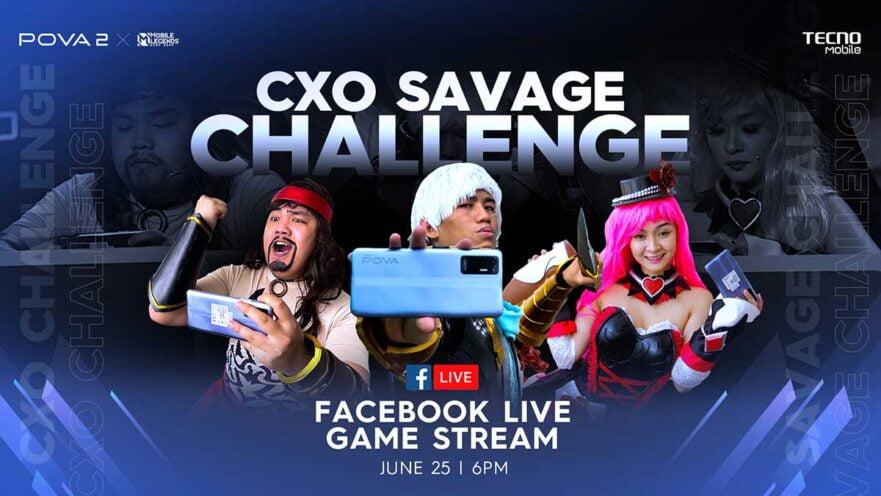 Following the success of the first Tecno POVA 2 and Mobile Legends: Bang Bang event earlier this month of June, the partnership is back with another round of intense mobile gaming and loads of prizes to be won. A second powered-to-win gaming event will be streamed live on premium smartphone brand Tecno Mobile’s Facebook page at 6 p.m. on June 25.

Top mobile gamers Kay Ann Monsalve, Ghostwrecker, and Junnie Boy — who were part of Team POVA during the first livestream show match — will be back, but this time as special guest shoutcasters. The guest gamers will don their cosplay gear. They will be joined by event host Phaister for the livestream, which will once again showcase the power of the Tecno POVA 2, the ultimate smartphone for playing the popular multiplayer online battle arena game Mobile Legends.

Viewers can look forward to three epic rounds of MLBB gameplay, featuring top competitors from Tecno Mobile’s POVA 2 Power CXO Program. The CXO [Chief Experience Officer] Program was launched by the brand to provide support for aspiring Filipino game streamers. To participate, gamers needed to create and share their own MLBB streams on social media. Potential CXOs with the highest engagement among the participants were selected by Tecno Mobile, forming two teams of five players each, to compete in a show match during the June 25 event. The champions will win 1,000 Mobile Legends Diamonds, POVA 2 mobile phones, and gift sets.

Also to be featured at the event is the awarding of winners of the Tecno Mobile Savage Challenge. It takes the perfect combination of a great game and a powerful smartphone to achieve a savage kill, or the ability to defeat five enemies at once. Challenge participants showed off their impressive gaming skills, and celebrated their victories by posting their Mobile Legends savage kills on TikTok and Facebook. Tecno POVA 2 smartphones and MLBB Diamonds will be given as prizes to the challenge winners.

The Tecno POVA 2 is powered by a MediaTek Helio G85 gaming-focused processor and System Turbo 2.0, with an ET Game Engine that boosts a player’s ability to win, plus a big 7,000mAh battery, making it a gameplay enhancer that allows even beginners to play like gods. The device’s key features include the following:

The POVA 2 is available at the Tecno Mobile flagship stores on Lazada and Shopee, as well as partner retailers, at a low price of P7,990 (roughly $164).

Check out the power-packed livestream event on June 25, and experience how #TogetherWeAchieveMore with TECNO Mobile and Mobile Legends: Bang Bang. Over 75 prizes will be given away to lucky viewers, including POVA 2 units and Mobile Legends Diamonds and game skins.