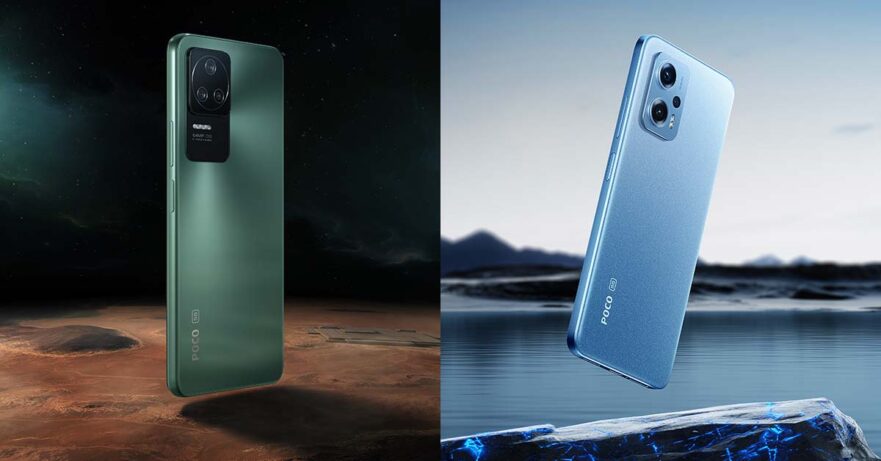 POCO has unwrapped its latest smartphone powerhouses — what it calls its “flagship all-arounder” and “speed expert” — globally.

The 5G-enabled POCO F4 and POCO X4 GT have been launched with the promise of best-in-class performance on all fronts. And the good news is both will be released in the Philippines, among other markets. You can find their respective regular and early-bird prices and availability details below:

True enough, this POCO is a tweaked version of the Redmi K40S model that’s available in China. Instead of a 48-megapixel main sensor on the back, though, the F4’s triple-camera system is headlined by a 64-megapixel unit with optical image stabilization or OIS.

At the heart of the smartphone is a 7nm Qualcomm Snapdragon 870 5G chip to give you that flagship-level performance and efficient power consumption. It offers the former Xiaomi sub-brand’s highest frequency prime core running at 3.2GHz. And with LiquidCool Technology 2.0, the CPU should get cooled down faster when under pressure.

The Android 12-based POCO F4 likewise features a 4,500mAh battery with support for 67-watt quick charging to help take the device from 0% to 100% in just 38 minutes.

The screen is of the E4 Super AMOLED kind and has TrueColor technology, 1,300 nits of peak brightness, 100% DCI-P3 color gamut, and support for HDR10+. The refresh and touch-sampling rates are set to a maximum of 120Hz and 360Hz, respectively. Housed in its teeny-weeny, 2.76mm punch hole — or DotDisplay, as Xiaomi calls it — is a 20-megapixel selfie camera.

Now, this model is another rebrand as well, with the phone sharing similarities with the Redmi Note 11T Pro that’s being sold in China.

Geared for those into high-performance mobile gaming and entertainment, the POCO X4 GT is powered by a 5nm MediaTek Dimensity 8100 5G processor and features LiquidCool Technology 2.0 cooling system.

The X4 GT is equipped with a 5,080mAh battery that can be fully charged in a mere 46 minutes, thanks to 67-watt turbo-charging support. There’s a 6.6-inch LCD screen with a 144Hz refresh rate and support for HDR10 and Dolby Vision, a 64-megapixel triple camera on the back, a 16-megapixel selfie sensor up front, and a side-mounted fingerprint sensor. The handset is running MIUI 13 with Android 12 on top, too, just like the other newly launched POCO.