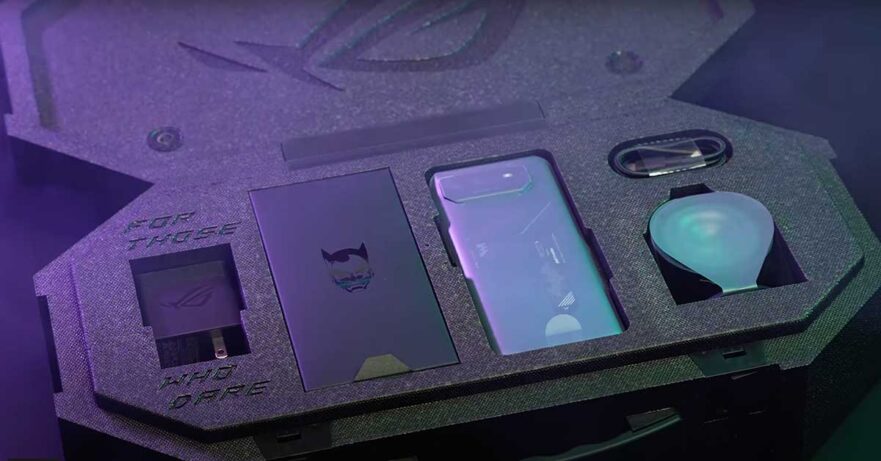 In addition to the ROG Phone 6D and top-shelf ROG Phone 6D Ultimate, which we recently featured in a video, ASUS launched the limited-edition ROG Phone 6 Batman Edition, which ships with a MediaTek Dimensity 9000 Plus or Qualcomm Snapdragon 8 Plus Gen 1 5G chipset.

In Europe, this new Dimensity-based special-edition gaming phone will be priced at €1,199 (roughly P68,867 in Philippine pesos or $1,200 in U.S. dollars) for the lone 12GB RAM and 256GB storage variant. It should hit international markets later this year, too. The version with a Qualcomm chip, on the other hand, will be available in North America at a yet-to-be-determined price and date.

The Batman Edition comes in a hard-shell carrying case with the Batman X ROG logo, alongside a few matching accessories, including a Batman-themed Aero Case and SIM-eject tool and a miniature LED Bat-Signal projector that can be powered by a USB-C cable.

As for the specs, the ASUS ROG Phone 6 Batman Edition is similar to the vanilla ROG Phone 6 and ROG Phone 6D, but flaunts a semi-matte finish with an RGB Batman logo on the rear panel. You also get custom live wallpapers, charging animations, Always-On Display styles, call screens, and other theme elements to tie everything together on the software side.

As we mentioned earlier, the newly launched smartphone is identical to the regular model, specs-wise, so expect a 6.78-inch 165Hz AMOLED display with FHD+ resolution, a triple-camera array headlined by a 50-megapixel Sony IMX766 sensor, a 12-megapixel selfie shooter, and a 6,000mAh battery that supports 65-watt fast charging — all in an IPX4-rated splash-resistant body.