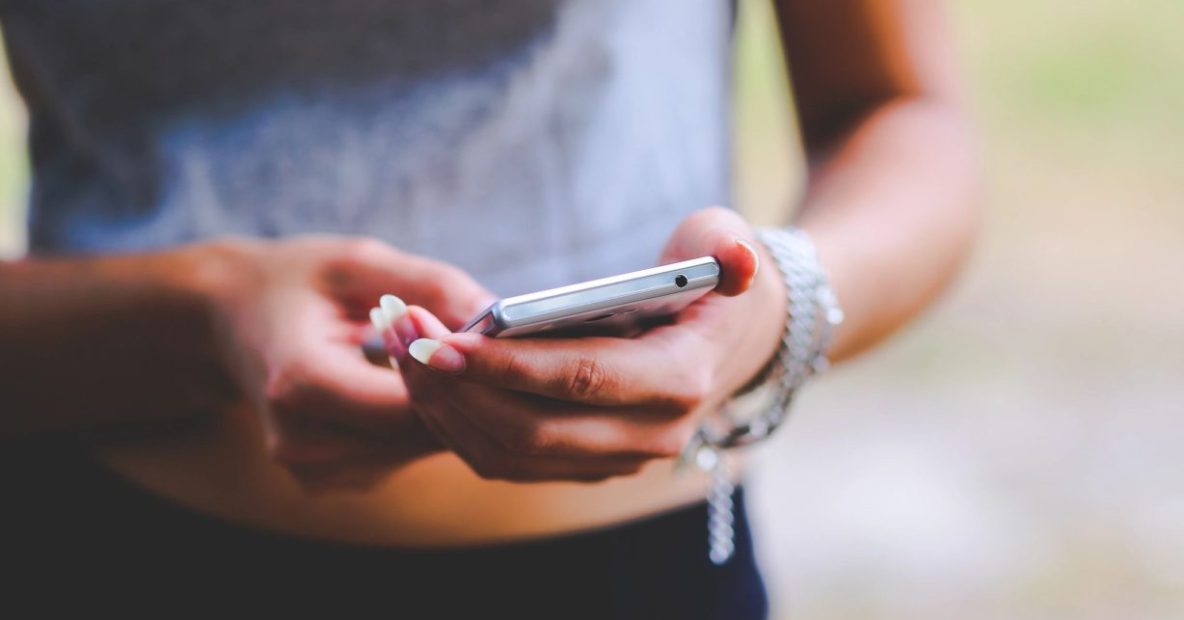 HOPPED in an Uber anywhere in Manila recently? You may have noticed an all-in, fixed fare on the Uber app, as opposed to a suggested fare that could be more expensive or cheaper than the actual fare.

You’re not alone. Uber users across Manila should start seeing what the company calls “upfront fares” before they step into an UberX the same way they would if they booked an UberPOOL or Grab car. The new rates take into account all the factors that affect the price of a trip, including surge and toll charges. We’ll let Uber get into the nitty-gritty details.

Upfront fares will be calculated using the trip’s expected time and distance, and will take into consideration the traffic situation and availability of drivers at the time of the request. When fares go up due to increased demand, instead of surge notifications and estimated fares on UberX, riders will be quoted the actual price of the trip, so they are certain of what they pay before they request.

However, the change does come with one asterisk, and that is that changing the destination or route or making multiple stops will cause Uber to generate a new price based on the distance and duration of the ride. This has been implemented due to a rise in unfortunate incidents on the road which have been linked with the taxi company. If you have found yourself in a situation whereby Uber or another taxi company is at fault, be sure to check out, https://battafulkerson.com/practice-areas/uber-accident-attorney/. When getting into an uber or taxi it is important to remember that accidents might happen. It is no different to driving a car after all. That’s why if you are ever in an accident, you should take a look at someone like these uber accident lawyers
to help you with your case. You may never have an accident, but you never know. So it’s better to be on the safe side, particularly if you get hurt in the accident. Getting a lawyer will help you with getting the compensation that you deserve after being injured in the uber accident.

Changing the destination or route or making multiple stops will cause Uber to generate a new price based on the distance and duration of the ride.

Upfront fares are particularly helpful for riders who pay in cash and those who don’t want to pay the price of a dinner out for two or more for a ride home on a Monday or Friday night. (Metro Manila commuters would know what we’re saying.) They couldn’t have come at a better time, too, as traffic continues to worsen in the Philippine capital. And knowing how much each UberX ride will cost could get more people to use the service more often.

On that note, we compared the fixed prices of UberX and GrabCar to determine which service is cheaper. Our methodology was pretty straightforward, but admittedly unscientific: Using the Uber and Grab applications on one phone, we booked the same destinations from the same pickup locations at the same time. We booked trips on Friday afternoon and Monday morning at times when the roads were busy and on Sunday evening when traffic was light.

Some of the results from Friday’s bookings can be seen below. 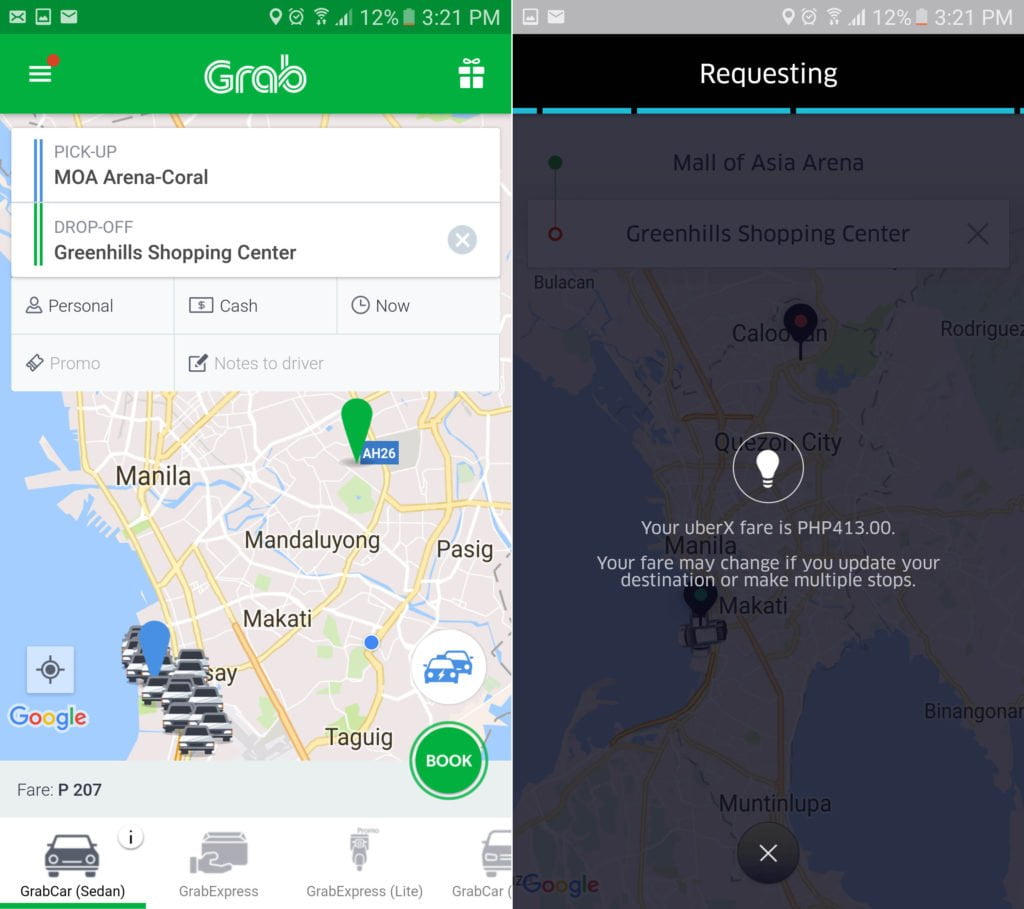 Uber vs Grab: MOA to Greenhills 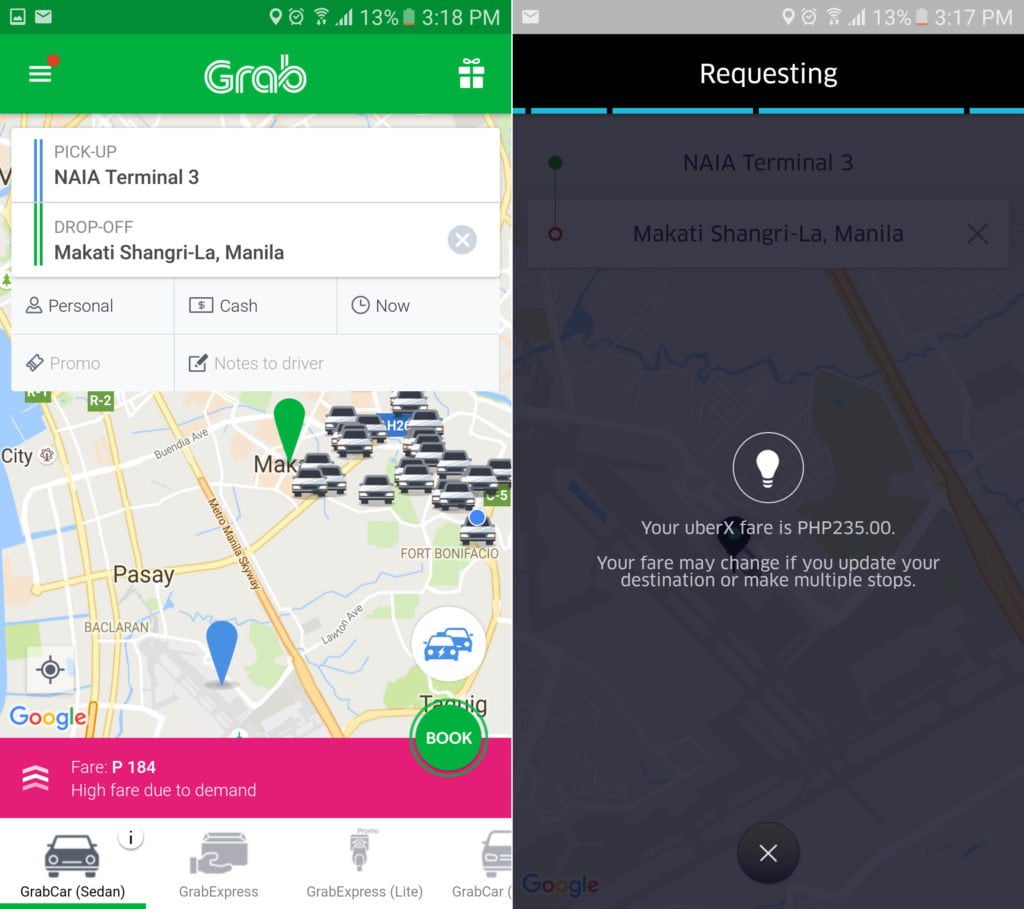 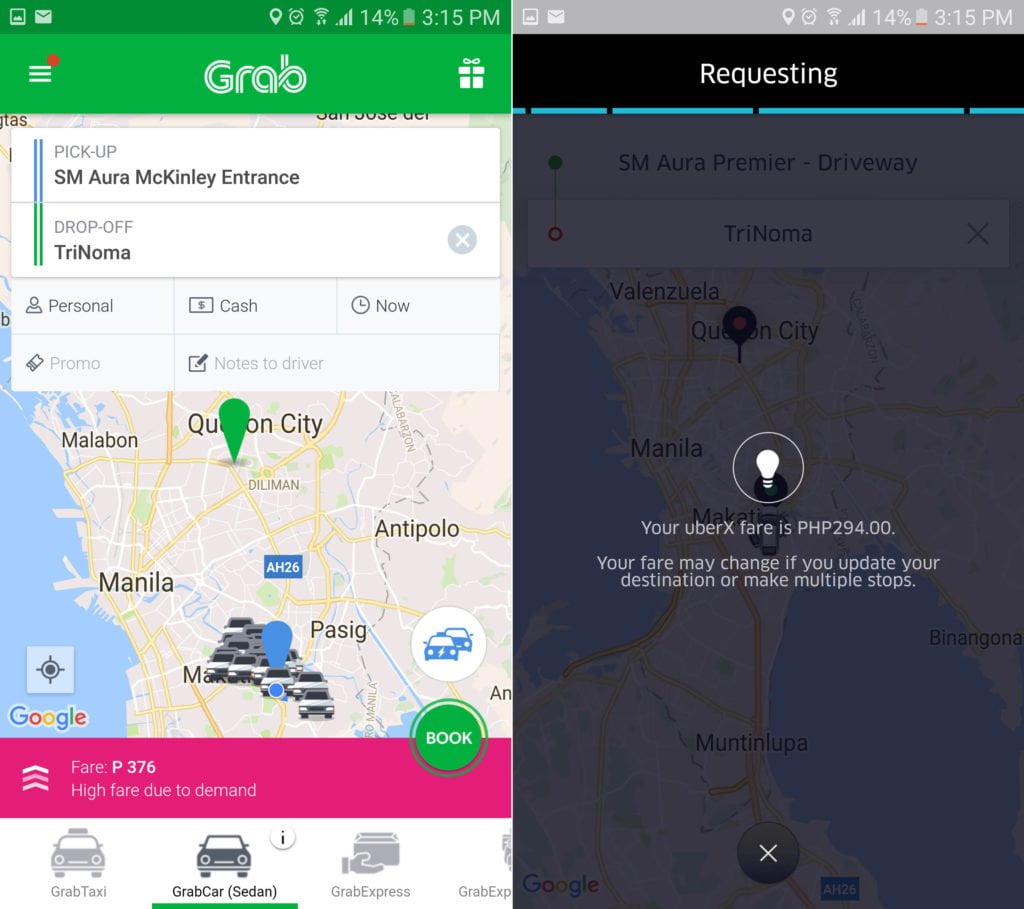 And one example from today’s bookings. 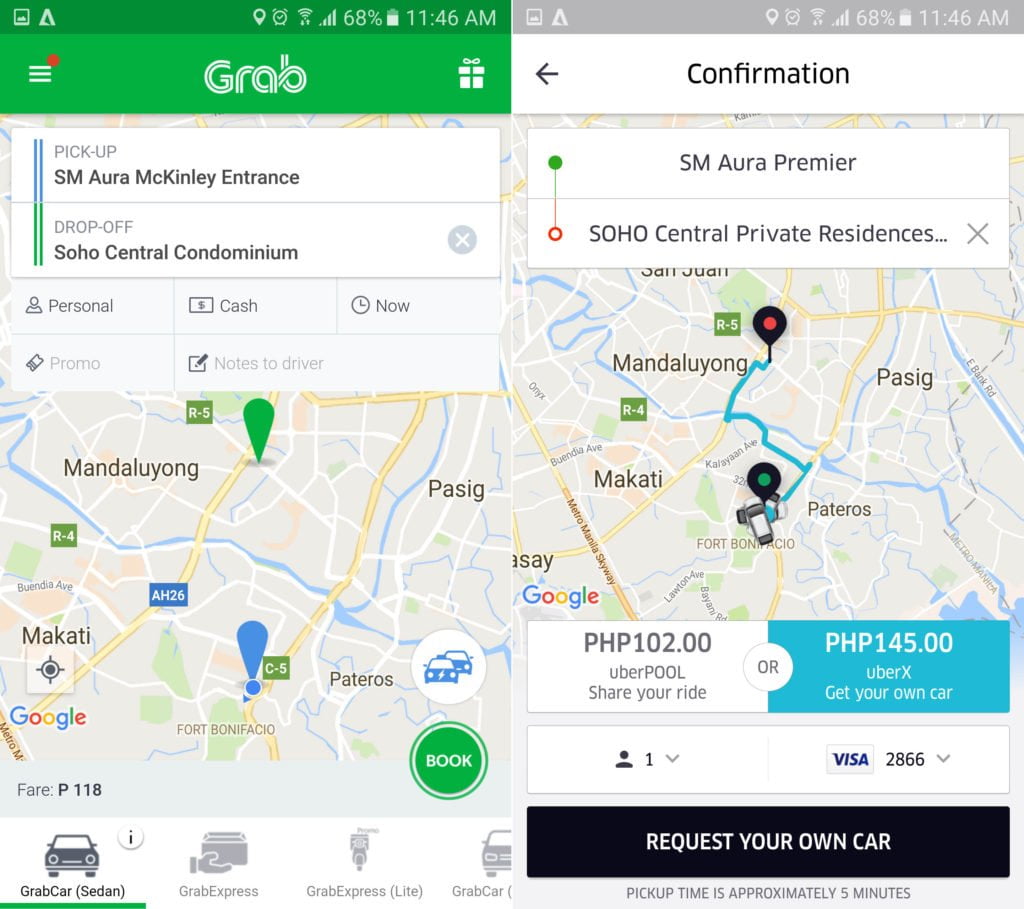 These are some of the screen grabs from Sunday. 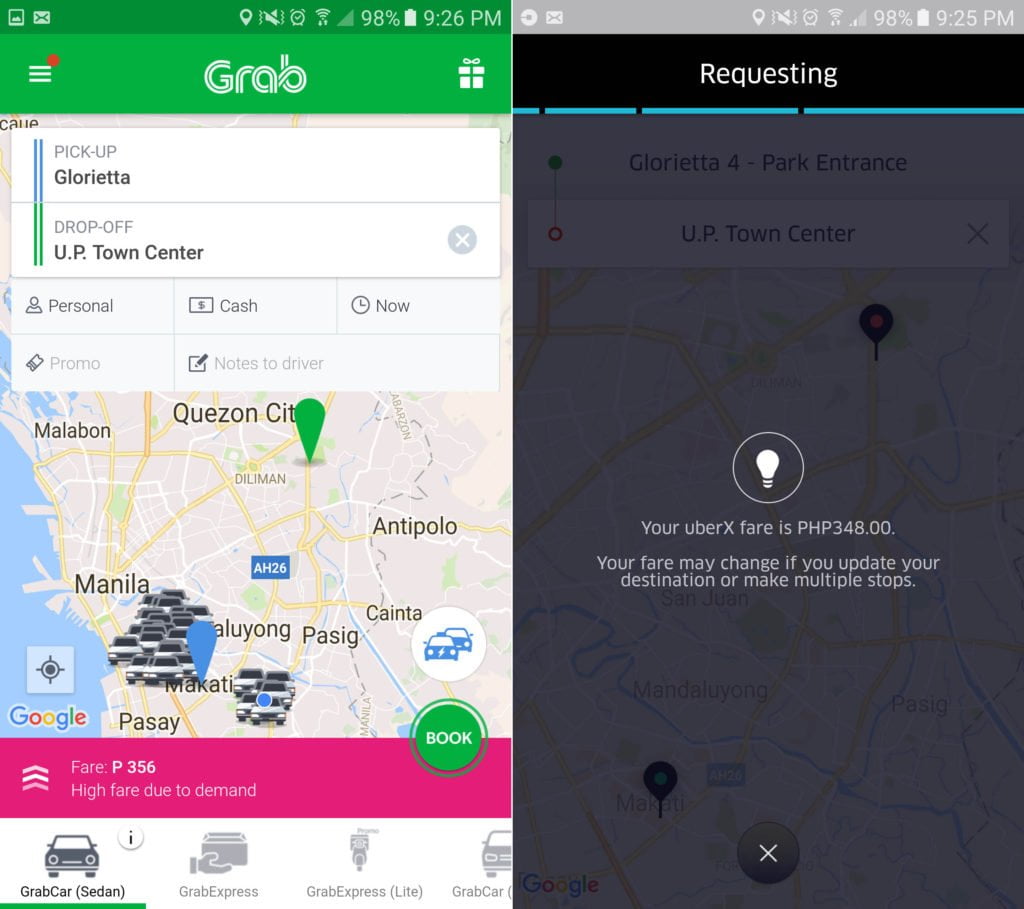 Uber vs Grab: Glorietta to UP Town Center 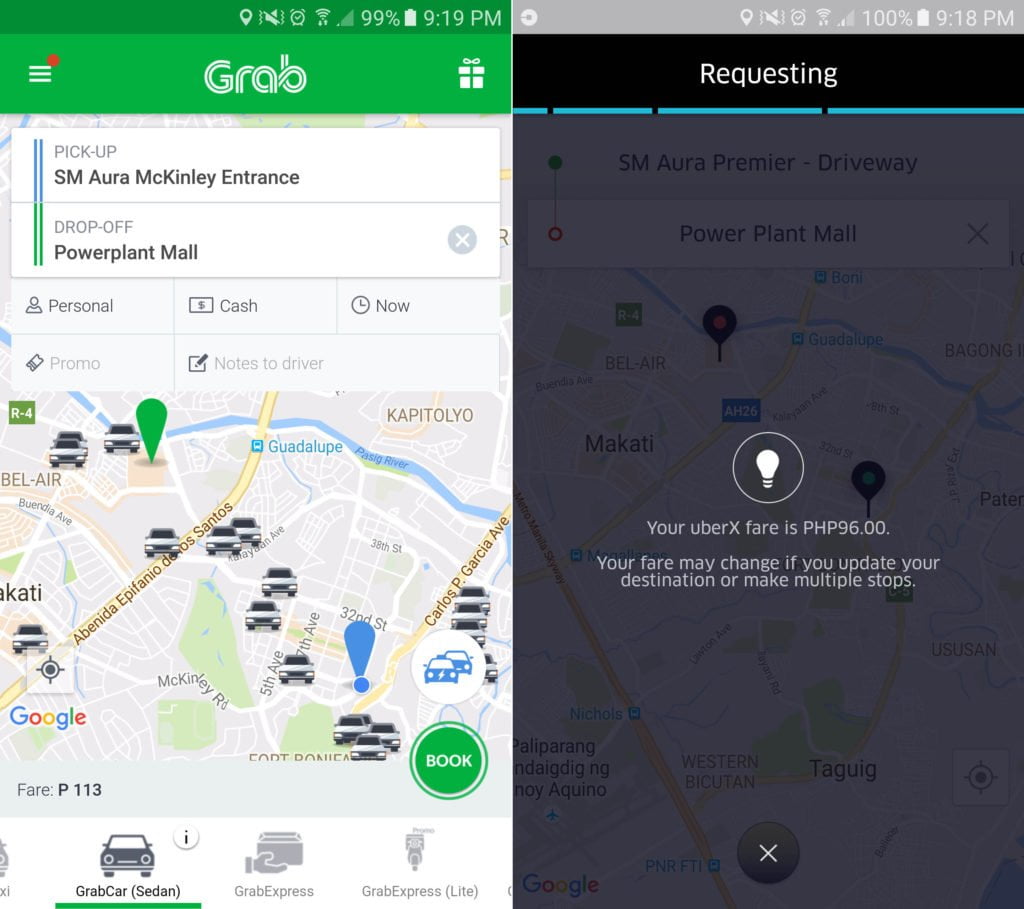 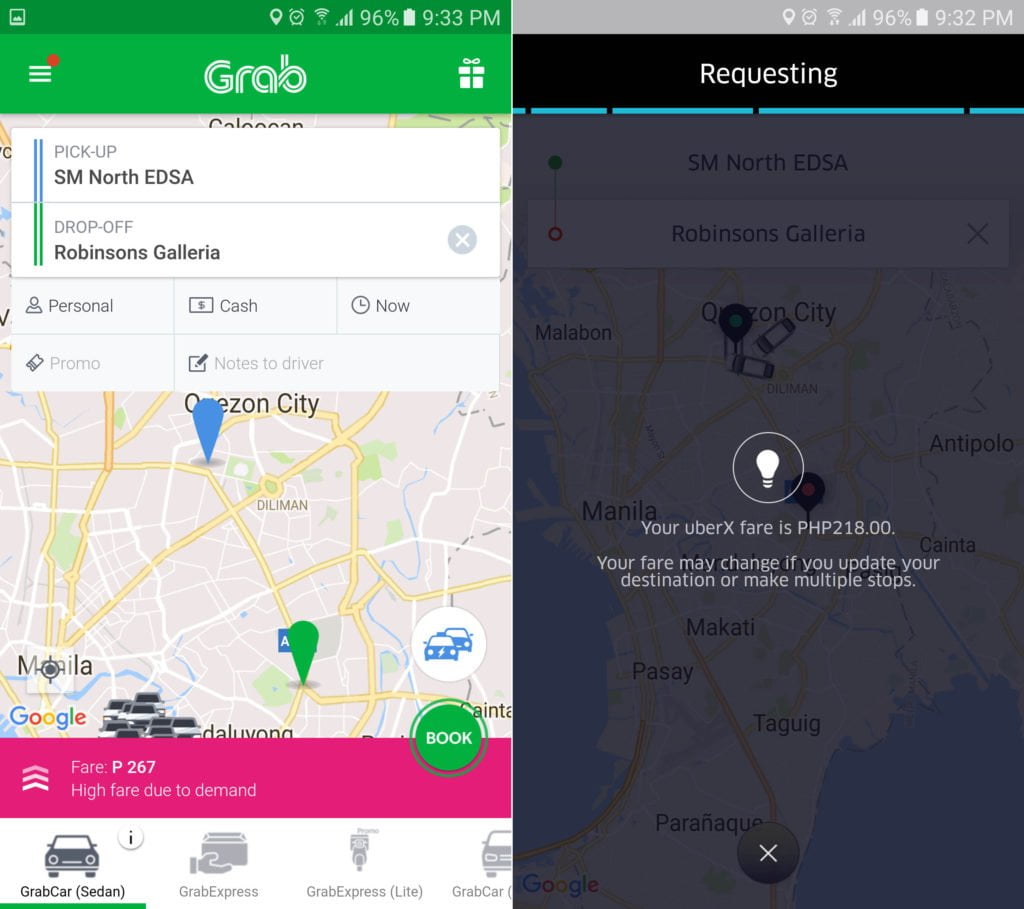 If you were rooting for Uber or Grab to stand out, then we hate to break it to you, but there’s no clear winner here. However, it bears noting that based on our experience, GrabCar fares tend to be cheaper during rush hour thus far, and UberX prices tend to be lower when traffic isn’t bad, but only by a little. It’s also worth pointing out that Uber’s fares — unlike Grab’s — can still change.

Our advice? Compare fares first; if they’re similar enough, go with the ride-hailing service you prefer and the one that has treated you better so far.