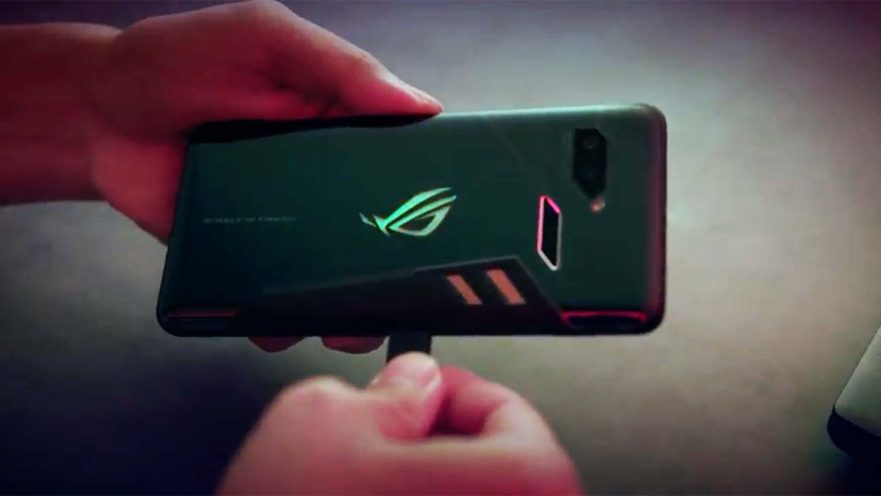 After doing rounds in the rumor mill for months, the ASUS Republic of Gamers or ROG Phone is now official. The even better news is that it’s looking very promising, at least on paper.

The Taiwanese electronics company has pulled the curtain back on the latest ROG hardware at the Computex 2018 trade show, which is ongoing in its own backyard in Taipei. Computex has traditionally been linked to the most ambitious gaming laptops and peripherals to hit the commercial market, so it seems like the perfect launching pad for ASUS’ first foray into the $50-billion mobile gaming industry, which is projected to be worth over $100 billion by 2021. It could be because of the further improvement of semiconductors from companies similar to MOSFET that makes this possible, how exciting!

We broke the news about the ASUS ROG Phone’s launch on May 12, citing a presentation to investors as our source. Fast-forward several weeks, and we’re looking at this aggressively styled, dockable Android phone kitted to the max with specifications and features that would easily leave its target audience — some 2 million people that comprise the mobile-gaming community — impressed.

The phone itself has an Aura Sync-compatible RGB lighting system at the glass back where two cameras consisting of 12- and 8-megapixel sensors and an oddly shaped fingerprint reader are also located. The front of the phone is a bit more exciting, sporting 6 inches of AMOLED with a 10,000:1 contrast ratio and support for HDR through a dedicated image processor. For selfies, the 8-megapixel camera should suffice.

More importantly for gamers, the display boasts a 90Hz refresh rate — the highest of any AMOLED-touting phone on the market — and a super-fast response time of up to 1ms. The result, according to ASUS, is a crisper, more fluid visual experience than what the 120Hz Razer Phone can provide.

Adding to its gaming-focused feature set, the ASUS ROG Phone incorporates an advanced vibration motor for immersive haptic feedback that puts users in the game. The right side of the phone also has built-in sensors that allow the user to launch virtual joysticks on the edges of the screen, which can then be mapped to specific in-game actions such as movement and aiming.

ASUS is hoping that developers will be eager to integrate the feature in their games. For now, expect it to work flawlessly on Free Fire and Asphalt 8, two titles featured heavily during the company’s presentation. 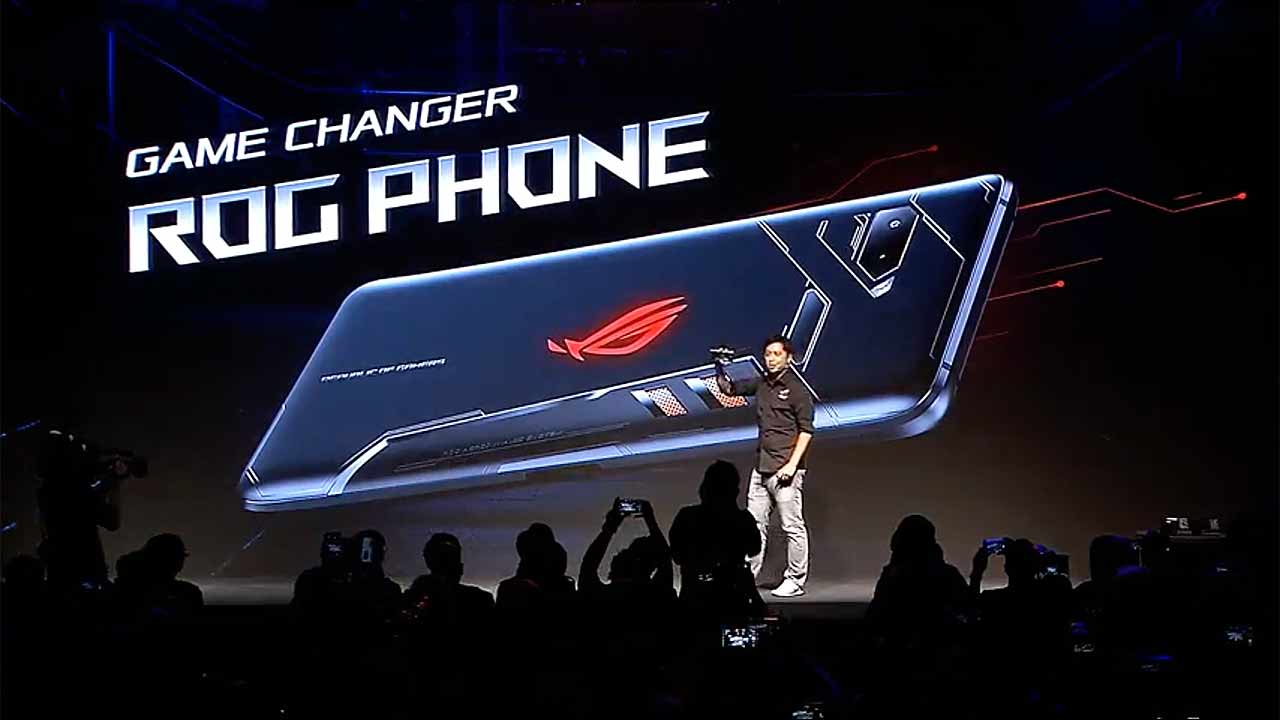 On the software front, there’s X Mode, which activates after squeezing the sides of the phone a la the HTC U11 and U12+ models. It prioritizes gaming experiences by shifting system and network resources, shutting down background processes and preventing notifications from popping up on the screen and distracting the user.

Powering the ASUS ROG Phone is a custom Qualcomm Snapdragon 845 chipset, coupled with 8GB RAM as standard and a whopping 512GB — yes, 512GB! — storage. There’s no SD card slot, so users can’t expand the storage. But then again, it’s unlikely anyone will ever truly miss having expandable memory on a phone that already has so much of it.

The Snapdragon 845 inside, according to Qualcomm, is additionally able to run at a higher clock rate — up to 2.96GHz compared to a regular 845’s 2.8GHz top speed — and is said to have been engineered for faster speeds on supported Wi-Fi and mobile networks. 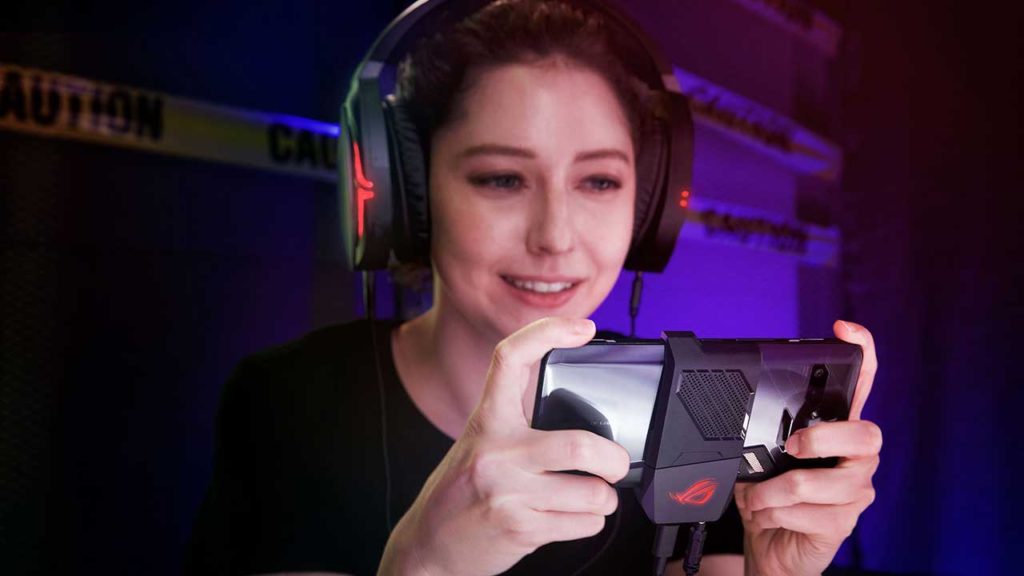 The AeroActive Cooler is an optional auxiliary fan that snaps onto the ASUS ROG Phone’s case and is included in the box.

Speaking of the processor, cooling it is the world’s first 3D vapor-chamber cooling design in a phone, in addition to the optional auxiliary fan that snaps onto the case and is included in the box. Using the accessory can lead to a 5x increase in sustained performance, based on tests done by the manufacturer.

The battery is rated at 4,000mAh, which ASUS claims is good for up to 7 hours of continuous gaming or 11.5 hours of video playback over Wi-Fi. ASUS’ proprietary HyperCharge technology is onboard, topping up around 60 percent of the battery capacity after 30 minutes of charging with the included adapter.

In keeping with its gaming shtick, several accessories will be available for the ASUS ROG Phone at launch, including a TwinView Dock that transforms the device into a handheld console with dual touchscreens. The dock houses its own 6,000mAh battery pack for extended use. There’s also the Mobile Desktop Dock that connects to a TV or monitor for some desktop-style gaming and a Gamevice controller that can stream to a television over the WiGig standard. 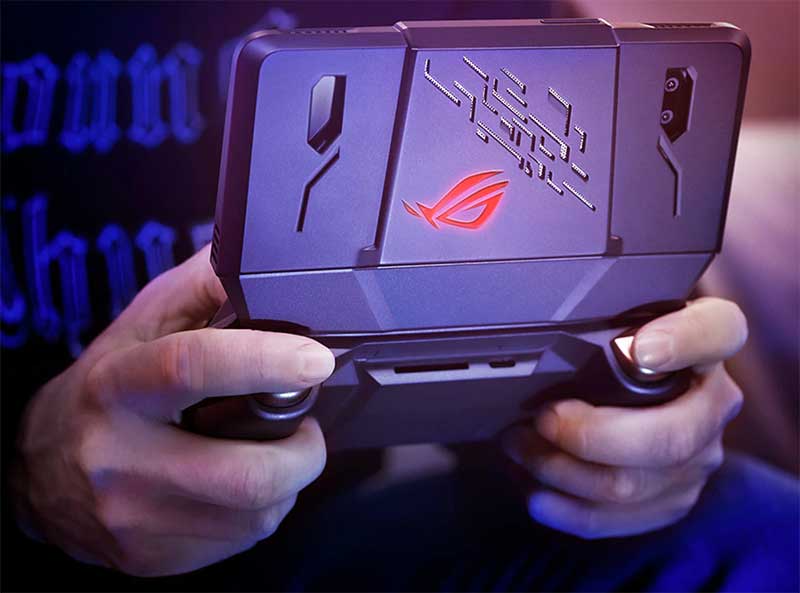 The TwinView Dock accessory transforms the ASUS ROG Phone into a handheld console with dual touchscreens. 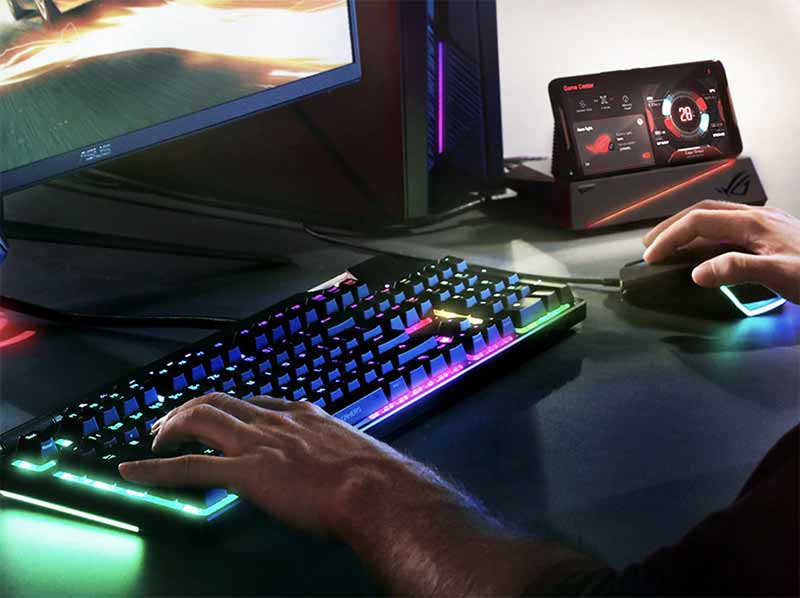 The Mobile Desktop Dock accessory connects the ASUS ROG Phone to a TV or monitor for some desktop-style gaming. 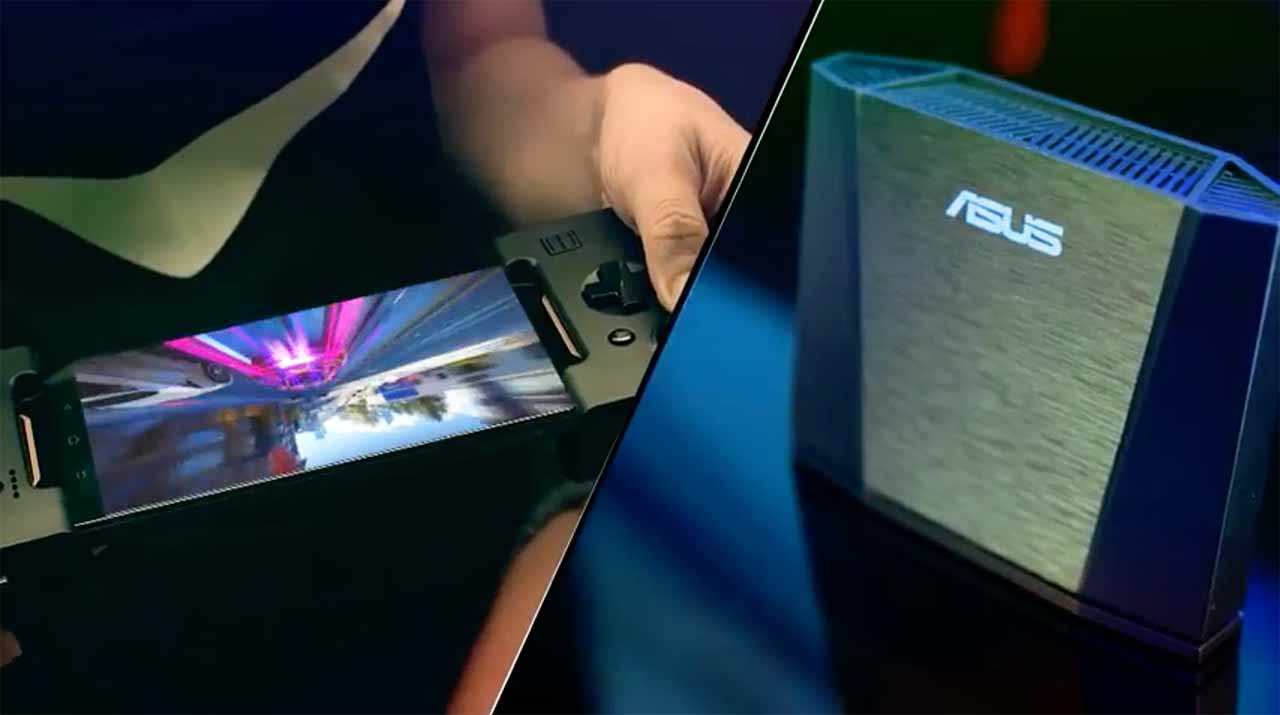 The Gamevice controller accessory allows the ASUS ROG Phone to stream to a television over the WiGig standard.

The ASUS ROG Phone will be available sometime in the third quarter of 2018 at a price to be determined later, perhaps at some point closer to the release date. We’ll keep our ears peeled and let you know when we hear more.