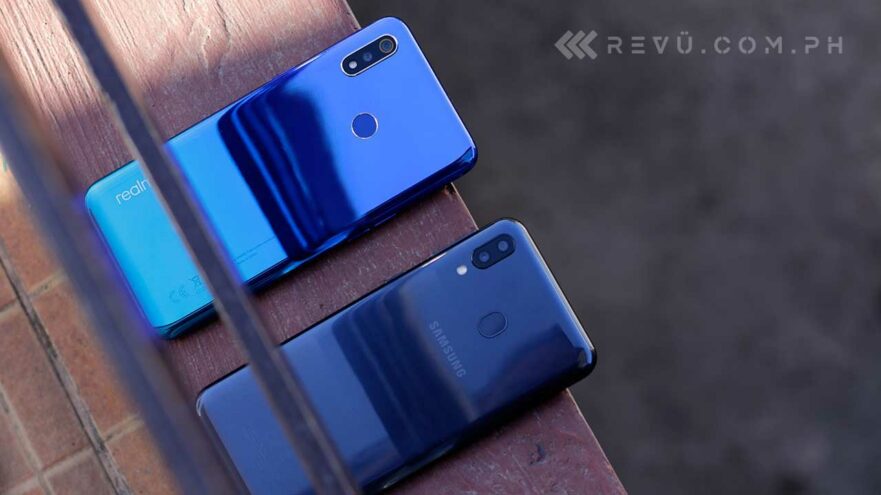 The Realme 3 and Samsung Galaxy M20 are two of the most popular budget smartphones today, promising real value for money with their specs and features. Both come in at around the P10,000 (around $192) mark, which is reasonable.

SEE ALSO: Realme 3 review: A real gem of a smartphone

Both are already available for purchase online, though the Realme 3 will also hit retailers nationwide beginning April 6. It’s unclear if the Galaxy M20 is going to be offered in physical stores, but we won’t be surprised if it eventually finds its way into offline sales. The competition in this segment is tough.

Our job today is to see how the Realme 3 stacks up against the Samsung Galaxy M20. There’s a full specs match-up at the end, but we’re also going to analyze and compare these phones on a per-spec basis. So, which budget blower wins in this category and has the most to offer? Read on to find out.

Both the Realme 3 and Samsung Galaxy M20 feature glossy plastic designs that are quite slippery as they are smooth and shiny. That’s not to say they look alike, though; the Realme looks flashy, even flashier in person, while Samsung’s bargain Galaxy, regardless of which color has been chosen, is subdued and understated by comparison.

It’s a contrast to Realme’s approach, which uses a design style that combines different colors to achieve a more attractive look — one that stands out and merits a double take. Our unit, a Realme 3 in Radiant Blue, smoothly transitions from blue to green or purple depending on the light and viewing angle. The Dynamic Black version is mostly black, but is tinged dark purple at the base.

But on the flip side, its high-gloss finish also makes the Realme 3 less resistant to fingerprints and stains compared to the Samsung Galaxy M20. It’s something to consider, but it’s not a big deal, especially if you plan on using a case. Realme supplies one in the box, and Samsung Philippines bundles a case with the Galaxy M20 as well.

The Realme 3’s overall build quality feels solid and has a reassuring heft to it. There are no creaks or misaligned ports and buttons like we sometimes see on budget-priced Android devices, and neither does the hardware feel too cheap or plasticky anywhere.

Both handsets can be used comfortably with one hand, although the Realme 3 is slightly taller and wider, whereas the Galaxy M20 is thicker and heavier because of its higher battery capacity. But between the two, it’s the former that actually feels better in the hand despite being physically larger than the Samsung. The curvature at the back helps with the grip, without intruding on the unibody designs the phones employ.

Around the back is where the fingerprint reader lies for both devices. The fingerprint unlock is easy to set up, and the sensors work well enough most of the time. Facial recognition is also an option on both, but in situations where lighting isn’t optimal, or the scene is backlit, you’re likely better off using your finger to unlock the screen.

A couple of other things to note: Realme’s single bottom-firing loudspeaker is satisfyingly loud; the Galaxy M20’s speaker isn’t as powerful or rounded, but it isn’t terrible as speakers go either. There’s no USB-C port seated at the bottom of the Realme 3, though. Samsung, meanwhile, decided to use USB Type-C as the main connection type instead of sticking to traditional microUSB charging.

Moving to the front, the Realme 3 arrives with a 6.22-inch IPS-LCD display. It’s only marginally smaller compared to the Samsung Galaxy M20’s 6.3-inch PLS-TFT, which is rare to see these days.

Both devices offer good picture quality in general, albeit for different reasons. Colors on the Realme handset look richer than they do on the Samsung, and the difference in clarity is hardly noticeable at all in daily use. The Galaxy M20 has wider viewing angles, but the Realme 3 produces a consistent picture, too, even when the panel is viewed at an awkward angle.

Both screens are bright enough to be comfortably used outdoors at peak brightness. We did notice, however, that the TFT finish of the Samsung limits reflectivity, making it look brighter in broad daylight. Bottom line: It’s incredible how close these phones are in the display department, and they actually perform better than their price tags would suggest.

The Realme 3 and Samsung Galaxy M20 both have dual cameras on the rear, consisting of a primary sensor with 13 megapixels for regular photos. Their secondary cameras serve different functions, however, with Realme opting for a depth sensor that helps the main camera take better portraits, while the Samsung phone packs a 5-megapixel wide-angle snapper for fitting more scenery and people in the frame.

Note that the Galaxy M20’s wide camera doesn’t have auto-focus, so low-light shots aren’t great; it can’t be used for macro shots, too. Actually, the handset can’t compete with the Realme 3 in poor lighting, regardless of which camera is used to capture a photo.

It isn’t even close, to be honest. The Realme 3 stands out as the best budget camera phone out there for tricky lighting conditions. Particularly in low light, detail is abundant, colors are sometimes bold but still nicely saturated, and dynamic range is realistically spot on.

The Realme 3’s impressive Nightscape mode, which simulates a long exposure by taking a series of images and combining the details from each to produce one composite image, elevates the photo quality and lends to a point-and-shoot experience that will delight even the most novice of users. Having tried different night-shooting modes by other manufacturers, we can say with confidence that these images taken with a budget smartphone camera have blown our expectations out of the water.

Having tried night-shooting modes by other manufacturers, we can say with confidence that pictures taken with the Realme 3 budget phone have blown our expectations out of the water.

For snapping selfies, the Realme 3 features a 13-megapixel sensor behind f/2.0 glass. It’s decent option whether during the day, at night, indoors or outdoors. By comparison, Samsung’s Galaxy M20 sits an 8-megapixel camera above the display.

The 13-megapixel, f/2.0 front-facing camera on the Realme 3 snaps decent selfies in various scenarios, whereas the Galaxy M20, on the other hand, has an 8-megapixel cam above the display. More megapixels usually mean sharper details, and that’s exactly what we see here. But although the Realme clearly has the upper hand in detail rendering, the M20 will give you a more saturated look in your pictures that you might prefer for whatever reason.

Internally, the Galaxy M20 is powered by Samsung’s own 14nm Exynos 7904, mated to eight cores, at least 3GB RAM, and a Mali-G71 MP2 GPU. Meanwhile, the local variant of the Realme 3 arrives with a 12nm MediaTek Helio P60 processor and Mali-G72 MP3 graphics, which, as you may have guessed, is the follow-up to the Mali-G71.

Oh, and also the Helio P60 is the same chipset used in the OPPO F9 and many other more expensive smartphones. In our testing so far, it runs really well — as good, if not better, than the Exynos 7904 and Qualcomm Snapdragon 660, and every other chip at this price segment, actually. That Realme has opted for last year’s flagship MediaTek chipset without sacrificing the rest of the hardware is genius.

The Exynos 7904 inside the Galaxy M20 still offers enough computing power for most smartphone tasks, but it isn’t built to give you smooth visuals at high settings in games like PUBG Mobile and NBA 2K19 that put more strain on a phone’s resources.

Most games will run fine, though, and the ones that don’t often require high-end specs to work as intended. One such game is PUBG Mobile. Running the game at medium detail, the M20 felt like it wouldn’t be able to handle higher loads, even if the settings allowed it. If you happen to play Mobile Legends: Bang Bang, you won’t be getting High Frame Rate in the display options.

The Realme 3 will push anything you put in front of it at a reasonably good pace, whether it’s a hardware-intensive app or a game that needs a lot of graphical power.

The Realme 3 will push anything you put in front of it at a reasonably good pace, whether it’s a hardware-intensive app or a game that needs a lot of graphical power, regardless of RAM and storage configuration. Both PUBG and Mobile Legends support high-frame-rate gameplay on the handset.

Although your mileage will likely vary, the Realme 3 and Samsung Galaxy M20 have adequate batteries for all-day usage. Realme has opted for a 4,230mAh capacity, while the M20 carries a bigger 5,000mAh non-removable cell. Fast charging is supported on these two models.

Battery life is superb on both, thanks to a combination of modest screen sizes, resolutions, and efficient chipsets, allowing us to use them for more than a day on a single charge. In PCMark’s battery benchmark, it took 11 hours and 12 minutes to run the Realme 3 down from full capacity to 20 percent. Perhaps surprisingly, the Galaxy M20 fared just a bit better and ran for 11 hours and 34 minutes.

The Realme 3 and Samsung Galaxy M20 are two of the best budget-priced phones in the Philippines right now. While the latter is a surprisingly well-rounded phone with a massive battery and an extra-wide secondary camera that’s a rarity in this segment, the Realme 3 represents better value for money, at a lower price point even.

It comes close to what Samsung offers in the display and battery departments, while also packing a much better processor in the MediaTek Helio P60 to do serious work and heavy gaming. The Realme 3 has an excellent low-light camera as well, and its dedicated night-shooting mode delivers some of the best results we’ve seen from a smartphone camera.

Simply, the Realme 3 shines where the competition falters. We can’t say the same about the Samsung Galaxy M20. The Realme wins this comparison because it combines the things that may matter most to budget-phone buyers.