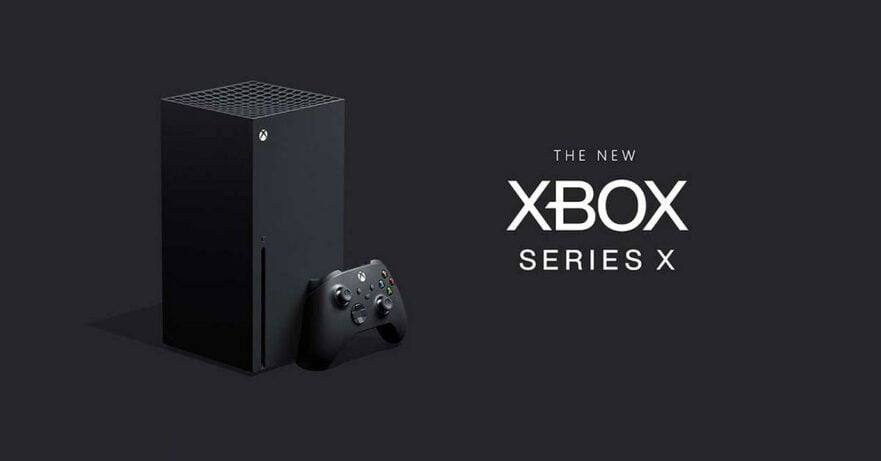 Seven years after the launch of the first Xbox One, Microsoft gave the public the first official sneak peek at the next-generation console, the Xbox Series X, at The Game Awards. Previously known by its codename Scarlett, we learn about what we can expect from the upcoming console and the lack of pricing. We won’t keep you waiting any longer; let’s dive in.

Microsoft has a specific target in mind with the Xbox Series X: Build a simple, easy-to-use, powerful gaming PC that can be used in the living room. The existing Xbox One UI isn’t the most intuitive one, and that’s something the company hopes to change.

Outright it looks like PC desktop tower, but one you can lay down horizontally like its predecessors. But it isn’t that big. When it’s standing tall as a tower, it’s just as wide as an Xbox One controller and as tall as three controllers stacked on top of each other. And because it’s a square tower, it is as deep as it is wide.

Similar to the Xbox One, most of the ports are on the back of the Xbox Series’ tower. The front is mostly bare, except for the Xbox button, the disc drive, and the eject button.

Xbox head Phil Spencer told gaming website GameSpot during an exclusive sneak peek at the Xbox Series X, “We wanted to design a console where the form was driven by the function. And the function — as I said — was to really play the highest power, most immersive games possible.”

You won’t be able to easily tuck away the console because of its form factor. But it’s not all brawn without brains.

Spencer claimed the Xbox Series X’s GPU is eight times faster than the base Xbox One, making it twice as fast as the Xbox One X and putting it at around 12 teraflops of graphical performance. That alone puts it up there with some of the quicker PC GPUs on the market today.

The CPU is expected to be stronger than what’s been seen in consoles before. Spencer boasted the Xbox Series X is four times more capable than previous consoles, but he didn’t name which ones.

The Xbox Series X will feature an NVMe SSD and use super-fast GDDR6 memory for RAM, which should effectively make this console quicker when it comes to downloading, loading, and updating games as well as make streaming games an easier affair. And while the Xbox One can already instantly pick things up where you left off in games, the Xbox Series X hopes to do this task better and quicker.

Microsoft also promised it wouldn’t be a noisy machine. At the very least, the Xbox Series X will run as silently as the Xbox One X while being able to cool itself with one fan and additional heatsinks.

The console will also be backward-compatible with games that work on all previous-generation Xbox One units. Microsoft hasn’t clarified if the Xbox Series X will work with the original Xbox and Xbox 360 games, but we assume that those that are backward-compatible with the Xbox One might work with the Xbox Series X. As for whether Microsoft adds compatibility to other Xbox and Xbox 360 games is another conversation.

What hasn’t changed much are the controllers. It is almost identical to the Xbox One’s. But the difference is the new console’s controller gets a Share button in the middle of the controller and below the power button, making it easier to take screenshots and capture shareable videos. It also has a modular hybrid d-pad for quicker diagonal inputs. The Xbox Series controller is also a bit smaller, with the back curved differently.

Microsoft hasn’t shared any console-exclusive games yet, but some of the games we are expecting to come to the Xbox Series X include Halo Infinite and Senua’s Saga: Hellblade II.

The console will continue to support Xbox Game Pass, which is the company’s game-subscription service, as well as the company’s cloud-based gaming service, Project xCloud.

One of the games we are expecting to come to the Xbox Series X is Senua’s Saga: Hellblade II

So, how much will the Xbox Series X be?

With the Sony PlayStation 5’s suggested retail price still unknown, Microsoft isn’t ready to share the Xbox Series X’s pricing yet. It hasn’t even made the console available for preorder. The company is keen on sharing with its customers what the product can do for them before giving them an SRP. And at the moment, what Microsoft is willing to talk about is how it is approaching pricing the console.

Spencer acknowledged that the company learned the hard lesson of bringing to market an expensive machine that is less powerful than what the competition offers. And it doesn’t want to make that mistake again.

“I would say a learning from the Xbox One generation is we will not be out of position on power or price,” Spencer said. “If you remember the beginning of this generation, we were a hundred dollars more expensive, and, yes, we were less powerful. And we started Project Scarlett with this leadership team in place with a goal of having market success.”

Previous reports suggested that the higher-end Xbox Series X will cost $500 (around P25,308)

A report of leaked specs back in October suggested that the higher-end Xbox Series X will cost $500 (around P25,308). But we don’t know if Microsoft plans to release differently spec’d versions at launch.

However, Spencer has mentioned in the past about the Series X name, which “gives us the freedom to do other things with that name, so that we can create descriptors when we need to.” The statement suggesting there is room for multiple models. But that could be a long-term goal for the series and not an immediate one.

At the same time, though, it lends credence to rumors that Microsoft has two next-generation consoles in the works right now: the Xbox Series X and a cheaper, possibly all-digital version code-named Project Lockhart. Lockhart is rumored to offer lower-resolution experience with around four teraflops of graphical power. But again, that is all speculation at this point.

In June, Xbox head Phil Spencer acknowledged that different factors affect the decision of not announcing the then-unnamed Xbox Series X’s price yet, including the ongoing trade war between China and the U.S.

Another reason Microsoft hasn’t disclosed pricing yet is that the company hasn’t settled on it yet. Back in June, Spencer acknowledged that different factors affect this decision, including the ongoing trade war between China and United States President Donald Trump’s administration.

“As we’re watching how the cost of the components are coming in, and things like tariffs and other things, trying to figure out what that price is going to be next year,” he said. “We have a price point in mind; I think we’re going to hit that. But we want to make sure everything comes in right. We’ll get price out as soon as we can.”

On top of that, GameSpot suggests that Microsoft might be introducing an installment plan for its console, a subscription model that could be similar to smartphone payment plans.

The Xbox All Access program made a comeback in the U.S. this holiday season, allowing buyers to make monthly payments on a new Xbox One bundled with a Game Pass Ultimate. This bundle includes the subscription service and Xbox Live Gold.

Outside of what the company has revealed, everything is a rumor at this point. And we are, for now, without an expected price point for the next-gen Microsoft console.

The Xbox Series X is still scheduled for a holiday season 2020 release. That’s still many, many months ahead. For now, we wait with bated breath what’s coming next.