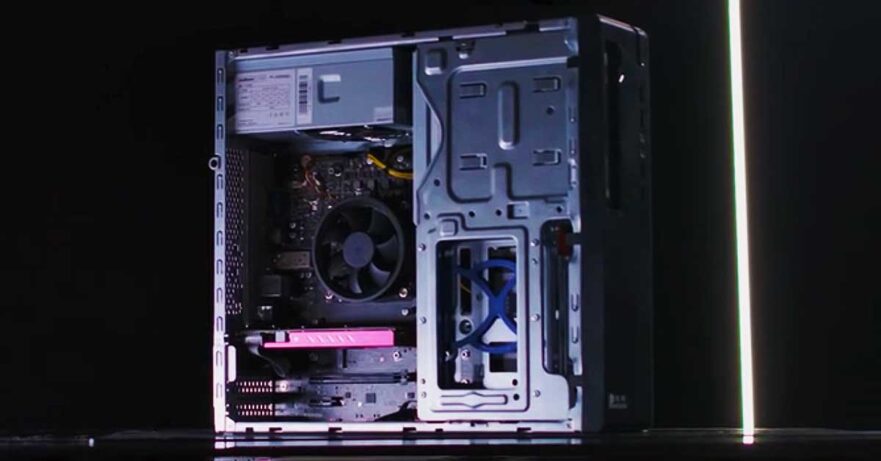 It was reported last month that Huawei‘s new consumer desktop PC was spotted on the 3DMark database with an AMD Ryzen 5 Pro 4400G APU, which combines the CPU and graphics chip in a single package, under the hood. It will be one of the first products powered by AMD’s new line of Ryzen 4000 series APUs that will launch tomorrow, July 21.

And now we know what the company’s first desktop PC will look like, thanks to some product shots as well as live images that were recently leaked online.

Based on the pictures, it looks like the Huawei desktop will have a simple and slim form factor with an optical disc drive, multiple USB-A ports, and a USB-C interface on the front. The rear panel boasts several USB-A ports, a VGA port, and an Ethernet connector for wired internet.

As for the Ryzen 5 Pro 4400G APU, multiple reports confirm the presence of six CPU cores and 12 threads, as well as an integrated Radeon RX Vega 7 GPU. Its frequencies vary between 3.7GHz and 4.3GHz. The APU has a reported power consumption of 65 watts.

Interestingly, a report came out earlier this month that Huawei will soon launch a desktop PC using its own Kunpeng 920 desktop board with a 7nm design and up to 8 ARM cores. It also supports six SATA 3.0 hard drive interfaces, two M.2 SSD slots, and up to 64GB of DDR4 memory. Its rumored price is ¥7,500 — or around P52,961 in Philippines pesos or $1,073 in U.S. dollars converted.

Huawei earlier said it will bring PC products to the market soon to complement its existing smartphones, tablets, laptops, and other ecosystem devices. The company is also expected to launch a gaming laptop as early as August. It is tipped to be powered by AMD’s latest notebook processors.