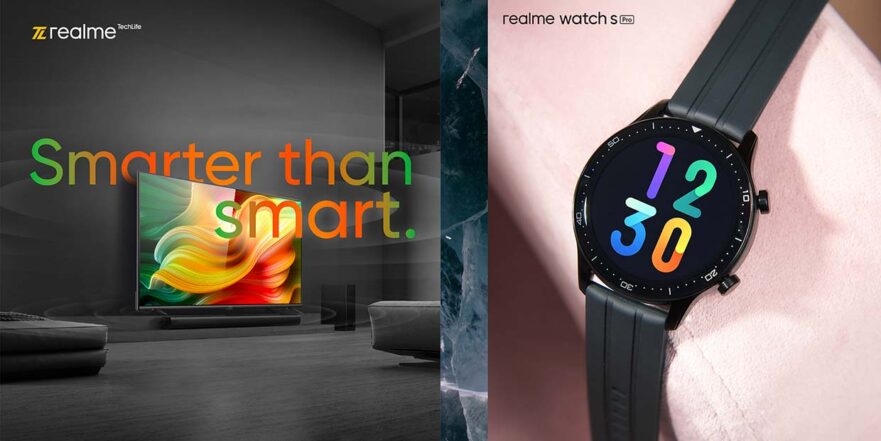 Realme Philippines will officially unveil the Realme Smart TV and Realme Watch S Pro March 2 during a livestream on its Facebook page and YouTube channel. For now, we don’t know how much Realme’s new products will cost, but we finally have a date when they will be first available and where you can purchase them online.

Both the Smart TV and Watch S Pro will be exclusively launched at Realme Philippines’ official brand store on Shopee during the latter’s 3.3 Mega Shopping Sale event. Only the 43-inch Realme TV has been listed on Shopee, but its cheaper 32-inch variant is mentioned on the store’s homepage. You can also win a Realme Soundbar, which hasn’t been announced for the local market (yet?) on the day of the sale.

The Realme Smart TV is powered by a quad-core MediaTek processor with 1GB RAM and 8GB of storage and runs Android TV, so it has access to the Google Play Store and native Android applications for streaming Netflix, YouTube, Amazon Prime, and more. Its remote actually includes shortcuts to the said apps. On top of Wi-Fi and Bluetooth, it also has Chromecast built in, allowing you to cast photos and videos on your Android device to the television. The Smart TV includes quad stereo speakers with Dolby Audio certification, rated for 24 watts in both its SKUs.

The panel uses LED lighting and, according to Realme, can achieve up to 400 nits of brightness with its own Chroma Boost Picture Engine, which uses advanced algorithms to improve overall picture quality. It also supports HDR 10 video, but only from built-in apps such as Netflix since the TV lacks the necessary HDMI 2.0 port to display HDR content.

Testing the Realme Smart TV. We also have the Realme Watch S Pro, so if you have any questions, hit us up!

The Realme Watch S Pro, on the other hand, is basically an upgraded Watch S with an AMOLED touchscreen instead of LCD and a proprietary software interface that doesn’t look any different from what is on the regular Watch S. However, the screen on the Pro version supports always-on display, has a resolution of 454 x 454, and can go up to 450 nits, making it easier to see notifications and alerts outdoors.

The battery inside is claimed to last up to 14 days, something we’ll put to the test in our review of the smartwatch. Other key features include a dual-core processor for smooth performance; dual-satellite GPS sensors for more accurate location data; 15 sports modes; blood-oxygen and heart-rate monitoring; and sleep tracking.