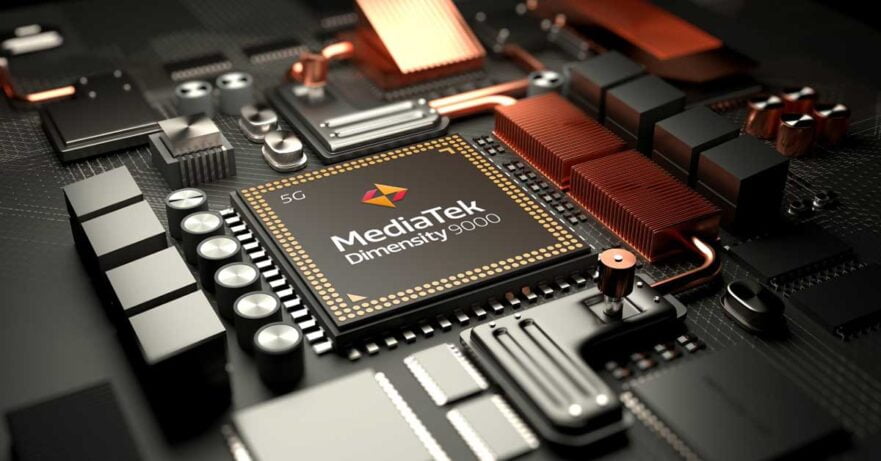 The world’s No. 1 mobile-chipset vendor is about to go toe to toe with rival Qualcomm at the top. MediaTek today announced its latest flagship chipset, which the Taiwanese company says is easily its most powerful SoC to date and can compete with the best chips currently on the market.

That last bit is important, because although the company’s top-end chipset right now, the Dimensity 1200, can trade blows with Qualcomm’s previous-gen Snapdragon 800 series processors, it simply isn’t up to par with the Snapdragon 888 and Snapdragon 888 Plus. With the newly launched MediaTek Dimensity 9000, though, the company hopes that it finally has the answer to Qualcomm’s top-tier chipsets.

As for the specifics, the Dimensity 9000 is the world’s first TSMC SoC fabbed on a 4nm process, which should improve both the processor’s raw performance and power efficiency. Like its predecessor, the Dimensity 9000 remains an octa-core affair, opting for a 1+3+4 setup with a single Cortex-X2 performance core operating at up to 3.05GHz, three Cortex-A710 cores clocked at up to 2.85GHz, and four Cortex-A510 efficiency cores clocked at 1.8GHz for less intensive tasks.

As expected, MediaTek’s newest flagship chip supports LPDDR5x RAM (up to 7,500 Mbps) and will bring Bluetooth 5.3 to mobile devices for the first time. Additionally, the Dimensity 9000 has a 14MB cache, or double the cache of the previous generation. MediaTek claims that expanding the available cache will improve performance by 7% and bandwidth consumption by 25%. For connectivity, there’s sub-6GHz 5G support, as well as Wi-Fi 6E.

Preliminary Geekbench tests suggest the Dimensity 9000 can produce higher benchmark scores versus those of the “Android flagship,” likely the Snapdragon 888, and scores similarly to the “2021 flagship” — a reference perhaps to the Snapdragon 888 Plus or Apple’s A15 Bionic in the iPhone 13 series. In the Antutu Benchmark, the Dimensity 9000 is said to score over 1 million points, confirming previous rumors that the next MediaTek flagship would break benchmark records set by past Android devices.

For a flagship-grade gaming experience, the Dimensity 9000 also has a new Mali-G710 GPU with 10 cores. It likewise supports raytracing, allowing for better graphics as well as closer-to-console experiences. Previous reports have indicated that Vivo could be one of the first manufacturers that launches a phone built around MediaTek’s new SoC.

The first smartphones powered by the MediaTek Dimensity 9000 will be arriving in late Q1 of 2022 globally.