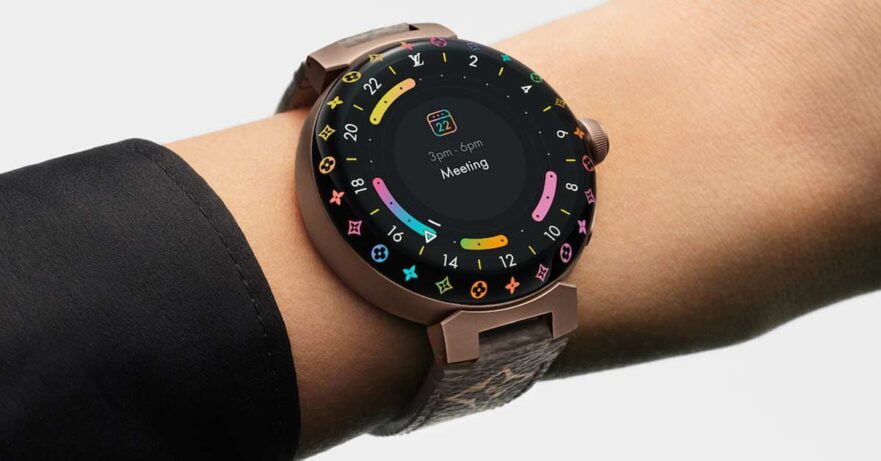 Talk about coincidence. We were checking out vintage watches online when we received Louis Vuitton’s email announcing the availability of its new smartwatch.

The Louis Vuitton Tambour Horizon Light Up Connected Watch has dropped at several stores worldwide, bringing with it the traditional profile of the original Tambour watch, which debuted in 2002 — but is now more high tech than ever.

There are 24 LED lights that adorn the edge of the luxury brand’s third-generation smartwatch, adjacent to the infinity-style sapphire-glass screen, and they light up the signature Louis Vuitton Monogram ring when the device is activated or when you receive notifications. How playful. Now, you get where the name comes from.

You can customize the Tambour Horizon Light Up Connected Watch all you want, starting with the eight built-in dial configurations available at launch, with more to be released in the coming months. One of them features Louis Vuitton mascot Vivienne. Of course, there’s the LV Canvas, too, paying tribute to the brand’s iconic Monogram and Damier prints. You can configure the colors — including 11 new gradients — and even add your own initials, with your choice of shade and typeface. Connect the watch to the LV Connect app to further personalize the wearable.

The Louis Vuitton Tambour Horizon Light Up Connected Watch runs a custom-designed operating system that’s not fixated on fitness and data, but instead focused on the Maison’s values: luxury, spirit of travel, and creativity. Swiping left, for example, gets you to My Travel for your travel plans, boarding passes, and the like, or for Louis Vuitton’s curated city guides. It’s made for Apple‘s iPhone, but also compatible with Google’s Android and Huawei‘s HarmonyOS.

Art meets technology. At the heart of the Tambour Horizon Light Up Connected Watch is a custom #LouisVuitton operating system that delivers a highly intuitive experience across a sapphire glass digital display. Learn more at https://t.co/0Gq8EHscHo#LVConnected #LVWatches pic.twitter.com/3SBR3ePb5s

Based on a custom-designed OS