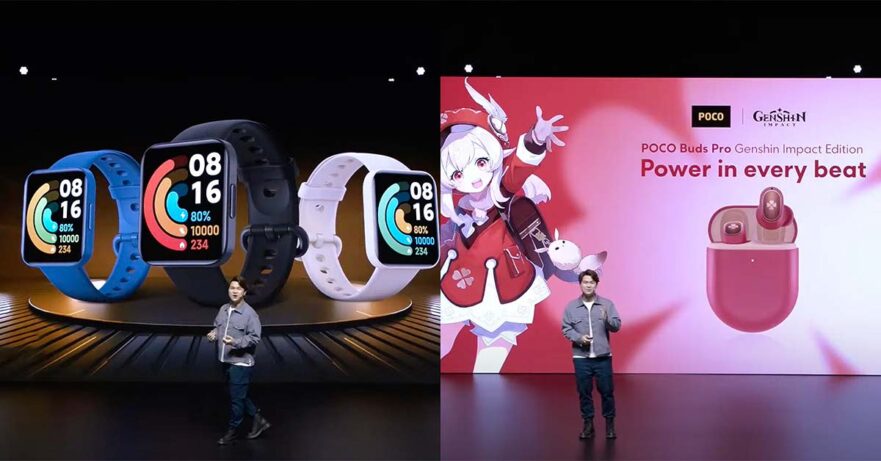 In addition to introducing the POCO F4 GT, which is essentially a rebranded Redmi K50 Gaming and starts at P27,590 (around $529) in the Philippines, POCO also recently launched its first smartwatch and the POCO Buds Pro Genshin Impact Edition.

The POCO Watch is the company’s initial smartwatch offering. It is priced at €79 ($84 or P4,393), but in the Philippines, the device costs P3,999 ($77). Locally, the Watch will be available from April 28 on POCO’s flagship Lazada and Shopee stores.

Design-wise, it looks like a rebadged Redmi Watch 2 from last year or Apple Watch, depending on who you ask. It has a familiar square dial sporting a 1.6-inch AMOLED touch display, flat edges, and physical buttons on the side. The screen also features fairly small bezels all around.

The POCO Watch comes with 5ATM water resistance and silicone straps in black, blue, and beige, plus over 100 customizable watch faces. In terms of health and fitness features, it’s equipped with over 100 workout modes like running, trekking, and cycling. You get heart-rate and blood-oxygen monitors as well, in addition to sleep tracking, period tracking, and stress management.

A 225mAh battery powers the Watch, and POCO says it will deliver a 14-day battery life on a single charge. There’s multi-system GPS and Bluetooth 5.0 connectivity, so the smartwatch should pair easily with Android and iOS devices.

Introducing #POCOWatch! It has up to 14 days of battery life, a 1.6" AMOLED touch display, and 100+ fitness modes! It is ready to #EmpowerYourFitnessEveryday

The POCO Buds Pro Genshin Impact Edition won’t officially launch in the Philippines, unfortunately, but it is something to keep an eye on, in case the company changes its mind sometime in the future.

It is POCO’s first collaboration product with a game IP, and it couldn’t have picked a better partner given Genshin Impact’s popularity among mobile gamers. The live-service action RPG has ranked as one of the highest-quality games on Android and iOS and has been consistently used as the gold standard for mobile-game visuals.

If you’re a fan of the game, this Buds Pro variant is pretty much a no-brainer, especially if you’re familiar with Klee, a five-star playable Pyro character in Genshin Impact. There’s plenty of fan service to be found here, including a Klee-themed retail box, a backpack carrying case, and voice notifications. The TWS earbuds and charging case also come in a nice red-and-gold colorway, styled after Klee’s in-game appearance.

Any chance that the POCO Buds Pro Genshin Impact Edition will be released in the Philippines, Xiaomi?