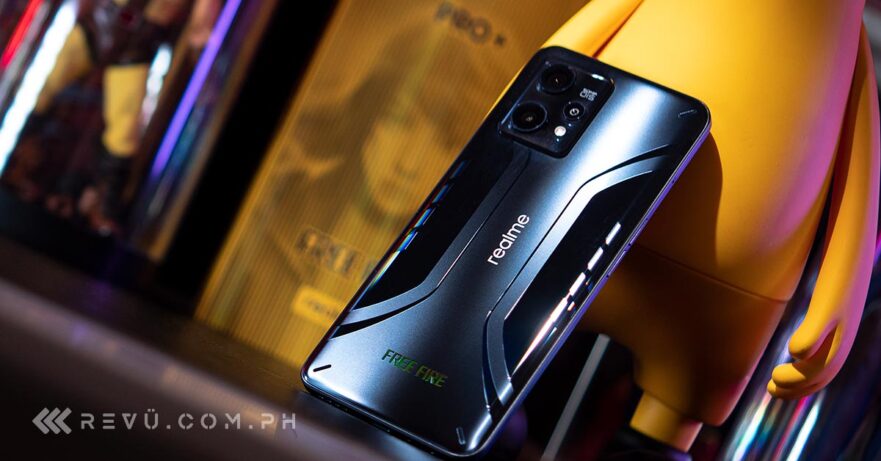 The Realme 9 Pro Plus Free Fire Limited Edition hits stores in the Philippines today, with the gaming-themed smartphone getting an introductory price of P18,990 (roughly $362) on Shopee from the 25th to the 26th and the Realme E-Store from April 25 to April 30.

It carries a suggested retail price of P20,990 ($401) for 8GB RAM and 128GB of storage at local retail, making it more affordable than the 8GB/256GB standard version by P3,000 ($57). Besides the extra memory, the Free Fire Limited Edition and regular Realme 9 Pro Plus share virtually the same specs, right down to the gaming-capable MediaTek Dimensity 920 5G chipset, AMOLED display with a 90Hz refresh rate, dual stereo speakers by Dolby Atmos, vapor-chamber cooling system, and 4,500mAh battery that supports fast charging up to 60 watts.

That being said, if you’re a fan of the battle-royale game and don’t need the additional flash storage, or if you simply prefer a more aggressively designed smartphone packed in an appropriately styled box, we encourage you to check out the Free Fire Limited Edition while it’s still available at a discounted price.

So, what’s inside the retail box of this special variant? Scroll down for our unboxing photos of this smartphone.

Above are photos of the retail packaging with the outer box cover still intact. Free Fire’s Bermuda map is printed inside the cover, so you may want to keep it in case you need it for reference.

Interestingly, this is the first time we’ve come across a Realme phone with a box cover, but we hope it won’t be the last.

You also get this black insert with a Free Fire card that lets you claim an in-game reward for your account.

The box itself has a black-and-yellow motif and features an in-game character as its box art. The holographic design on the front panel is a nice touch.

Inside the box, you’ll find the manuals, a warranty card, several game-related stickers, plus a SIM-eject tool styled like an in-game knife. They’re all neatly tucked in a yellow insert.

As for the stylized SIM ejector, it’s pretty sharp and has the word “booyah!” inscribed on one side. “Booyah” is actually the game’s battle cry, and, as such, it appears numerous times on the box and its contents.

The phone itself looks nice and low-key in its custom dark-blue colorway. The holographics accents on the side provide added flare and give the Realme 9 Pro Plus Free Fire Limited Edition a bold aesthetic that immediately catches the eye under the right light and angle.

The rest of the contents are exactly what you’d expect if you’re familiar with the standard release, with a clear silicone case, a USB-C cable, and a 65-watt SuperDart power brick rounding off the package. Unfortunately, the Realme 9 Pro Plus Free Fire Limited Edition, like the vanilla version, does not ship with its own set of earphones, although a headphone jack can be found at the bottom for private listening.

That’s it for our unboxing tour of the Realme 9 Pro Plus Free Fire Limited Edition. Again, besides the cosmetic changes, notable game-specific extras, and halved storage space compared with the standard 256GB model, the hardware remains largely the same. And it’s still perfectly capable of playing today’s most demanding games smoothly at medium settings.