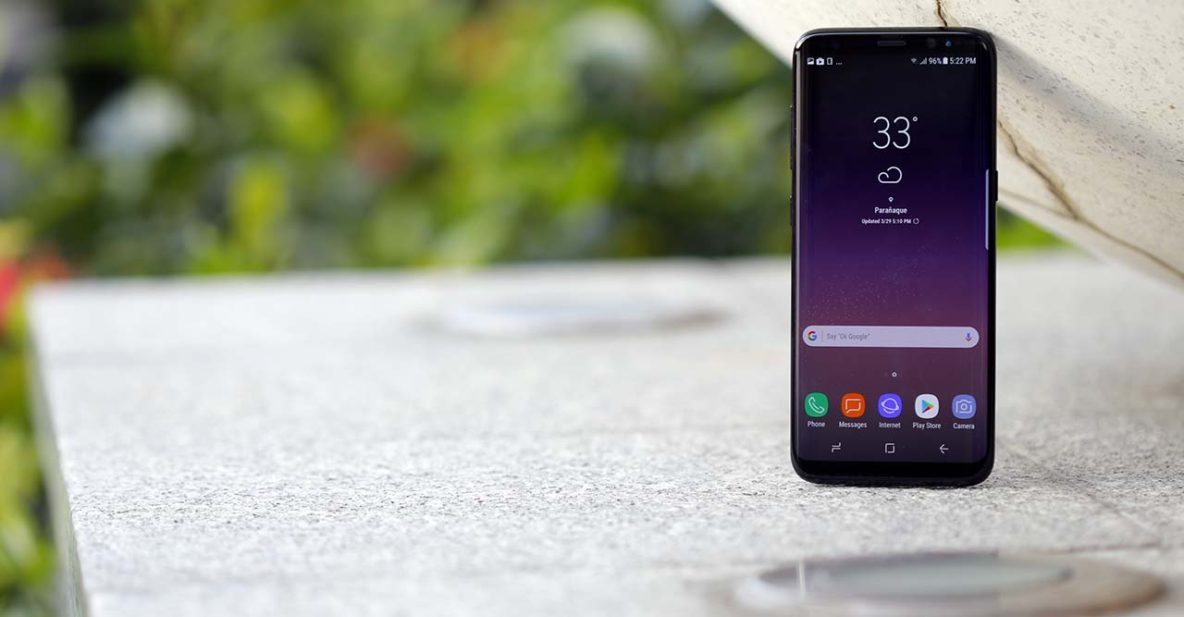 SAMSUNG has pushed the envelope of smartphone design and, to a lesser extent, technology with each flagship outing in recent years — though it may have done too much in too many areas last year, resulting in the cancellation of a promising big phone. Take one glance at the Galaxy Note 7 headlines, and you’d think there would be no more room for ambition, risk, and chutzpah within the walls of Samsung’s Seoul headquarters.

But you’d be wrong: The Samsung Galaxy S8 (click this for the smaller variant’s complete specs and this for the Galaxy S8+’s) is even crazier (in a good way!), more ambitious, more enviable than anything the company has produced so far. It breaks the mold for what a modern handset is allowed to be.

Samsung needs a smash hit in the upscale segment to snuff out the momentum behind the Huawei P10, the LG G6, and other flagships announced at this year’s MWC or Mobile World Congress, as well as throw a wrench into the new-iPhone hype machine. Based on our time with the latest Galaxy S entry, 8 could be Samsung’s magic number. 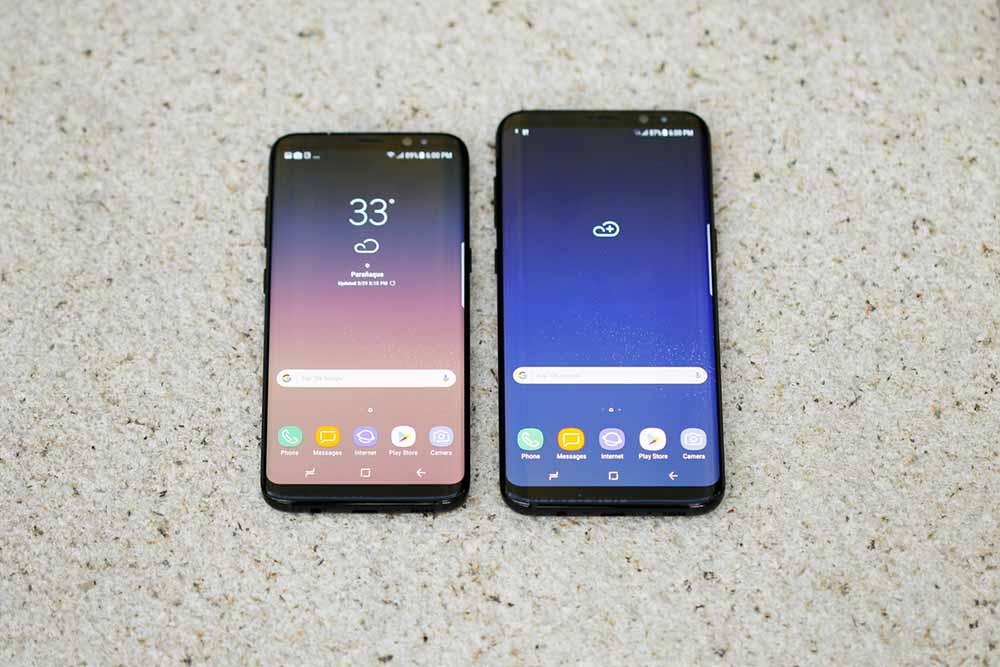 The Samsung Galaxy S8 is more ambitious than anything the company has produced so far. Here it is with the Galaxy S8+.

The Samsung Galaxy S8 and S8+ will go live for pre-order in the Philippines beginning April 17th. Unlocked pricing for the S8 and S8+ models with 64GB of expandable internal storage is set at P39,990 (roughly $797) and P45,990 (around $917), respectively. Color options available locally include black, gray, and gold.

A new and exciting Galaxy to explore

Here’s the thing about the S8’s design: It looks very much like a compact Galaxy Note 7. Which is to say we’re smitten with its aesthetics, especially with the two sheets of glass tapering towards the metal frame. And our not-so-big hands appreciate that we have no problems whatsoever using it with either hand. To think the Note 7 has a slightly smaller 5.7-inch display compared to 5.8 inches on the Galaxy S8 and 6.2 inches on the Galaxy S8+. 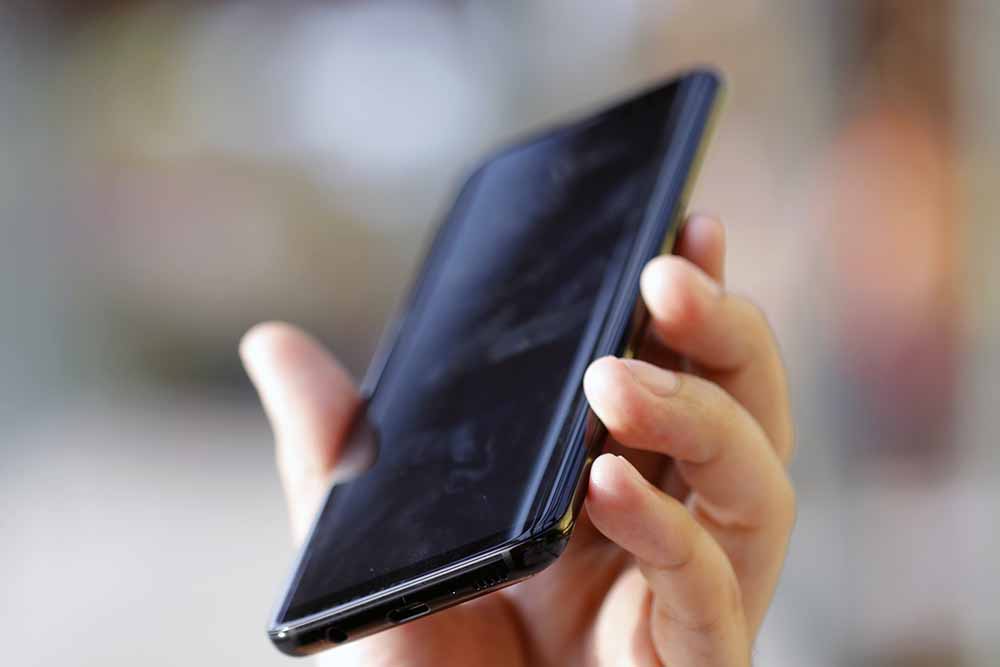 We’re smitten with the Samsung Galaxy S8’s aesthetics, especially with the two sheets of glass tapering towards the metal frame.

About either screen: It still runs at good ol’ quad-HD resolution, but has an unusual 18.5:9 aspect ratio, resulting in a taller screen than we’re accustomed to seeing. Apps — Chrome, YouTube, and Facebook, to name but three — don’t seem to mind the change, though, and so far, every app we’ve tried has worked just fine. As it is AMOLED, contrast and saturation levels are as good as anything in town; blacks can be very inky when needed; and colors are punchy and bright. 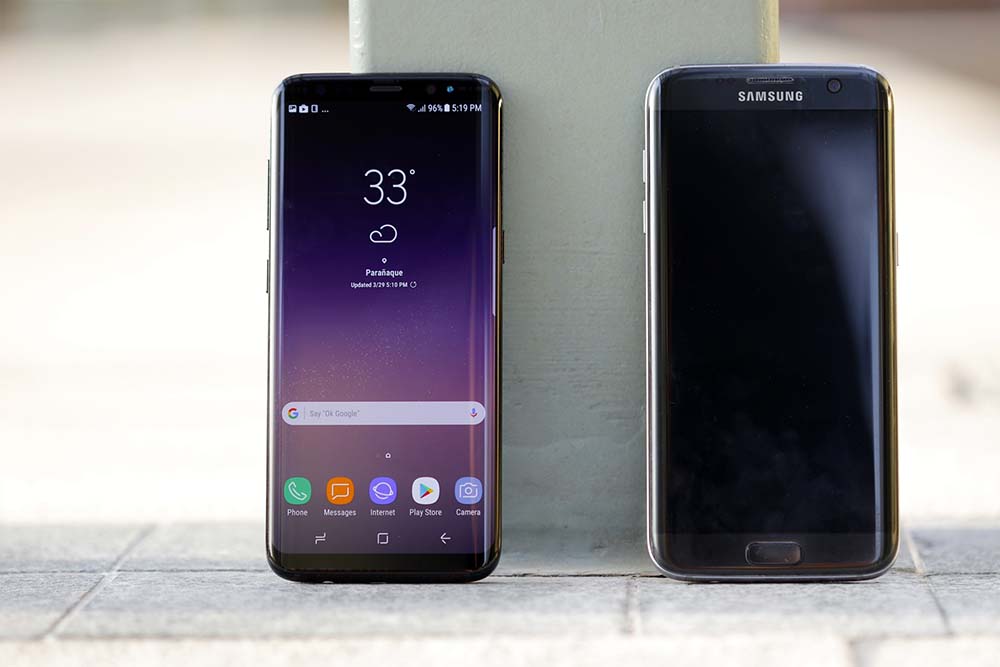 The Samsung Galaxy S8 has an unusual 18.5:9 aspect ratio, resulting in a taller screen than we’re accustomed to seeing. Here it is with the Galaxy S7 Edge.

The rear camera sits flush on the back this time around, right next to the fingerprint reader, which is an awkward spot to rest your index finger. The bottom edge features a headphone jack, which will be much-appreciated, and a USB Type-C port that supports fast charging and video output using the appropriate Samsung dock. The right side is home to a power button, while the left-side rail has a volume rocker and a button to quick-launch Bixby, Samsung’s new digital assistant. 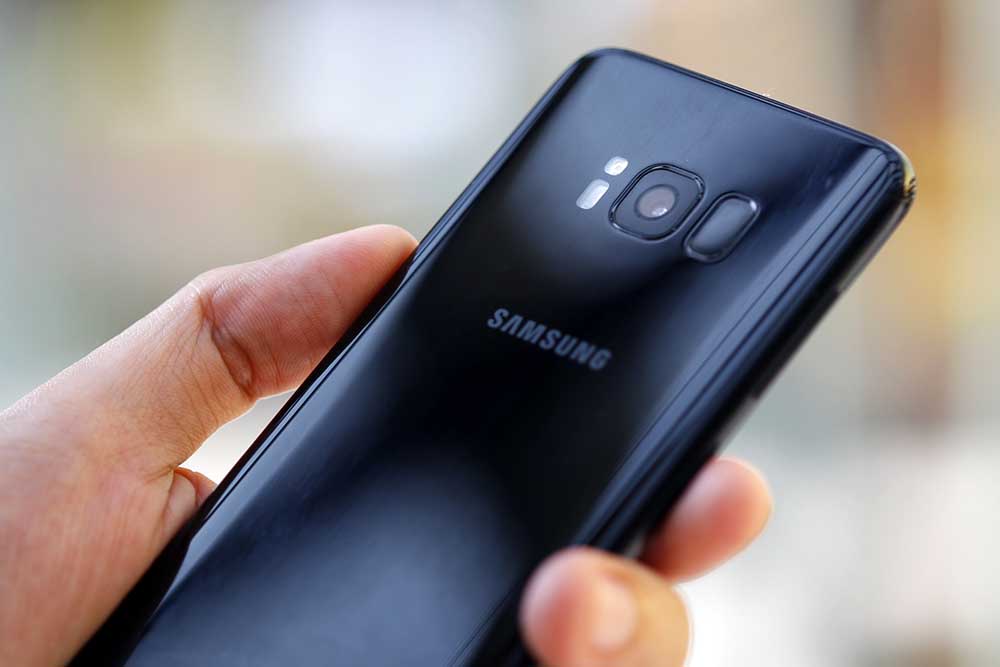 The rear camera sits flush on the back this time around, right next to the fingerprint reader.

More about Bixby: It’s got all sorts of smarts. It can identify popular landmarks, wines, text, among other stuff, and provide contextual information where available. It can even bring up a gallery of faces that resemble you based on Pinterest data. Bixby also allows for voice commands and natural speech recognition. 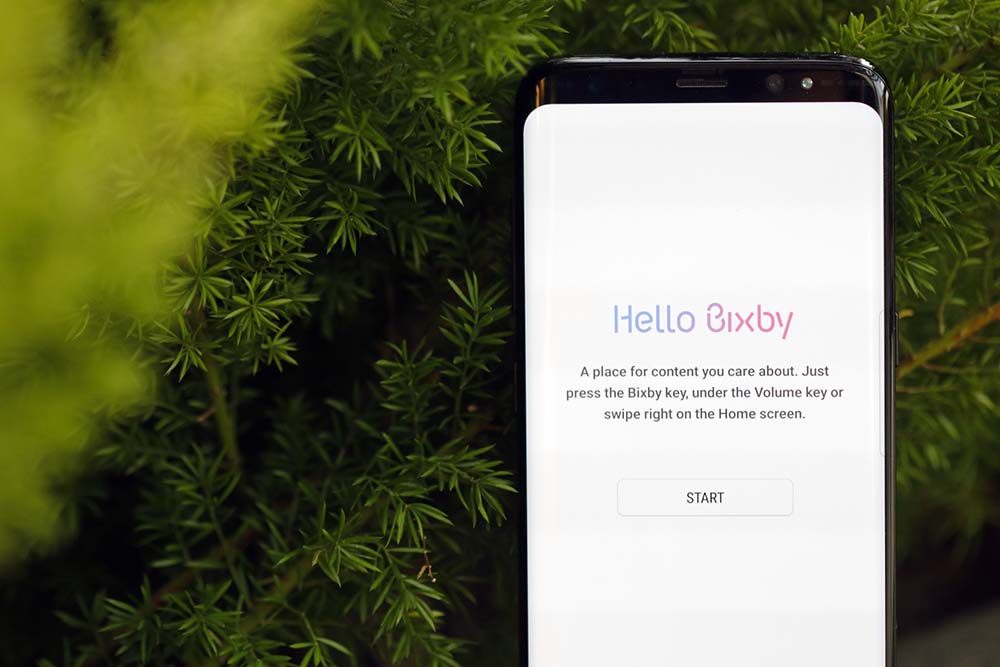 The iris scanner, meanwhile, works better than the one found on the Note 7, so much so that we found ourselves using it more than the fingerprint reader. The Samsung Galaxy S8 can also use facial recognition to detect your mug and unlock the device. It bears noting, though, that you can’t use both at the same time for pretty obvious reasons.

The Samsung Galaxy S8 can also use facial recognition to detect your mug and unlock the device.

On paper, it may seem like Samsung hasn’t moved the needle much in the camera department. The sensor round the back is still 12 megapixels, like the Galaxy S7’s, which might surprise some given that most other OEMs seem to agree that two rear-facing cameras are better than one.

They’re right in some sense; there are implementations that could prove useful, even to the average user. Just ask owners of the Apple iPhone 7 Plus and Huawei’s increasing roster of dual-cam handsets.

The good news is Samsung has more recently flexed its camera muscle against top-tier competition, with the Galaxy S7 still being regarded as one of the best shooters on the market. And the Galaxy S8 maintains the secret sauce that makes its predecessor great while improving on it. We’re talking having the same dual-pixel camera that performs well in low light and brilliantly in daylight and indoors where plenty of light, natural or otherwise, is available. 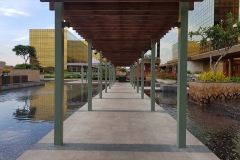 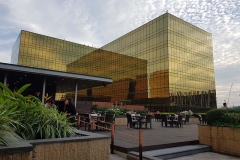 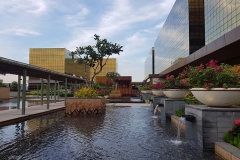 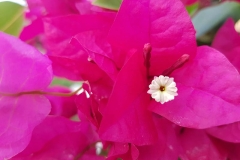 The selfie shooter has been rightfully bumped to 8 megapixels, from the Galaxy S7’s 5 megapixels, behind an f/1.7 aperture lens. It’s no selfie expert — and you can’t use it to fit a large group without the help of a selfie stick. But it does perform well enough in practice, and that’s all you can ask for from a front-facer. On the software side, the default camera app has its own set of stickers and filters to make your selfies look next-level cool or fun. 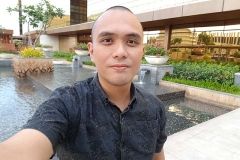 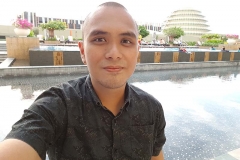 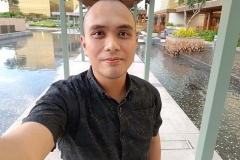 But enough talk. The proof is in the pudding, they say, so check out these images shot on the Galaxy S8’s rear and front cameras vis-a-vis those shot on the iPhone 7 Plus.

Much has been written about the Samsung Galaxy S8 being the first (and only at the moment) equipped with Qualcomm’s latest and greatest Snapdragon 835 system-on-a-chip. Perhaps even more has been published on the hows and whys that go with it.

The Philippine-bound version of the S8, however, won’t be seeing one under the bonnet; the local release will get an Exynos 8895 (Samsung’s latest and greatest) chipset instead, replete with 64GB of storage — or double that of last year’s edition — and 4GB of RAM.

The Philippine-bound version of the Samsung Galaxy S8 won’t be powered by Snapdragon 835. Instead, it will get an Exynos 8895 (Samsung’s latest and greatest) chipset.

Neither the choice of processor or memory configuration should be an issue, though. The 10-nanometer process used for the Exynos chipset promises greater efficiency, not to mention 4GB is plenty enough for multitasking.

Our unit had no trouble navigating Samsung’s Android Nougat-based custom interface, diving in and out of apps, playing video, gaming, or any other task we attempted with it. This thing is stupidly fast — faster than any Android we’ve tested, and it shows in the benchmark results. Our unit notched 165,635 points in Antutu Benchmark and 6,162 points in our Geekbench multi-core testing. 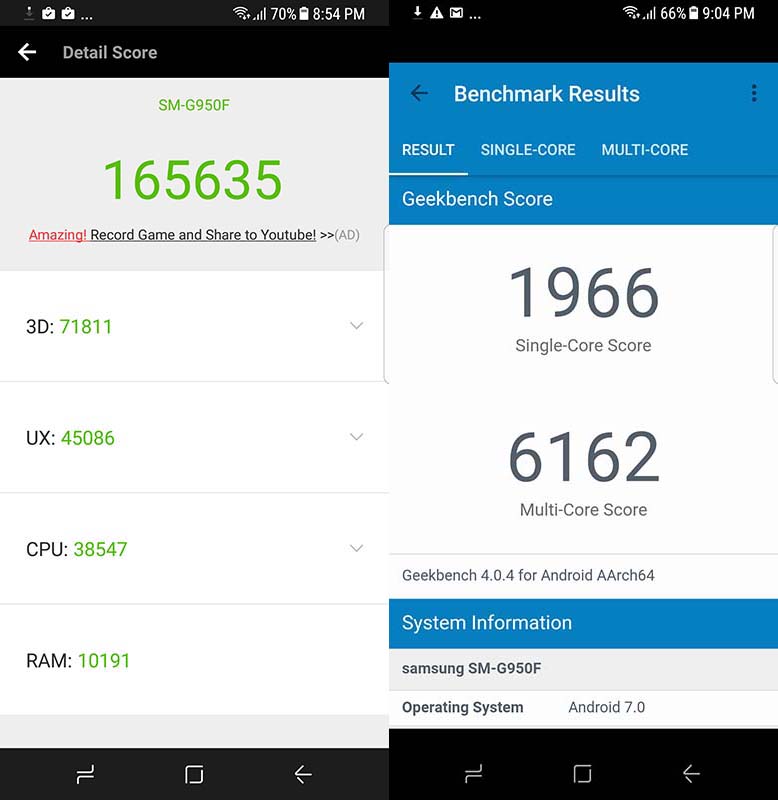 It’s tough to find fault with the Samsung Galaxy S8. Where other manufacturers are messing around with the formula by introducing cosmetic changes that will have little to no effect on user experience, Samsung’s newfound design sensibilities make a huge difference.

That the S8 managed to pack a 5.8-inch screen and a lot of technology into a mid-sized phone still blows us away. It does an awesome job balancing prettiness and substance without really compromising on comfort or usability. 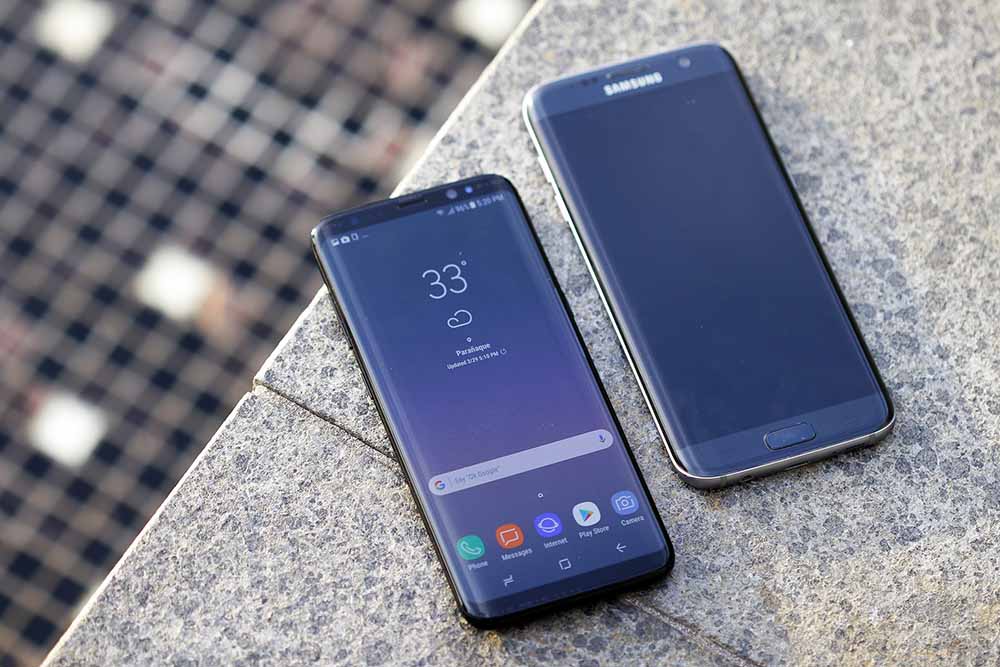 The Samsung Galaxy S8 does an awesome job balancing prettiness and substance without compromising on comfort or usability. Here it is with the Galaxy S8+.

More than offering tremendous gaming chops and a great camera that is more than serviceable in low light, Samsung went beyond the practice of putting together a rectangular piece of metal and glass that has the highest-quality components and build materials.

Bixby, its new voice assistant, can, under the right conditions, seriously compete with Siri, Cortana, and Google Assistant. Fast charging on the S8 should be faster than on any other Samsung device. And you can keep it perilously near the edge of the sink or shower without worrying about water damage. 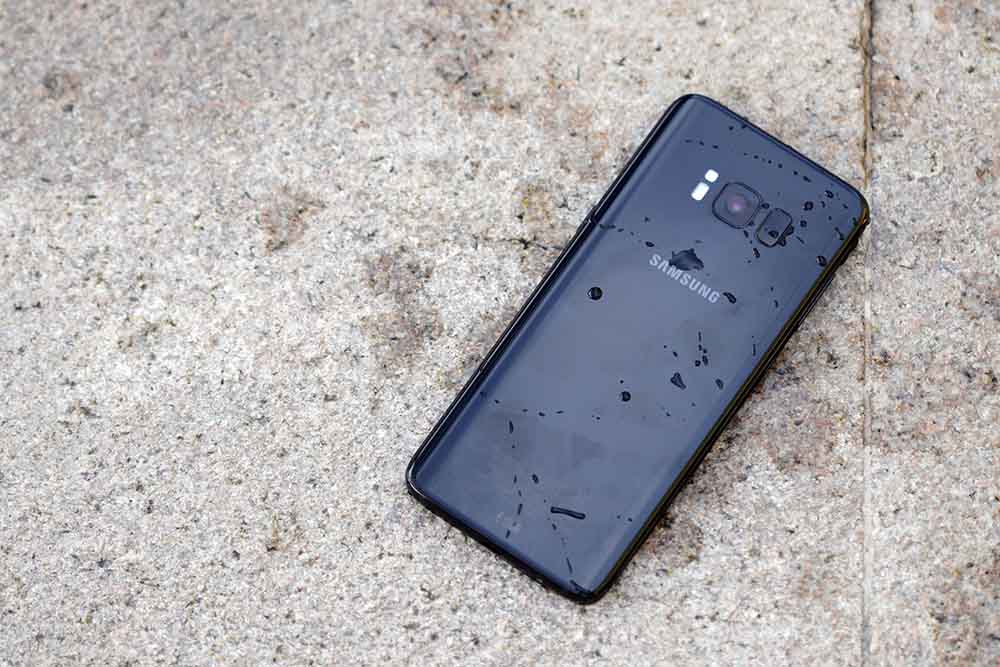 You can keep the Samsung Galaxy S8 perilously near the edge of the sink without worrying about water damage, thanks to its IP68 rating.

Suffice to say, if you’re in the market for a new, big but not too big Android phone, your search should begin with the Samsung Galaxy S8. It’s easily the most likable Android phone we’ve ever used, and likely the best money can buy (or pre-order?) today.

If you’re in the market for a new, big but not too big Android phone, your search should begin with the Samsung Galaxy S8.