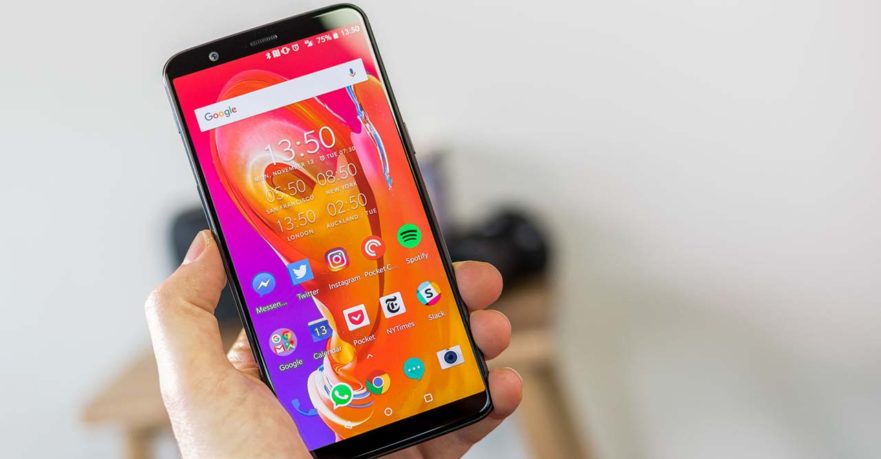 For the second straight year, OnePlus is offering a T version of its flagship smartphone. This time, we’re getting the OnePlus 5T just four months after the OnePlus 5 was launched.

But unlike in 2016 when the changes were seen in the internals, the modifications this year are mostly in the exterior, the most striking of which can be found up front. The OnePlus 5T now boasts a modern, on-point-in-2017 18:9 screen with a 1080 x 2160 resolution. The display may be bigger at 6 inches, yet that’s fitted into a body about the same size as the 5.5-inch OnePlus 5.

And we’re glad to know that the screen — an AMOLED one, by the way — is sourced from Samsung, clearly the king of smartphone displays.

So where did the fingerprint sensor go? It went to the back, right where the company’s logo used to be. The latter has been moved a bit lower. Besides the fingerprint reader, you can now unlock the phone using the face-unlock feature. It’s not on the same level as Apple’s Face ID technology on the iPhone X, of course, but it’s still a welcome addition.

The not-so-impressive telephoto secondary rear camera of the OnePlus 5 has been replaced by what the company says is a low-light 16-megapixel camera equipped with a large f/1.7 aperture. The main 20-megapixel cam remains unchanged.

The rest are basically the same: Qualcomm Snapdragon 835 processor paired with either 6GB of RAM and 64GB of storage or 8GB of RAM and 128GB of memory; 3,300mAh battery with support for OnePlus’ own Dash Charge fast-charging technology; and a headphone jack (hallelujah?). Still no waterproofing and wireless charging — features we think will come with next year’s flagship smartphone.

READ ALSO: Getting an Apple iPhone X on Day 1 isn’t for the faint-hearted

No word yet on when or if the OnePlus 5T is coming to the Philippines. We’ll let you know as soon as we get word from Digital Walker, the exclusive distributor of OnePlus phones in the country.