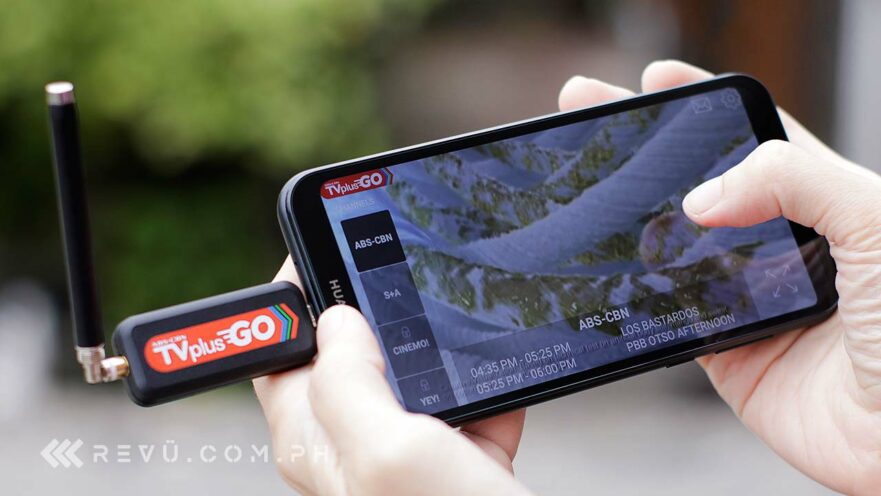 ABS-CBN announced TVplus Go last month, giving customers in the Philippines yet another option to catch their favorite local programming on their Android device.

TVplus Go comes in the form of a small dongle that directly attaches to a phone or tablet. It costs P799, or about $16 converted to United States dollars, and you’ll only need to pay for it once, then you can use it forever. There’s also the TVplus Go companion app, which you’ll need to open to use the dongle and watch channels live.

Let’s talk about how to set up and use the ABS-CBN TVplus Go dongle.

First, you’ll need to download the official ABS-CBN TVplus Go app on your Android smartphone or tablet, which must be running Android 5.0 or later on a dual-core processor or higher with at least 1GB RAM. Most Android phones sold today have no problem meeting those requirements.

You will find the app by searching “TVplus Go” on the Google Play Store. Connect the dongle to your device, which will launch the TVplus Go app. If it doesn’t start automatically, you can open it manually. Grant all the necessary permissions for the app to work and register the dongle with your device, in case you haven’t already, to access exclusive programming.

Make sure that you’re registering your own smartphone or tablet because you’ll need to pay P20 ($0.39) for every succeeding registration. Yes, you’ll pay extra for every phone or tablet after the first device registered with the dongle, on top of what you’ve already paid for it. You can skip the registration process — that’s an option, too — but doing so will prevent you from watching some channels available on TVplus Go, such as DZMM Teleradyo, CineMo, and Jeepney TV.

Make sure that you’re registering your own smartphone or tablet because you’ll need to pay P20 ($0.39) for every succeeding registration. Yes, you’ll pay extra for every phone or tablet after the first device registered with the dongle

After registration, you can start watching your favorite shows on local TV — although, again, you can still watch without completing the sign-up process. The exclusive ones ABS-CBN has thrown in — DZMM TeleRadyo and CineMo, among others — bring much-needed diversity to TVplus Go’s free-to-air offering.

Here’s the full list of available channels in our neighborhood as of today. The lineup will vary from one area to another, but most of the popular channels are available in Metro Manila and some parts of Luzon, Cebu, and Cagayan de Oro.

These channels are locked at the moment. But the fact that they’re already listed in the app suggests they might be offered under a subscription-based payment model sometime in the near future. We’ll see.

The ABS-CBN TVplus Go dongle itself is pocketable, weighs about the same as a standard USB stick with no antenna attached, and has a straightforward, minimalist design with matte finish on its plastic casing. It barely adds any weight to your phone.

With its antenna plugged into the base of a device and pointing out in one direction, the TVplus Go is just about an inch shy of the average smartphone length-wise. It’s a lot shorter when the antenna is folded up or down for better signal strength.

The microUSB end that connects to devices is a bit longer than what we’re used to. But that’s a good thing, as it means the dongle can probably be plugged into a phone or tablet with a protective case still on — no need to remove it. The TVplus Go doesn’t have a built-in battery; it has to be attached to a device at all times to work.

You can remove the antenna for easier storage, and ABS-CBN has included a cap with a string attached, so that you can loop the antenna around a case with a lanyard. It would have been better if the antenna used a magnetic attachment to hold the cap in place, or if the cap would simply snap onto the end of the dongle while connected to a device.

If you’re wondering if the ABS-CBN TVplus Go dongle will work on Android devices with a modern USB-C port, the short answer is yes. We plugged it into our Xiaomi Mi 9T with the help of an adapter, and it works just fine. Another thing to keep in mind is that TVplus Go isn’t compatible with rooted devices.

The ABS-CBN TVplus Go app UI is simple and easy enough to use, like it must be when it comes to a mass-market friendly app. It has two main elements on opposite sides of the screen.

The left-hand side shows the channel carousel where you can slide your finger up and down to select the channel you want to watch. The right side sees the Settings button on the upper corner and a toggle at the bottom, which lets you choose between a 4:3 and 16:9 aspect ratio, or you can have the picture cropped to cover most of the screen real estate available on your device.

The ABS-CBN TVplus Go app has two main elements on opposite sides of the screen. The left shows the channel carousel where you can slide your finger up and down to select the channel you want to watch. The right sees the Settings button on the upper corner and a toggle at the bottom

The app runs well, and we didn’t encounter any major problems during our testing. Some channels take longer to load than others, but that’s probably more of a signal issue than anything else. Actually, most concerns we have with the app boil down to signal quality. If it’s good, there’s practically nothing to worry about.

The signal quality in our neighborhood is generally good, allowing us to view all the channels on offer in every room of our home. Of course, you should expect your viewing experience to be impacted while in transit.

Does ABS-CBN TVplus Go drain the battery excessively when in use? No

Does TVplus Go drain the battery excessively when in use? No. Not that we’ve seen, anyway. But then again, we don’t spend a lot of time watching free-to-air shows on local TV. Also, no, you can’t record what you see on your device’s display while the app is running. None of the apps we tried worked; nothing we tried to record the screen on our device worked.

ABS-CBN TVplus Go definitely delivers what it says on the package. It allows you watch your favorite programs on local TV on the go and never have to worry about consuming data and hiking up your bills and mobile expenses.

You can spend P799 on this one-time purchase and view plenty of free-to-air TV channels, plus a few extras, live without a monthly subscription, without gluing your eyes to a bulky television set clamped to a wall. If you own a compatible phone or tablet, live and work in an area where TVplus service is available, and follow local channels more passionately than others, you should certainly give it a shot.