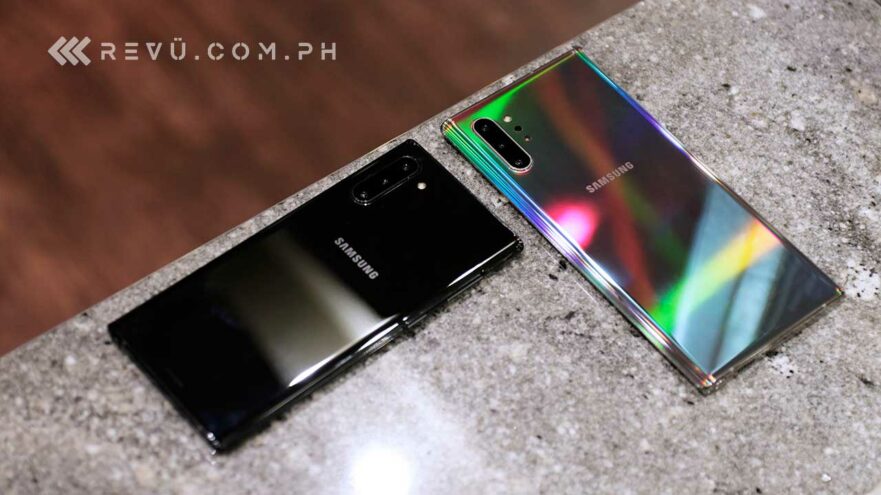 Samsung has announced the latest entries to its big-screen flagship series. The Samsung Galaxy Note 10 and Galaxy Note 10 Plus have arrived, and we have all the details you need about these smartphones, which will be released in the Philippines later this month.

Available in white and black colors, the Samsung Galaxy Note 10 range’s first day of release in the Philippines is August 23, the same day the phones hit stores in Korea and other parts of the world. That’s good news if you’re in the market for a new flagship phone and saving money isn’t a huge criteria.

The series has undergone a slight facelift, yet its overall look and functionality remains intact. The S Pen stylus, a long-time differentiator of the Note devices, looks unchanged at first glance — it’s even the same size for both Note 10 models — but it now supports air-gesture controls first introduced with the Galaxy Tab S6.

Among the gestures Samsung introduced are swipe-left and swipe-right, which allow you to scroll through photos. Twirling the stylus in a circular motion, on the other hand, lets you zoom in and out. As with the Galaxy Note 9, you can press the button on the S Pen to take pictures.

Unfortunately, unlike last year’s model, the Note 10 and Note 10 Plus are missing a headphone jack, which is a first for a Samsung handset. It’s not that bad considering the lower cost of wireless in-ear earphones now.

The biggest change on the outside for both devices is the hole-punch selfie camera in the top-middle area. It has a 10-megapixel sensor, a decent f/2.2 aperture, and plenty of filters and effects to make your selfies more flattering. Additionally, both phones have a curved Super AMOLED screen with a fingerprint scanner embedded into it.

Per usual, the displays are gorgeous — bright, crisp, colorful — and they fill most of the front this time, thanks to smaller bottom bezels. The Galaxy A80 made headlines as the Korean manufacturer’s first all-screen offering, but the Galaxy Note 10 and Galaxy Note 10 Plus are a close second when it comes to Samsung phones that have almost no bezel at the top and bottom.

The cheaper Note 10 packs a smaller 6.3-inch display, compared with 6.8 inches on the Note 10 Plus, which takes the crown for being the biggest top-end Samsung smartphone we’ve seen so far this year.

Another major change is in the optics. The Note 10 has three cameras on the back, with dedicated lenses for ultra-wide and portrait shots, while the Note 10 Plus sees a TOF sensor lumped in with the other camera lenses, for a total of four cameras, or double what the Note 9 had.

We have yet to test the new camera systems extensively, but based on the night shots we took earlier, it seems the company has put a ton of work into improving the low-light performance. Even without switching to Night mode, the cameras still take great photos.

For internals, the Galaxy Note 10 and Galaxy Note 10 Plus are equipped with the latest Exynos 9825 chipset from Samsung. It is built on a 7nm process, compared with the older Exynos 9820’s 8nm process. A smaller manufacturing process generally results in better performance and battery life.