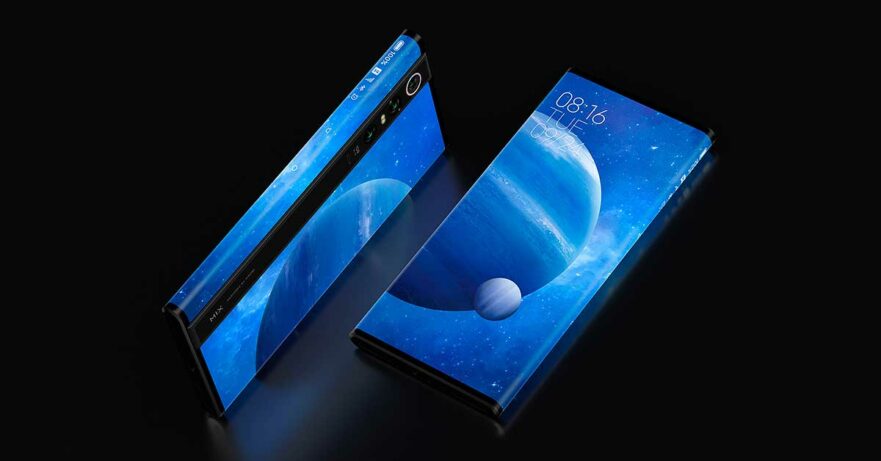 In addition to the Mi 9 Pro 5G, which is the cheapest 5G phone launched so far, Xiaomi today announced an even more impressive phone with a crazy design that extends beyond borders.

Unlike previous releases in the MIX lineup that have all-screen designs made possible by either relocating the selfie camera to the bottom bezel or incorporating a sliding mechanism, the Xiaomi Mi MIX Alpha actually goes beyond covering the entire smartphone face with a display.

Xiaomi calls it a “Surround Screen,” and it wraps all the way around the back like a piece of paper to give the device a screen-to-body ratio of 180.6%. For comparison, the Samsung Galaxy Note 10 Plus has a 91% ratio. The newly announced Vivo NEX 3? 99.6%.

The Surround Display allows #MiMIXAlpha to have a screen-to-body ratio that reaches an astonishing 180.6%.

Challenge the impossible, to make the future possible. pic.twitter.com/6l7ZWzUt5P

The display fills up almost the entire handset — front, side, and back — with the side of the phone displaying status icons like battery indicator and having pressure-sensitive areas that function as volume buttons.

The Xiaomi Mi MIX Alpha doesn’t have a physical fingerprint scanner on the rear; instead, you unlock the unit by resting your finger on a side-mounted sensor under the screen. To replace the earpiece and loudspeaker, the display vibrates to produce sound for voice calls and media playback.

Xiaomi September 24 product launch video. Fast-forward to 2:01:05 for the part where the Xiaomi Mi MIX Alpha is unveiled

The only bezel on the Mi MIX Alpha is a narrow vertical strip that runs across the back. It houses a triple-camera setup that pairs a 108-megapixel shooter with a 20-megapixel ultra-wide-angle camera and a 12-megapixel telephoto camera for 2x optical zoom. The main sensor was co-developed by Samsung and Xiaomi and can shoot 12,032 x 9,024 resolution photos. By default, it takes 27-megapixel pictures for better light sensitivity in low light.

The smartphone doesn’t have a dedicated camera in front, but you can use the screen on the back as a viewfinder to take a 108-megapixel selfie. Pretty cool, right?

As for the rest of the specs, the Mi MIX Alpha comes with a Qualcomm Snapdragon 855 Plus chip with a 5G modem, 12GB RAM, and 512GB storage. It also gets a 4,050mAh battery inside capable of 40-watt wired charging. It will run MIUI 11 based on Android 10 out of the box.

The Xiaomi Mi MIX Alpha is set to go into limited-scale production later this year and will be available by December for ¥19,999, a price which translates to around P146,846 or $2,814. That’s more than the Samsung Galaxy Fold and the yet-to-be-released Huawei Mate X. And that’s about four Apple iPhone 11 64GB models.

The eye-watering price tag suggests it won’t get an international release, so we won’t expect to find it at official Xiaomi stores outside of China, much more in the Philippines. We’re hoping to get our hands on it, though.

With groundbreaking innovations, Xiaomi’s mission is to make a truly disruptive product with #MiMIXAlpha pic.twitter.com/xbnt3H11Xz