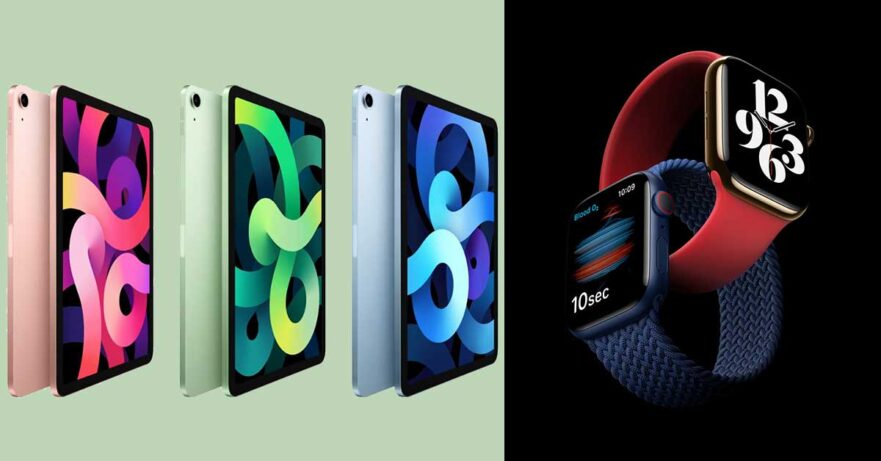 As promised, Apple introduced a bunch of new devices today — and as expected, none of them was an iPhone 12. However, there were plenty of shiny toys shown off, including an iPad Air refresh that basically makes the current iPad Pro lineup less relevant.

Also, if you live in the Philippines, you’ll be happy to know that all the new hardware Apple revealed today are already listed on its official website with local pricing. You’ll have to check back later for availability, though.

The 2020 iPad Air is easily the most impressive device Apple announced in its annual September product event. It features a larger, more bezel-less 10.9-inch Retina screen than the base-model iPad and a denser resolution coming in at 2,360 x 1,640 pixels. Touch ID is also now integrated into the top power button.

Also new to the latest iPad Air is USB-C fast charging up to 20 watts. It likewise gets Apple Pencil support and adds Magic Keyboard as well as Smart Keyboard Folio compatibility. But even more important is the silicon inside. The company debuts its 5nm A14 Bionic CPU with six cores and offers a 30% GPU boost compared with older generations. Apple claims it delivers double the graphics performance of the average laptop.

This year’s Apple iPad Air will ship in October starting at P33,990 (around $702) for the 64GB storage Wi-Fi model. The price of the Wi-Fi + Cellular option starts at P41,990 ($868). The tablet comes in five refreshing color options, including Rose Gold, Green, and Sky Blue.

Apple has also updated its entry-level iPad, which is celebrating its 10th anniversary this year. The regular iPad features a 10.2-inch Retina display and an A12 Bionic chip that runs iPadOS 14 out of the box. And just like the iPad Air, it can connect to Apple’s full-size Smart Keyboard and Pencil.

The Watch Series 6 is Apple’s latest product in its mainstream line of smartwatches. It maintains the same overall design and aesthetic of the Watch Series 4 (and Watch Series 5), but packs a couple of new sensors for improved sleep tracking and blood-oxygen-level monitoring.

The Series 6 also ships with a new S6 processor that promises up to 20% better performance over the previous model, but still provides up to 18 hours of battery life like the Series 5. It comes with fast charging, though, with the ability to go from zero to full in about an hour and a half.

You can purchase the Apple Watch Series 6 in blue, gray, gold, and silver finishes, as well as a new Product (RED) finish that should turn heads. The new smartwatch ships in select countries beginning September 18.

The Apple Watch SE, similar to the 2020 iPhone SE, is a watered-down version of the current-gen Apple product that skips features to arrive at a lower price tag. In the case of the company’s entry-level smartwatch, it drops the Always-On Retina screen of the Series 6, as well as its blood-oxygen monitor. It also runs on a slower processor, though Apple says it will deliver up to two times faster performance than what the Series 3 is capable of.

Apple September 2020 event, in case you missed the livestream. Program starts at the 1:09 mark