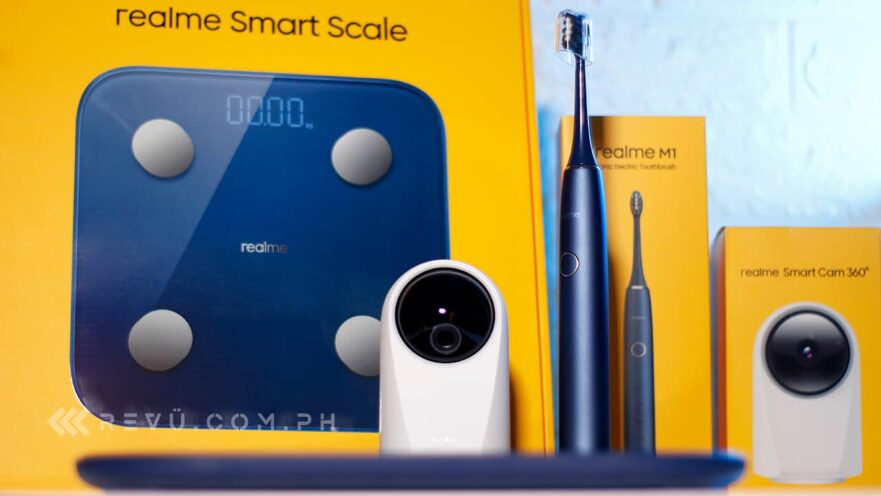 All will be available starting November 11 in time for Realme Philippines’ 11.11 Salebration on Lazada and Shopee. The MediaTek Helio G85-based Narzo 20, which we reviewed recently, will initially go on sale on the said date. Even better, the new smart devices will be offered at discounted prices at Realme’s official brand store on the two ecommerce platforms.

Keep scrolling to view the local pricing, as well as the limited-time discounted offers.

Realme’s new electric toothbrush with a sonic motor offers four cleaning modes when brushing for different use cases. There’s Soft for users with sensitive teeth; Clean for daily use; White for a deep clean; and Polish for shining teeth. It also ships with two antibacterial toothbrush heads and a small charging pedestal that simply requires dropping the toothbrush onto a peg. Fully charged, it lasts up to 90 days.

With the Realme Smart Scale, you’re looking at a digital scale that can help you achieve your personal fitness goals. It can track a person’s weight, BMI or body mass index, body-fat percentage, and heart rate, among others, using high-precision sensors. You can also use it to accurately weigh small items and pets (provided you can keep them on the scale long enough). Its tempered glass top incorporates a hidden LED display for a minimalist look.

This luggage is built using a three-layer composite PC structure that is not only lighter but also sturdier and more resistant to scratches than the traditional ABS material. It comes with rotating 60mm wheels made with elastic materials to reduce noise and allow you to move around with less effort. The Adventurer Luggage also features a built-in TSA [Transportation Security Adminitration]-approved lock for peace of mind during international travel.

During the sale event, customers can also get discounts up to P2,500 on select Realme smartphones, including the Realme X3 SuperZoom and Realme C, 6, and 7 series. Meanwhile, the Lazada-exclusive Realme Narzo 20 will be P500 off its regular price. Wearables and accessories are getting markdowns as well.