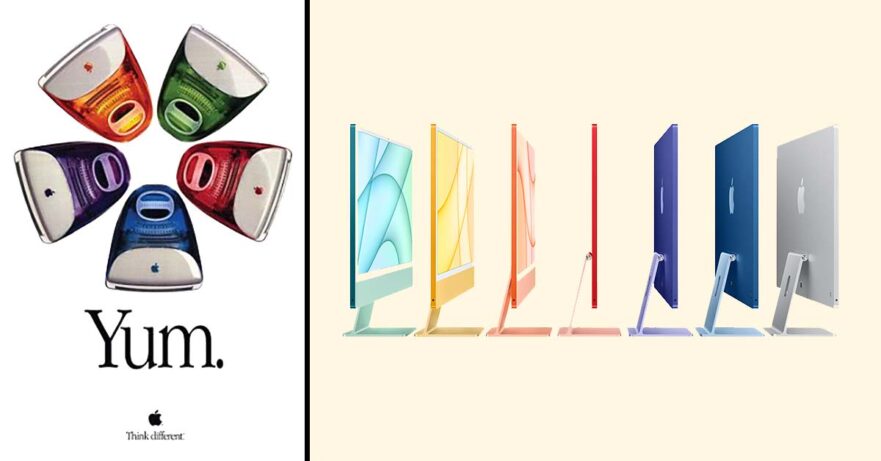 Apple has unveiled a bunch of new and exciting products, including Apple Silicon-powered iPad Pro models, Apple TV 4K with a next-gen Siri remote and A12 Bionic internals, and Apple AirTag, a small circular tag that will allow you to track items within the Find My app on your iPhone or iPad. Oh, the American tech giant also introduced a purple finish for the iPhone 12 and iPhone 12 mini and updated the M1 Mac mini with an optional 10 Gigabit Ethernet port.

From our perspective, though, the biggest announcement earlier today — both physically and figuratively — was, for those of our readers who weren’t born yet at that time, a throwback to the colorful classic iMacs from the late ’90s and early 2000s. The all-new redesigned Apple iMac features a slimmer, 24-inch display offering a native 4.5K resolution, 500 nits of brightness, and the company’s True Tone tech. It’s only 11.5mm thin, too, and is available in an array of striking colors that can match your style and accent any space.

In the Philippines, the new Apple iMac is officially priced as follows:

As always, you can change the configuration of your iMac to suit your needs. There’s even the option to buy an iMac with a built-in VESA mount adapter instead of the regular metal stand.

Besides the all-new screen and colorful redesign, Apple is throwing in better speakers, mics, and a 1080p video camera with a larger sensor for your FaceTime and Zoom calls. You also get a magnetic power cable that attaches to the back of the display, up to four USB-C/Thunderbolt and USB-C ports, plus a standard headphone jack. Apple includes a color-matched Magic Mouse and Magic Keyboard as well, but the Touch ID version of the keyboard is exclusive to the pricier models. That is, unless you upgrade the base variant to the Magic KeyBoard with a fingerprint-scanning button.

The 2021 iMac makes the leap to Apple’s ARM-based M1 silicon, which the company introduced in the MacBook Air, MacBook Pro, and Mac mini in November. The first-generation of Apple hardware built around M1 chips were widely well-received and has seen immense adoption among content creators and video editors who want a portable machine for getting professional work done. While the iMac isn’t built for that, it should provide more than enough processing power for the kinds of activities high-end desktops are made for.