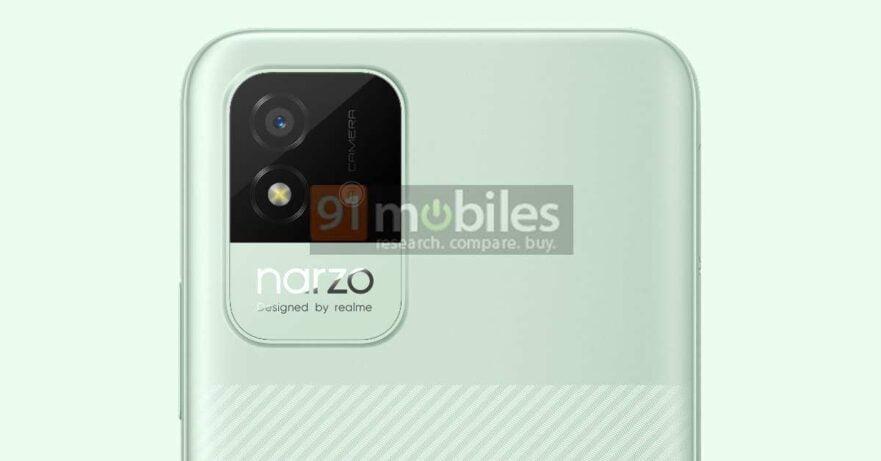 In the Philippines, the Realme GT Master Edition will be launched alongside the Realme Book laptop September 23. In India, it’s the Realme Narzo 50 series, among others, that will go official a day after.

We already know the key specs of one of the smartphones that will be introduced September 24; the brand has been teasing the features of the Realme Narzo 50A since four days ago. Today, though, details of a model called the Realme Narzo 50i have emerged.

India-based technology site 91Mobiles got ahold of renders of the Narzo 50i, showing what the handset’s design is.

The images reveal that on the upper-left side of the device’s rear is a rectangular camera module. The black island houses one sensor, an LED flash, and the phrase “AI camera.” The lower part of the module, on the other hand, is the branding.

The Realme Narzo 50i’s back panel has a two-toned look, so to speak. Above is a smooth, minimalist appearance, while below are diagonal lines that occupy a bigger portion of the cover. Surprisingly, you can also see speaker vents there as well.

When viewed from the back, the volume rocker and power button are located along the left edge. At the bottom, there’s a hint that you’ll find a 3.55mm audio jack there.

91Mobiles said that it still doesn’t know what the specs of the unit are. But it did claim that the Narzo 50i will be the cheapest Narzo phone from Realme yet.