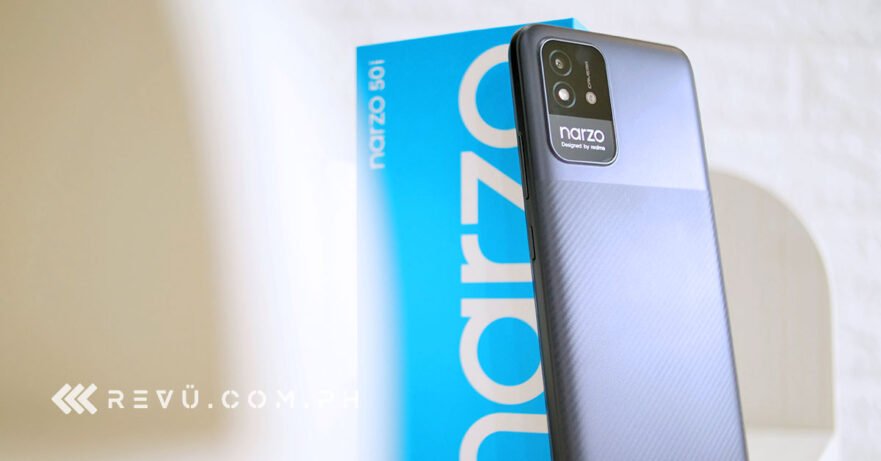 Just in time for the holidays, Realme has launched the Narzo 50i in the Philippines to give price-conscious shoppers another option — among the many — in the bargain basement. We’re told this is Realme’s last smartphone launch in the country for 2021.

Locally, the Realme Narzo 50i is offered with 4GB RAM and 64GB of internal storage. The lone variant costs P6,290 (around $125) and arrives in two colors — Mint Green and Carbon Black.

Those who’ll buy the handset or any Realme device with a minimum spend of P5,000 ($99) until January 2, 2022, from any Realme flagship store or authorized partner retailer has a chance to win one of 16,000 Realme TechLife prizes, plus an e-raffle ticket for a chance to drive home a Mitsubishi Mirage G4 subcompact car. (To register and see the complete promo mechanics, swing by this page.)

In case this Narzo has piqued your interest, read on for our unboxing and hands-on.

As with previous Narzo models, the 50i ships in a blue box with a big Narzo branding in white on the front. The size of the box isn’t too big for the contents, and the blue color is pleasing to the eye and provides a nice contrast to the Realme badge in bright yellowish gold.

Per usual, the box opens to an inner compartment with Realme’s “feel the power” mantra for the Narzo line. You’ll find the SIM-eject tool here, as well as some documentation and a warranty card.

Removing the compartment gives you your first look at the phone, which is wrapped in semi-clear plastic. A warning label on the plastic reminds you that the Realme Narzo 50i carries a non-removable battery and only supports nano-SIM cards.

Under the handset, you get a 10-watt white charging brick and a microUSB cable. Unfortunately, the latest Narzo smartphone doesn’t have a USB-C port for charging and file transfer, but we suppose that’s fine, considering its intended market may not have a bunch of USB-C devices lying around anyway.

Also, Realme doesn’t bundle the Narzo 50i with a silicone case, so you may need to look at the third-party market for decent options. You won’t see a set of wired earphones here either, although that’s expected of Realme handsets.

The smartphone itself looks great, but feels better in the hand, thanks to Realme’s familiar two-texture finish at the back. The lower portion of the panel sports a carbon-fiber-like material, while the smooth finish on the top part of the phone where the camera module sits adds another dimension to the hardware and gives it contrast.

Delightfully, the Realme Narzo 50i is an exception rather than the rule. Not only is the back not a fingerprint magnet — which earns many brownie points in our book — it also looks and feels better than most of its budget-priced contemporaries. For a phone that carries a 5,000mAh or more battery backup, you automatically expect some bulk; thankfully, that’s not really the case here.

For most users, the Narzo 50i is still a two-handed device, though. The screen measures 6.5 inches across and offers HD+ resolution at up to 400 nits of peak brightness. The screen-to-body ratio is decent, coming in at around 88%. Meanwhile, the U-shaped notch at the center houses a 5-megapixel camera for selfies and supports Portrait mode, AI Beauty, HDR, and face recognition.

Face unlock works as intended in daylight and bright indoor lighting. However, the absence of a physical fingerprint reader is a bummer, particularly for those who are used to seeing fingerprint sensors on their smartphones. In terms of hardware features, this is probably the biggest omission on the Narzo 50i, especially considering there is one on the Narzo 30A.

Around the back, the new Narzo features a single 8-megapixel camera with f/2.0 4P lens. You can use it to take portraits, panoramas, as well as timelapse footage, and there’s even a Manual mode for users who know their way around smartphone cameras.

The sizable 5,000mAh battery, meanwhile, is rated for up to 43 days of standby or up to 10 hours of gaming, or two full days of mixed use based on our experience. If you need to extend the phone’s battery life, enabling Ultra Saving mode in the Settings will stretch your battery by limiting the background activity of apps and disabling automatic syncing.

Running the show is an octa-core Unisoc SC9863A SoC with two clusters having a maximum clock frequency of 1.6GHz. You also get PowerVR GE8322, which is par for the course among entry-level phones. We haven’t done a lot of testing at the time of posting this article, but the chipset is comparable with the Helio G35, except the latter is built on a superior 12nm process versus Unisoc’s 28nm design. And we’re pleased to report that it can run modern games like Mobile Legends at reasonable frame rates with the settings turned down.

Another highlight here is the Android experience, with the Narzo 50i booting the Go edition of Android 11 on top of its own Realme UI. While it might not be everyone’s cup of tea, it makes for a smoother, more responsive experience all around, despite the budget hardware.