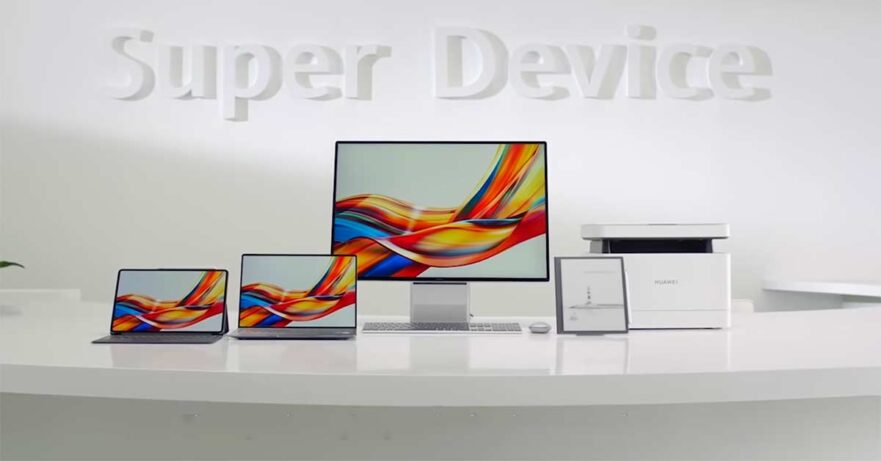 Huawei has been busy pushing out new products for its growing interconnected Huawei Smart Office ecosystem.

The technology giant today announced a bunch of PCs and ultraportables at Mobile World Congress 2022 in Barcelona, including an updated MateBook X Pro model, an e-ink tablet that supports stylus input, an iMac rival, a laser printer, and the company’s first convertible with an OLED screen. Let’s take a look at each device and see what they bring to the table.

Largely a refresh of last year’s MateBook X Pro, Huawei’s latest flagship ultraportable brings a 14.2-inch IPS-LCD touch display with a 90Hz refresh rate and an unconventional 3:2 aspect ratio. It also features small bezels and an HD webcam along the top bezel, same as the MateBook 14s, signaling the end could be near for Huawei’s pop-up camera in the keyboard area.

The MateBook E is a 2-in-1 Windows 11 tablet with an optional magnetic keyboard case. The main attraction here is obviously the OLED display; it’s reasonably sized at almost 13 inches and boasts a high 2,560 x 1,600 resolution.

The touchscreen supports Huawei’s second-gen M-Pencil stylus as well. Inside, you get a choice between 11th Gen Intel Core i3, Core i5, and Core i7 chips alongside Iris Xe graphics and up to 16GB RAM and 512GB storage.

The newest member to the MatePad family, reviving your reading & office experience.#SuperDeviceSuperCreativity pic.twitter.com/d4nm5Olb1k

Huawei MatePad Paper: What we believe is the most interesting device Huawei debuted at MWC 2022

Depending on who you ask, the Huawei MatePad Paper might be the most interesting device the company debuted at MWC 2022. It’s Huawei’s first e-reader, but it’s certainly more useful than a Kindle, thanks to the 10.3-inch grayscale screen’s ability to recognize pen input.

Besides text, the MatePad Paper can also display images and even video — though the latter is probably a hard sell to anyone who buys a tablet primarily to watch YouTube and Netflix series and movies. It boots a custom version of HarmonyOS 2.0 and comes with 4GB RAM as well as 64GB of storage. The built-in battery, meanwhile, could last you up to four weeks on standby.

The MateStation X is an all-in-one Windows 11 PC with AMD Ryzen 5 5600H internals; a 28.2-inch, 3:2 IPS-LCD touchscreen with 4K+ resolution; and an integrated three-speaker setup, all encased in a metal unibody design.

The display is said to cover 98% of the P3 color space, making it ideal for editing photos and video. And to make it more appealing to creators and office use, Huawei will be bundling a wireless keyboard with a built-in fingerprint reader and a Bluetooth mouse with the PC.

Another first for the company, the Huawei PixLab X1 is a desktop laser printer that is powered by the HarmonyOS operating system. It can print up to 28 pages per minute and supports automatic double-sided printing as well. The printer also doubles as a copier and a flatbed scanner.

Highlights of Huawei’s launch at MWC 2022