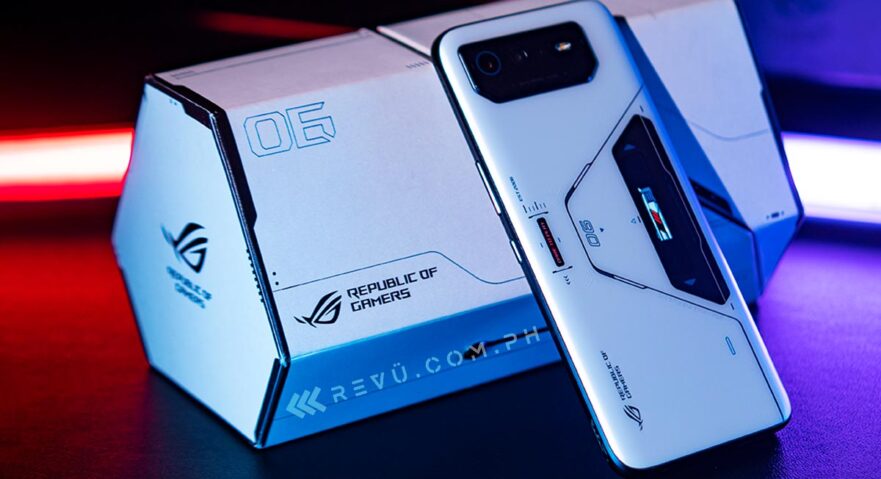 Just a few days ago, Black Shark launched the Black Shark 5 and Black Shark 5 Pro in the Philippines. Now, it appears their brief reign as the country’s ultimate gaming-phone duo has come to an end. ASUS today unveiled the first gaming smartphone powered by the Qualcomm Snapdragon 8 Plus Gen 1, the ASUS ROG Phone 6 series.

(Update, July 15: Now that we’ve spent weeks with the ASUS ROG Phone 6 Pro, we’re ready to share more of our thoughts on it. Check out our video now!)

Similar to its predecessor, the lineup will comprise two variants — the ROG Phone 6 and ROG Phone 6 Pro — with the main difference between the two being the customizable ROG Vision panel on the back of the top-end model. The standard ROG Phone 6 will feature ASUS’ Aura RGB LED lighting system on its rear instead.

The RAM configuration is also slightly different, as the ROG Phone 6 Pro can be configured with up to 18GB of fast LPDDR5 RAM, whereas the vanilla variant maxes out at 16GB RAM. Regardless of which version you opt for, you’re still looking at a gaming powerhouse built around Qualcomm’s newest and mightest Snapdragon 8 Plus Gen 1 5G chipset, which uses TSMC’s 4nm manufacturing process and boasts a 3.2GHz prime core, to go along with an Adreno 730 GPU and ASUS’ own X Mode performance-tuning platform.

ASUS has confirmed that the ROG Phone 6 series will be available in the Philippines at a later date, with local pricing and availability details to come.

The regular ROG Phone 6 will be available in black and white colors, while the Pro model is going to be offered in a lone white variant. It’s also worth mentioning that the new AeroActive Cooler 6 will not be bundled with the non-Pro edition, but it will come standard with the ROG Phone 6 Pro. The Aero Case for the new series and 65-watt HyperCharge adapter will ship with both editions, we’re told.

In terms of optional accessories, there’s also the ROG Phone 6 Glass Screen Protector, which is compatible with ROG Phone 6 and ROG Phone 5 models, as well as the Devilcase Guardian Case for increased drop and bump protection.

We’ll be coming out with our full review of the ASUS ROG Phone 6 Pro in the coming weeks once the local embargo is lifted. In the meantime, read our hands-on preview of the ROG Phone 6 Pro to find out what ASUS has cooked up for the latest iteration of its popular gaming-phone line.

The ASUS ROG Phone 6 Pro arrives in a large ROG-themed white box that opens nicely with an opening flap to reveal the phone wrapped in semi-clear plastic. The phone itself looks suitably handsome and gaming-ready, combining a rounded metal frame in a matte-black finish with a satisfyingly smooth rear panel that proudly shows the ROG design ethos in full force, complete with little design details, such as the blue accents on the power button, main camera lens, and SIM card tray.

Notably, the ROG Phone 6 Pro also offers IPX4-rated splash resistance, making it the first gaming phone on the market that can withstand splashes and accidental contact with water. That’s always a plus for users who live in a tropical country like the Philippines.

The left-hand side features a USB-C port, primarily for the snap-on cooling fan, though it can be used for charging the phone as well during heated gaming sessions in landscape orientation. The right side carries the touch-sensitive L/R shoulder triggers — as expected on a gaming-oriented device. The bottom of the ROG Phone 6 Pro has a second USB-C port alongside a standard 3.5mm headphone jack for immersive wired audio.

Inside, there’s the Qualcomm Snapdragon 8 Plus Gen 1, which is said to offer up to 10% faster CPU performance and up to 30% better power efficiency than the previous-generation Snapdragon 8 Gen 1. Performance-wise, it will be unfair to comment on it at this point, as we have yet to really put our review unit through its paces, although we can confirm that the top-of-the-line ROG Phone 6 Pro unit we’re using easily breaches the 1,000,000 mark in Antutu, even without the AeroActive Cooler 6 attachment.

The top-of-the-line ROG Phone 6 Pro unit we’re using easily breaches the 1,000,000 mark in Antutu, even without the AeroActive Cooler 6 attachment

For all-day battery life, there’s a 6,000mAh battery inside, same as last year’s model. According to ASUS, it can be charged from zero to full in under an hour, or 70% after 30 minutes plugged in, using the included 65-watt fast charger.

The other highlight here is, of course, the display — or displays, if you count the ROG Vision secondary screen on the back of the Pro variant. The ROG Phone 6 series packs a 6.78-inch FHD+ Samsung E4 AMOLED display with a 165Hz refresh rate and a 720Hz touch sampling.

For pictures and videos, ASUS has fitted the ROG Phone 6 Pro with a 50-megapixel Sony IMX766 main image sensor, alongside a 13-megapixel ultra-wide option and a dedicated macro camera. You also get a 12-megapixel Sony IMX663 sensor for selfies using the front-facing camera on the top bezel.