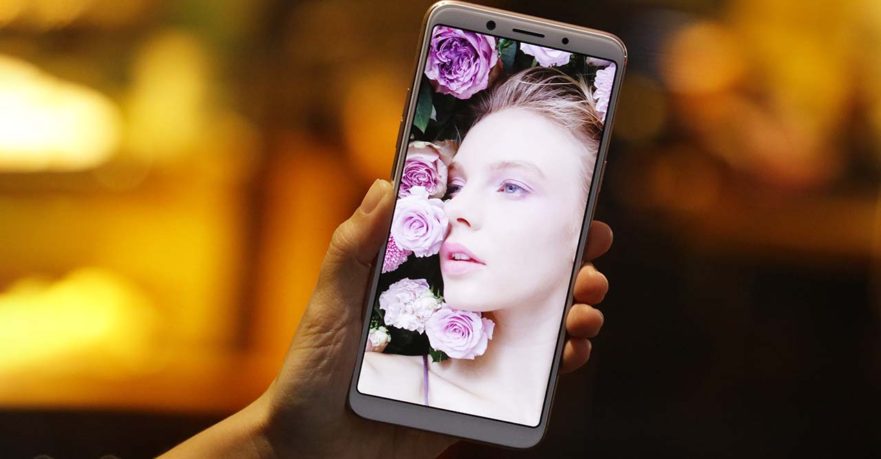 OPPO Philippines last week opened a new chapter as a selfie-first smartphone brand when it launched the OPPO F5 with an 18:9 screen and some A.I. or artificial-intelligence smarts to the camera.

So, how does it compare with the F3 from five months ago (OPPO obviously skipped the F4)? What’s the phone like to live with, as a daily driver? And is it a good buy if you want something that can do more than take glorious selfies? We break down the phone’s redeeming and not-so-redeeming qualities in this review.

The OPPO F5 is priced at P15,990 (around $309) in the Philippines and will be sold in black and gold colors. It will be available in local stores from November 4.

Let’s discuss the bodywork first. The F5 has the same metal finish as standard F series models from previous generations. But whereas the OPPO F3, F1s, and F1 feel bloated in the hand, their successor feels sleek, to the point that the curves on the sides bite your hand a little bit. 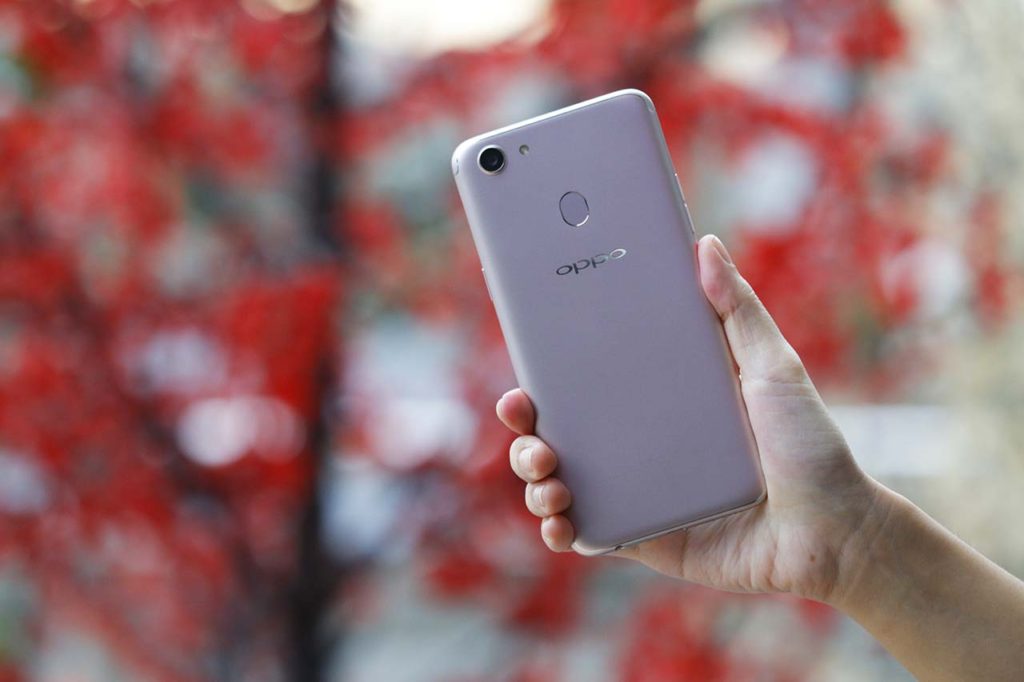 Whereas the OPPO F3, F1s, and F1 feel bloated in the hand, the OPPO F5 feels sleek.

The front panel protrudes from the body, which is an unusual sight, though the glass protecting the panel from dings and scratches is convexly curved, so your fingers slide nicely off the edges while pulling off swipes and other gestures.

The antenna bands at the top and bottom bend and run across the backplate and are not immediately noticeable. The back-facing fingerprint sensor for unlocking the phone is, with its unusual oblong shape.

The sensor works quickly to bypass the security when it registers, but those with smaller hands might have some grumbles about where it is located. A few millimeters lower, and its location would have been perfect.

The audio drifting from the single speaker at the bottom edge gets pretty loud and can fill a small room, even though the sound distorts at higher volume levels. 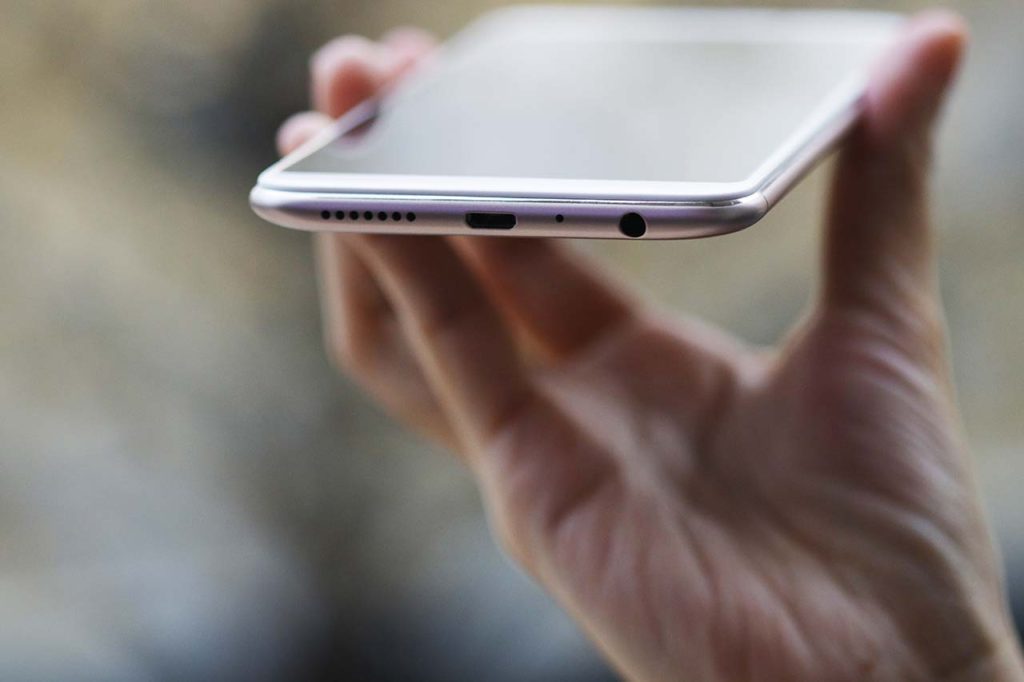 The audio drifting from the single speaker at the bottom edge of the OPPO F5 gets pretty loud and can fill a small room.

Those who enjoy private listening with their favorite pair of headphones will be pleased to know that the OPPO F5 supports higher-quality output while the 3.5mm jack is in use.

At 6 inches diagonally, the LCD display is big without being too big. The resolution is a crisp 1080p. Color reproduction is pleasant and vibrant enough. What’s more, the screen remains visible even under harsh sunlight.

But the biggest story here is the wider picture format — 18:9, which offers more real estate than the 16:9 aspect ratio we’re used to. The shift to the 18:9 standard is, of course, a welcome one. 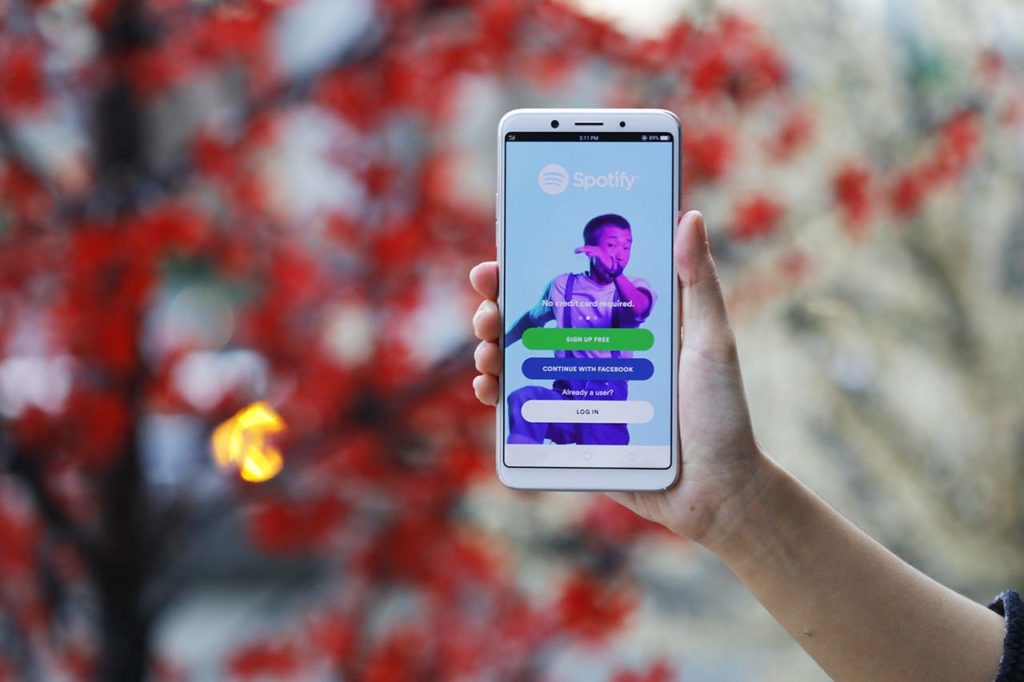 The biggest story here is the 18:9 picture format, which offers more real estate than the 16:9 aspect ratio we’re used to. A welcome change, of course.

Gaming, viewing content, reading long-form articles, to name but three — these activities all benefit in some way from a taller or wider display. It’s hard to describe without seeing it in person, but it will change how you feel about consuming content on your device.

We’ve been using 18:9 phones for a while now, and we honestly can’t see ourselves being comfortable with older screens ever again, regardless of quality.

Inside, the OPPO F5 has been put together to impress, tasking the latest octa-core Helio P23 processor from MediaTek to get things done quickly and efficiently. Fast as it is economical, it has quickly become one of our favorite processors in the midrange category.

Inside, the OPPO F5 has been put together to impress, with the latest octa-core Helio P23 powering it. Fast as it is economical, the chip has quickly become one of our favorites in the midrange category.

Oh, and the don’t get too hung up on the model name; the Helio P23 delivers faster performance than Helio P20- and P25-based phones we’ve tested. CPU usage, specifically when idle, is a big bonus and might be just enough to convince us to pick it over Qualcomm’s Snapdragon 625 and 626 chipsets.

Paired with the chip are 4GB RAM and the same powerful graphics unit in Huawei’s mainstream flagships (to be clear, we’re talking about the P10 and P10 Plus).

The resulting performance is nippy and responsive, and our unit remains cool even under heavy load, which is not at all surprising given the Helio P23’s 16nm manufacturing process. Demanding games such as NBA 2K17 and Lineage 2 run smoothly and without incident at medium-quality detail. 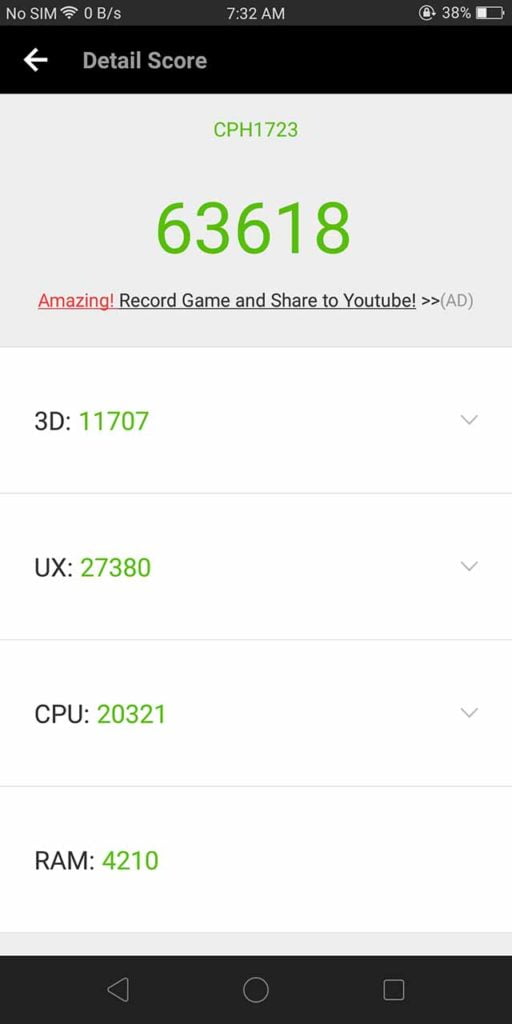 Storage shouldn’t be a stressing concern, too, as the OPPO F5 offers 32GB of onboard storage, which can be expanded further using an SD card. It’s worth noting that the device can house two nano-SIMs, as well as an SD card, all at the same time.

On a full charge, the 3,200mAh battery lasted us an entire workday. That’s including lengthy gaming sessions while sucking hard on the internet data pipe during long commutes.

The 16-megapixel, f/1.8 camera round the back is better than average, both on paper and in practice, and is able to snap photos with smoothly blurred background areas in auto mode. Colors are rendered accurately, pleasing to the eye without any tweaking, and detail is good in closeups. 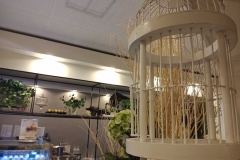 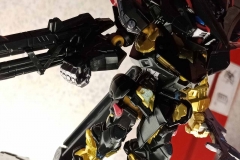 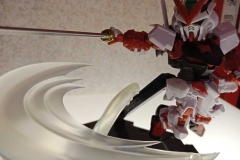 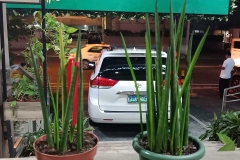 Without zoom vs. with 2x zoom

Turn to the front, and it’s another story. Ever since reinventing itself as a selfie expert, OPPO has made the secondary camera its priority number one (two and three).

The F5 is, as you may have figured out already, is no different. In fact, it’s supposed to be second to none in its niche segment, according to OPPO.

However, this isn’t simply the case of a proud company puffing its chest; the F5 has a 20-megapixel camera, up from 16 megapixels in previous iterations, with a larger sensor size for clearer, brighter selfies. The front-facer also gets a screen-flash feature to make shooting in low light less troublesome. 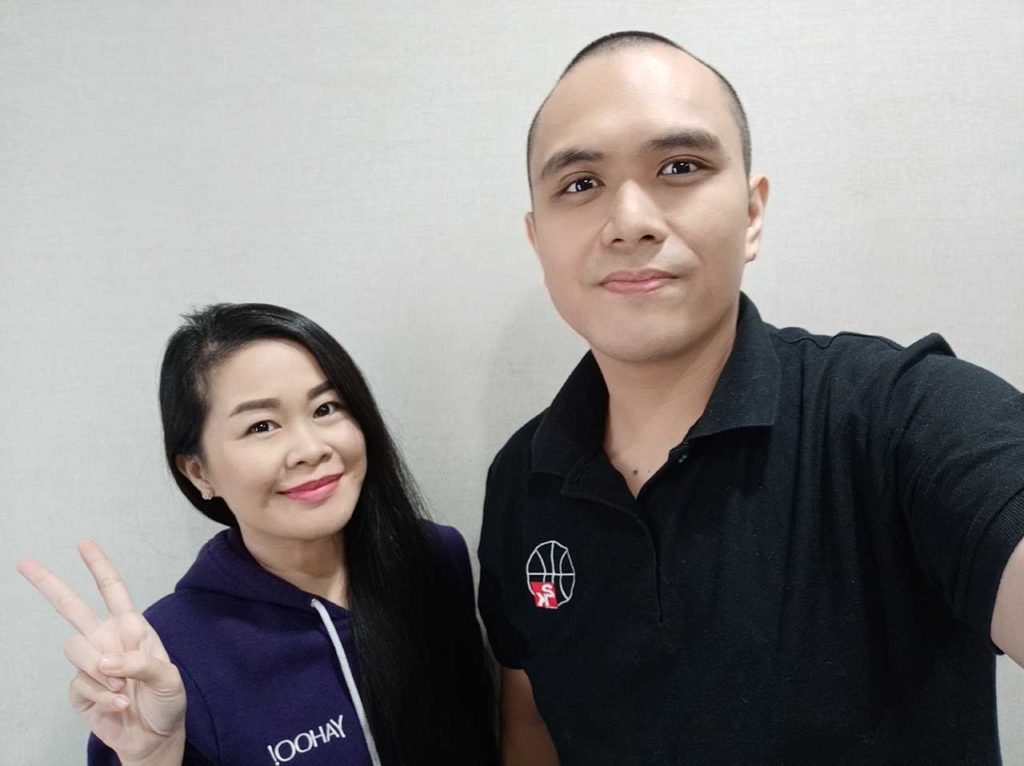 Resized sample “no filter” selfie taken with the OPPO F5

But the boldest and most significant change introduced by OPPO is the use of A.I. to make selfies look their best without giving you the likeness of a hollow plastic doll.

OPPO says it analyzed a million photographs during the development of its A.I. and trained it to identify 200 facial-recognition spots before applying edits according to age and sex. It doesn’t appear to work outside of beauty mode, which is available on both the front- and rear-facing cameras. 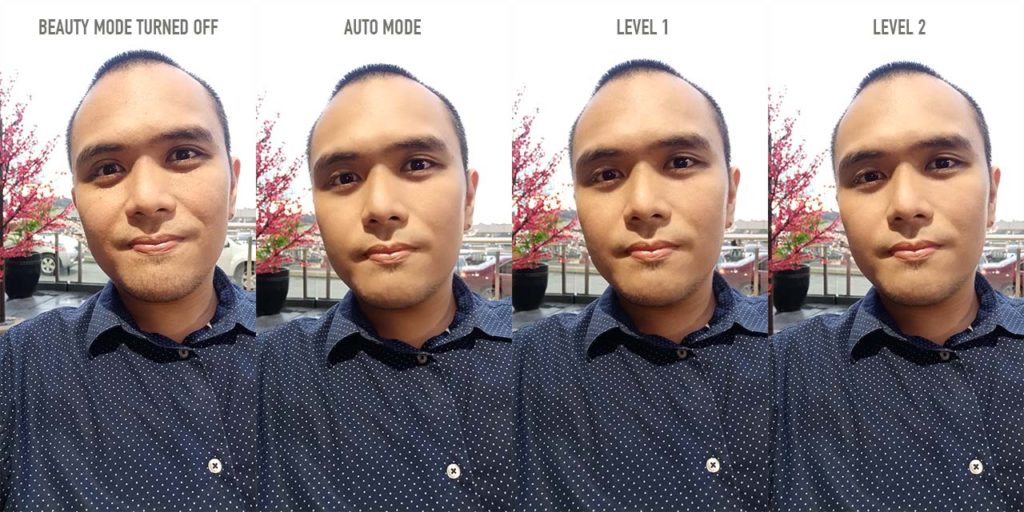 Resized sample selfies taken with the OPPO F5: From “beauty mode turned off” to “level 2” 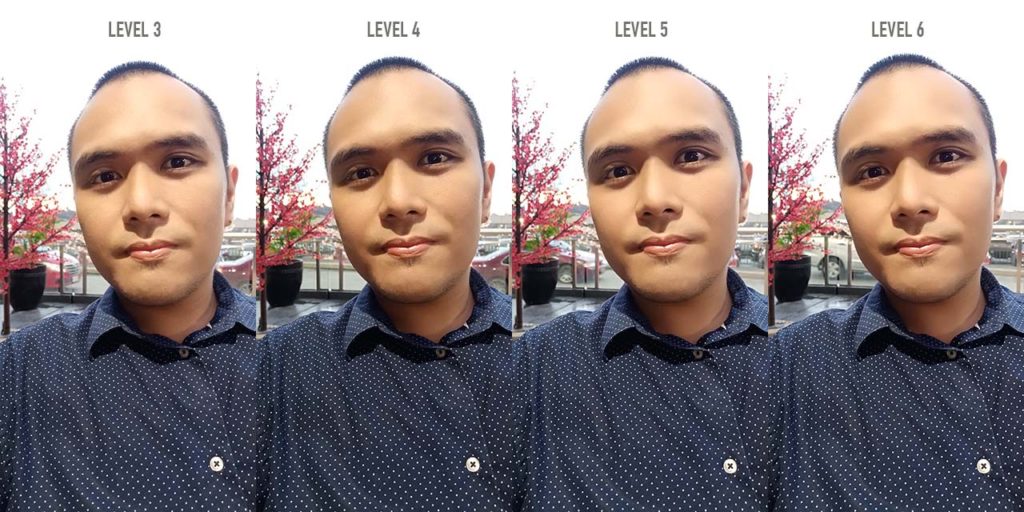 Resized sample selfies taken with the OPPO F5: From “level 3” to “level 6” 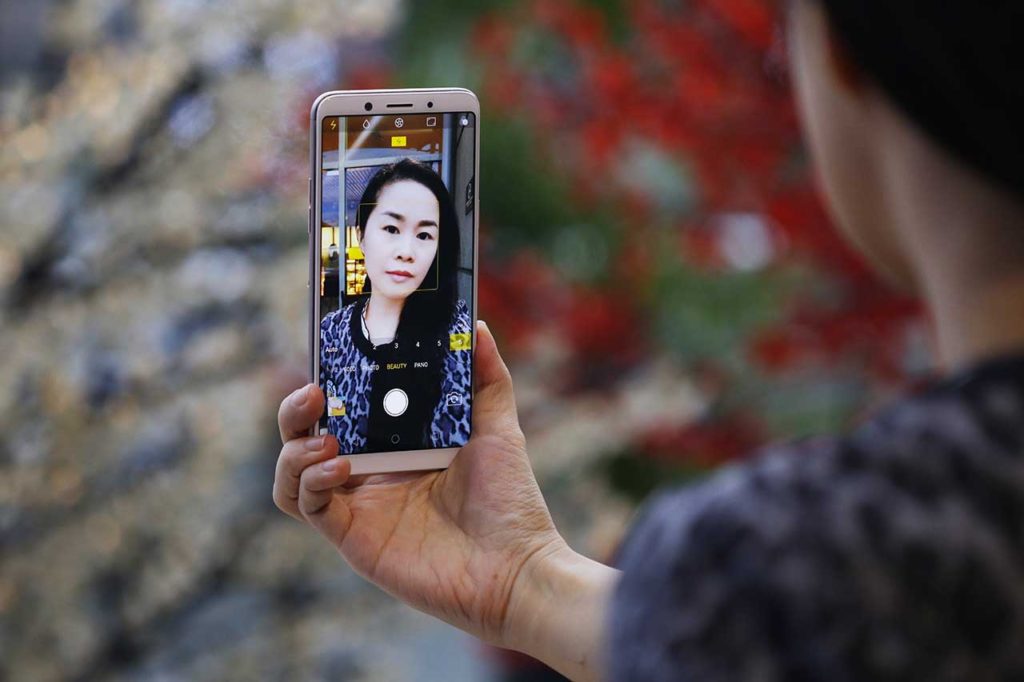 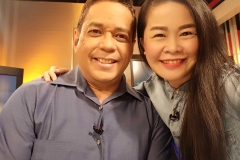 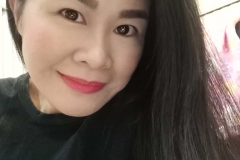 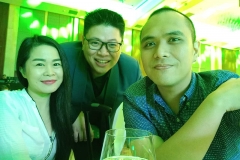 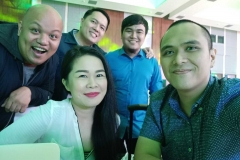 For all its technical gloss, however, the AI beauty-recognition software feels like a work in progress, though this could be due to the pre-production form of our unit. At times, our faces looked airbrushed.

In its defense, OPPO did say the results should improve the more images you take, as the F5 has the ability to analyze data and figure out on its own what to do with your mug.

While the front-facing camera system uses a single lens instead of two, which might be considered a slight breach in the selfie-smartphone formula, the OPPO F5 actually performs much better than its predecessors ever did at the cost of some versatility. You can still use it for portrait photography with a creamy background.

Frankly, there isn’t a lot that stands out. And most of our nitpicks are either hardware-related or tied to the phone’s face-unlock feature.

Let’s start with the obvious: The screen isn’t edge-to-edge, and the bezels on the side are not as narrow as we had hoped. That’s not the case with the top and bottom bezels, though, as they reduce the phone’s overall footprint, making it about the size of a 5.5-inch phone following the standard 16:9 screen ratio.

It sounds like a small distinction, but it matters to us that OPPO was able to fit a 6-inch display into a pocketable body that doesn’t require both hands or finger gymnastics to operate.

The backside camera hump means the OPPO F5 doesn’t rest completely flat on a table. Snapping the included plastic case onto the unit will allow it to lay flush with the furniture. 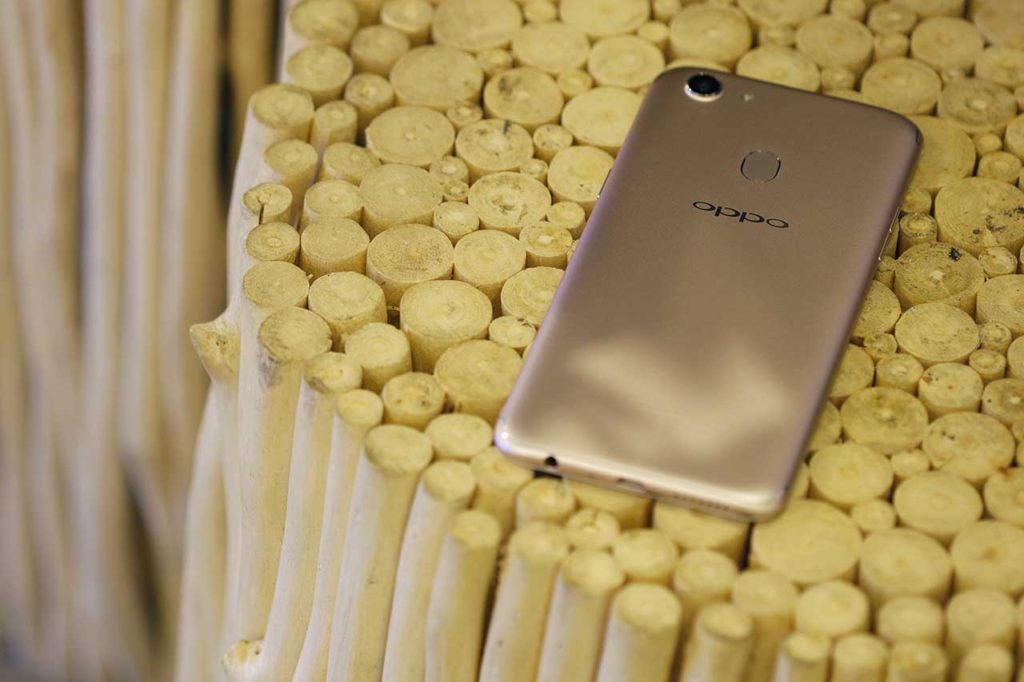 For power users who drain their phone’s battery rather quickly, the absence of OPPO’s VOOC fast-charging circuitry will be a discomfort, with the 3,200mAh battery sealed inside the F5 taking an average of 2 hours to top up chained to a wall plug.

Speaking of charging, the F5 uses a familiar, if dated, microUSB connector instead of USB-C. So we’re nitpicking a bit, but it would have been nice to see this phone adopt the same reversible port as many other models in the midrange.

READ ALSO: OPPO A71 review: A budget phone that doesn’t feel or act like one

If local and lesser-known phone brands can do it, then there is really no reason under the sun why a big player like OPPO can’t back the newer, more versatile standard.

Finally, there’s the face-unlock security feature, which is self-explanatory and works as intended in most cases, with the F5 being capable of tracking more than 200 facial features to ensure its security is up to scratch. We were hoping that we can set up more than one face per unit. For now, those allowed access to your devices would need to use the fingerprint sensor instead to unlock the F5. 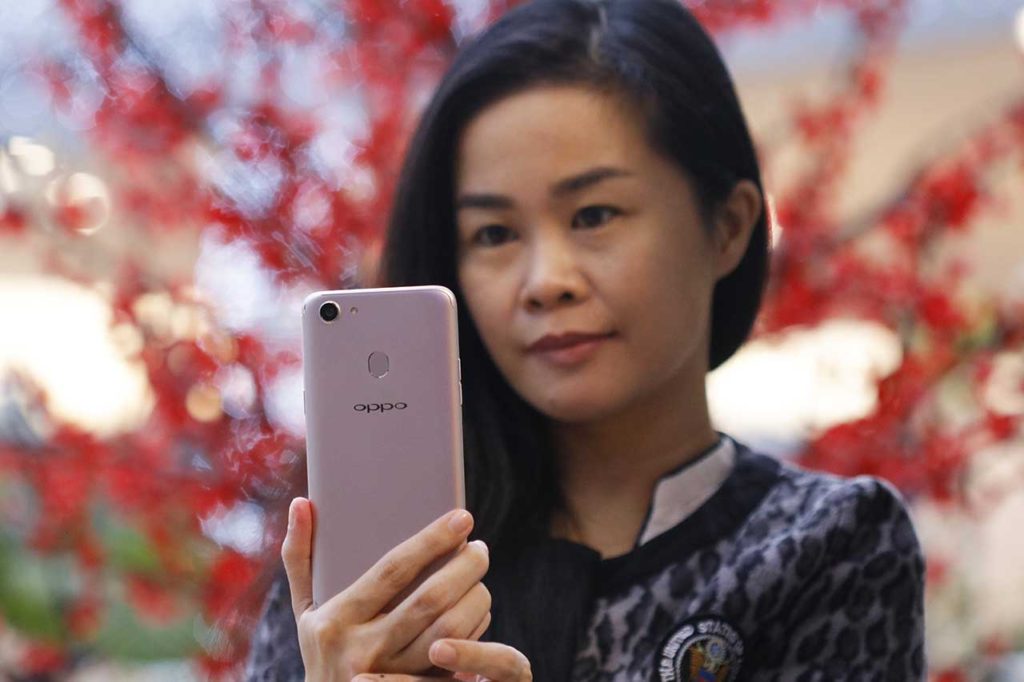 The OPPO F5’s face-unlock security feature works as intended, and we were hoping that we can set up more than one face per unit.

It’s unfortunate, because OPPO’s face-detection software is one of the best in the business and could prove useful for anyone who finds it a challenge to reach the fingerprint reader one-handed without spinning the phone around.

The OPPO F5 is a respectable jump over the model that came before it. It’s better for viewing content due to the bigger and wider display, and the inclusion of MediaTek’s all-new — and all-right — Helio P23 processor is a welcome move.

Missing the wide-angle selfie mode of the F3? Take a panorama, or better yet, use a selfie stick to get everyone in one shot. Selfies are still high up on the list, and the F5’s 20-megapixel cam can actually do more with one lens than most other systems with dual optics. The rest of the phone won’t force you to make compromises.

SEE ALSO: Inside the factory where OPPO smartphones are made

Overall, the OPPO F5 retains the appeal of the original — which is to say it isn’t just a one-trick pony — while conforming to current trends of wider picture formats and artificial intelligence. And with a competitive price of P15,990, it shouldn’t have any problems convincing customers it is a worthwhile upgrade and that they’re getting a heck of a deal. 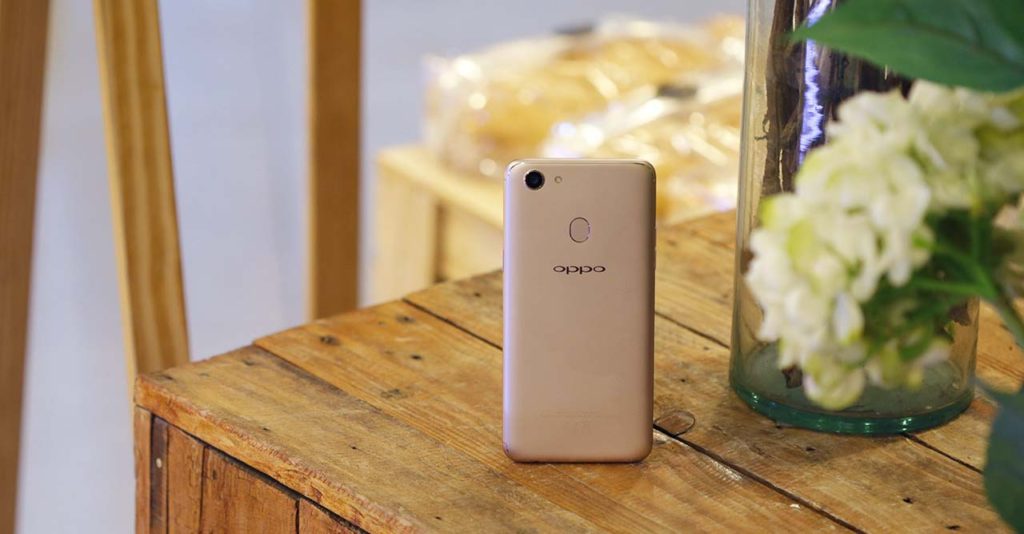 With a competitive price of P15,990, the OPPO F5 shouldn’t have any problems convincing customers it is one heck of a deal.