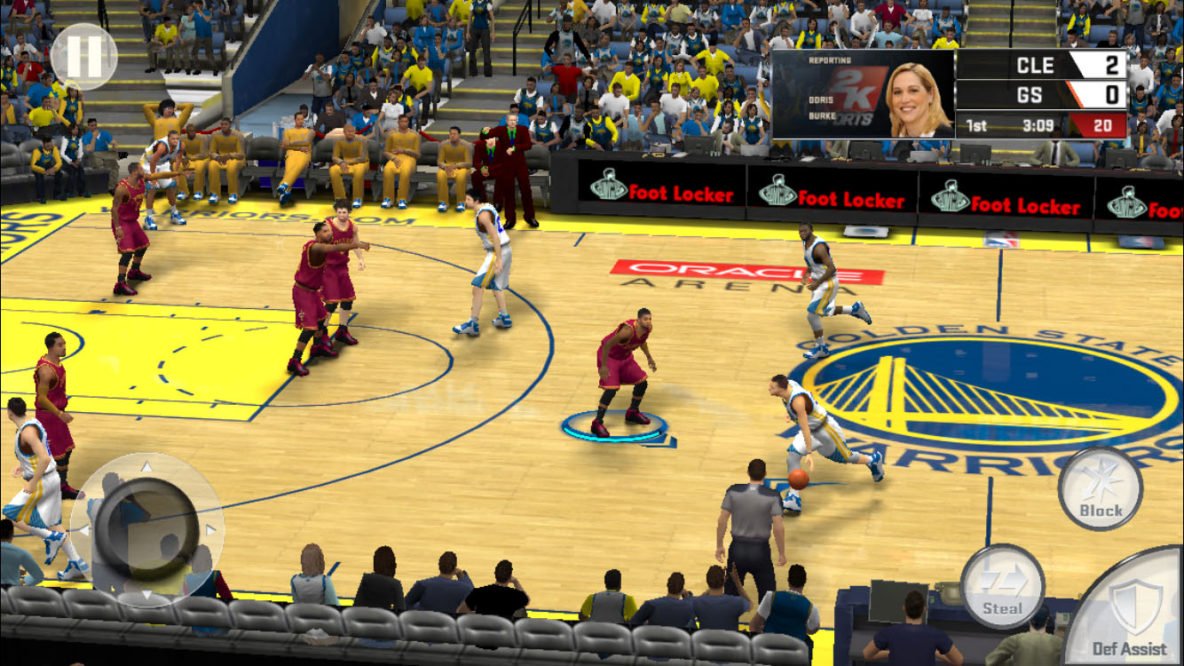 NBA 2K16 for Android and iOS wasn’t a good port — it had no audio commentary at launch; it ran slow as molasses on most devices, and many weren’t able to run it at all. A year after its release, it’s still nowhere as good as its console and PC counterpart (you can read our review here), nowhere as good as what it could and should be.

(UPDATE, OCTOBER 3: To see how different NBA 2K17 for Android is from the iOS version, read this article.)

NBA 2K17 for mobile, despite being only a year older, is a whole different ball game. It’s a much better all-around effort. For starters, there’s color commentary this time around, though Doris Burke still works the sidelines, whereas her next-gen doppelganger has already joined the broadcast booth alongside Kevin Harlan and Greg Anthony. Even worse, a bug in the game prevents you from hearing her speech.

We played NBA 2K17 mostly on an Apple iPhone 6s, and here’s what we think of the game.

The visuals are much improved over last year’s version, thanks in large part to better-looking textures and player models. Some guys even have detailed body scans, as opposed to pre-generated ones. Many marquee names like LeBron James, Steph Curry, Kevin Durant, Russell Westbrook, and Paul George look especially good on our iPhone’s screen. 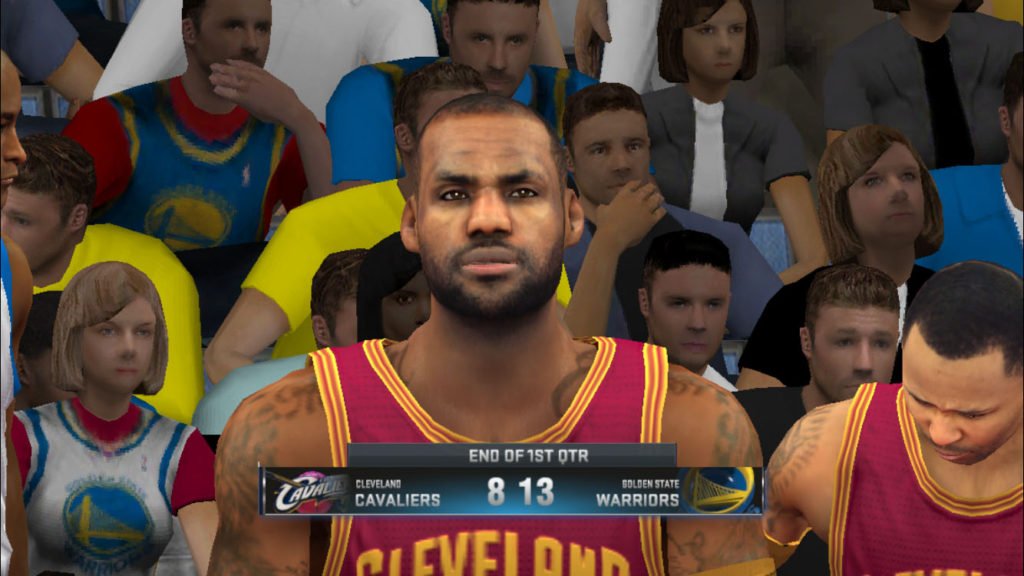 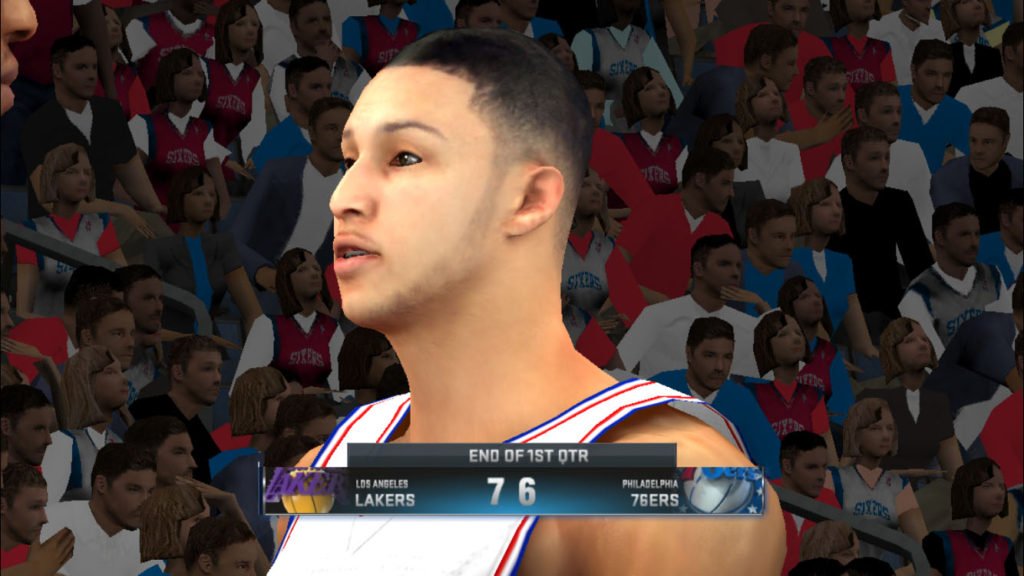 The rookies — um, not so much. Sure, Ben Simmons and Brandon Ingram, the top two picks of this year’s draft, resemble their real-life counterparts. But most other draftees, including potential Rookie of the Year candidate Kris Dunn, have been left out of the creative process, leaving them with generic faces. Yet still, some guys like Jordan Clarkson of the Lakers have reddish faces that look as though they’ve been out in the sun way too long.

Here’s hoping a future update will someday sort out this issue and include new player models. But as it stands, NBA 2K17 is a visually stunning mobile game, and it’s easily right up there with the eye-candy elite of the App Store and Play Store.

The NBA 2K franchise is known for its true-to-life gameplay and signature animations, and NBA 2K17 sticks as closely as possible to the same game plan that made its console and PC outing a success.

A whole boatload of new animations — most of them are triggered by contact — have been added to make players react more realistically to just about every basketball situation you can think of. The on-court action is slick and fluid and reflects the pace of an actual NBA game. As far as interpreting a sport goes, no other mobile game comes even close to matching the realism on offer here.

The intuitive dribbling system doesn’t feel as tight and responsive as that of the PC version, but you do feel that you have more control of the ball this time around. Speaking of controls, you have the option to use a third-party controller or switch to on-screen controls, which can get a bit tiring on the wrist and thumbs. Not to mention those thumbs can get in the way of the screen while playing.

There’s a fresh and more streamlined virtual-control scheme to wrap your head around this year, though if you prefer last year’s dual-analog approach, or even NBA 2K15’s controls, you can switch things up with a couple of taps. Defending is easier when using the new scheme, but it will leave you with less control over your team. After four quick games, we reverted to NBA 2K16’s controls and never second-guessed it. 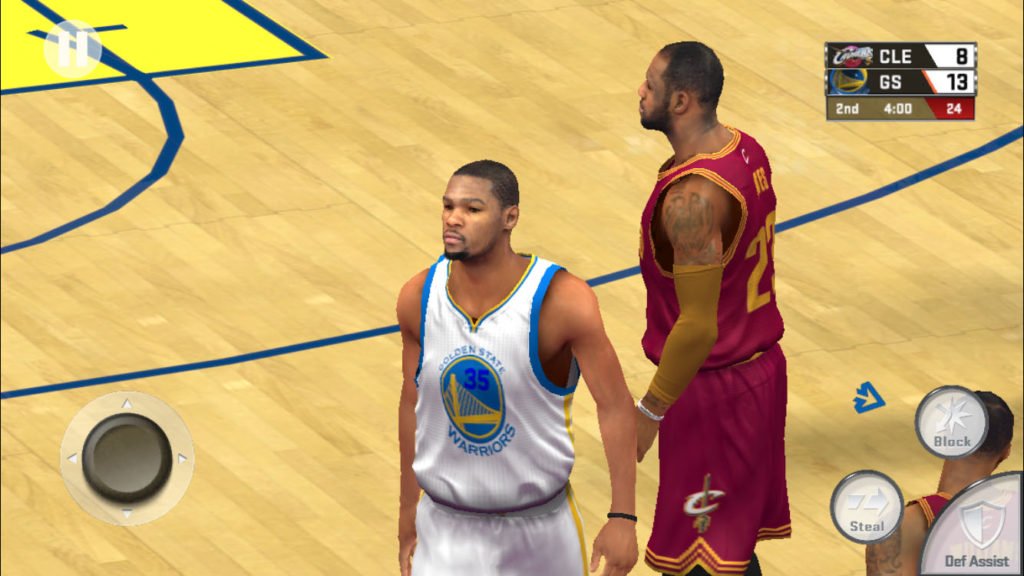 Defending is easier when using the new, more streamlined virtual-control scheme, but it will leave you with less control over your team.

NBA 2K16 required a ton of storage space to install and, provided they met the steep hardware requirements, brought most devices to their knees. NBA 2K17 is still as demanding as ever; it needs around 3GB of storage, and from the heat emanating from our iPhone 6s, we can tell that it still requires maximum effort to run with minimal fuss. But it did run smoothly, with all the settings maxed out. And the frame rate never fell behind the fast-paced action, something we couldn’t say about the previous release.

We also noticed that some Android devices that couldn’t install NBA 2K16 are compatible with this year’s version. Case in point: the OPPO F1s. Of course, that’s not to say it will run fine on just about any phone or tablet released this last half-decade. The only way to know for sure is to buy the game, play a few matches, then ask for a refund if things don’t go as you had envisioned them.

We noticed that some Android devices that couldn’t install NBA 2K16 are compatible with this year’s version. Case in point: the OPPO F1s.

Another observation: This game is an absolute battery hog, even more so than Pokemon Go with all the sensors working. We played one match with four-minute quarters, and it drained our phone’s battery to 74 percent from a full charge — a huge drop, we know. Dialing the settings back a bit and switching to Low Power mode, we were able to cut down the battery drain to about 14 percent.

NBA 2K17 for mobile is a battery hog, even more so than Pokemon Go with all the sensors working. We played one match with four-minute quarters, and it drained our phone’s battery to 74 percent from a full charge.

Frankly, the game’s battery usage is the only reason we haven’t touched the single-player story mode yet. Hopefully, the next update covers this issue.

NBA 2K17 for Android and iOS is an engrossing experience that captures the essence of NBA basketball. Our complaints aside, it is the best game of digital sports you can have on your phone or tablet, period. Perhaps more importantly — us NBA 2K fans and students of the game finally have a mobile game worthy of the franchise.

Our complaints aside, NBA 2K17 is the best game of digital sports you can have on your phone or tablet, period.