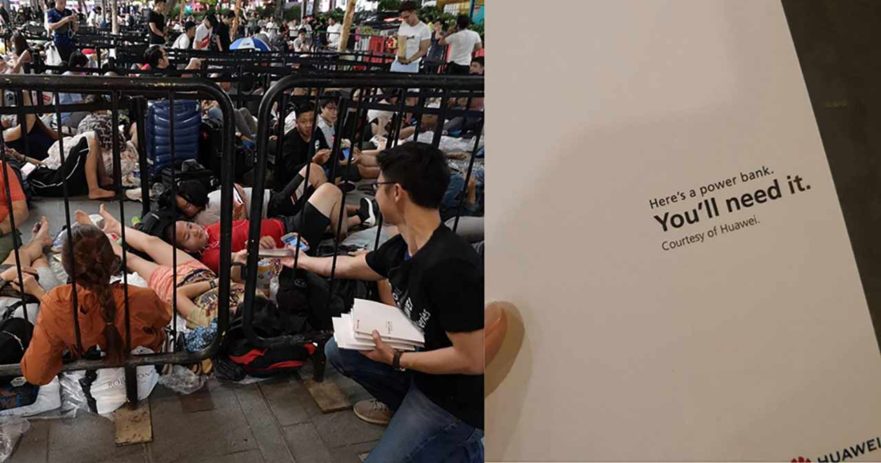 As you may know, Apple launched the iPhone XS and iPhone XS Max recently, with a release date slated for today, September 21, around the world (the Apple iPhone XR will arrive at a later date).

And as with previous years, rival companies, such as Samsung and Xiaomi, have gone to great lengths to mock the new iPhone (and to a certain extent, its customers) on release day. But none so far has trolled Apple the way Huawei just did in several locations worldwide — including Singapore, London, and the Netherlands.

SEE ALSO: Huawei still ahead of Apple in Q2 2018 in another report

In Singapore, for example, a group of people handed out free 10,000mAh Huawei power banks to hundreds of iPhone hopefuls queued outside Apple Stores. There was even a message outside the packaging of the portable charger that read: “Here’s a power bank. You’ll need it. Courtesy of Huawei.”

That’s next-level trolling right there, mocking the iPhone’s supposed one-and-done battery life. And mind you, the Chinese company didn’t give away cheap chargers to Apple customers; it handed out chargers worth around P3,170 or $59 per unit.

Master of trolling. 🙂 Huawei handed out free 10,000mAh power banks to iPhone XS and iPhone XS Max customers waiting for the Apple Store on Orchard Road in Singapore to open. It’s a pity we weren’t there this year. We were there for the release of the iPhone X last year. See Getting an Apple iPhone X on Day 1 isn’t for the faint-hearted

‘JU%CE that lasts.’ In London, Huawei gave ‘Apple-free brain-boosting drinks’ to iPhone customers, mocking the battery life of iDevices in the process

‘If the wait is longer than your battery life, charge it here.’ In the Netherlands, Huawei had this power-bank sofa

This isn’t the first time Huawei has taken shots at the Apple iPhone XS, iPhone XS Max, and iPhone XR. Merely hours after its rival’s anticipated product announcement, Huawei posted a video taunting its chief competitor for “keeping things the same” and allowing Huawei to be the “real hero for the year,” while also reminding the world to watch out for its October 16 announcement in London.

Thank you for keeping things the same. See you in London. 16.10.18 #HigherIntelligence #HUAWEIMate20 pic.twitter.com/ZhZHj9Xg3s

Unlike other smartphones, we push boundaries for the great unexpected, not the predictable. #HuaweiP20 pic.twitter.com/LoXXKAaFv5

Can’t resist embedding one more. We swear there are a lot of these. Just follow Huawei’s social-media accounts

As earlier reported, company will reveal its flagship Mate 20 series next month, with the Huawei Mate 20 and Mate 20 Pro reportedly bringing out the heavy guns to fight Apple at the top. Besides sporting the smarter and more powerful and efficient HiSilicon Kirin 980, the next-gen Mate phones may allow shooting footage underwater using a dedicated setting and video recording with an adjustable bokeh effect.

The Mate 20 Pro, in particular, has also been rumored to include a curved OLED display, a triple-camera system, and a super-fast-charging 4,000mAh battery that can draw 40 watts.