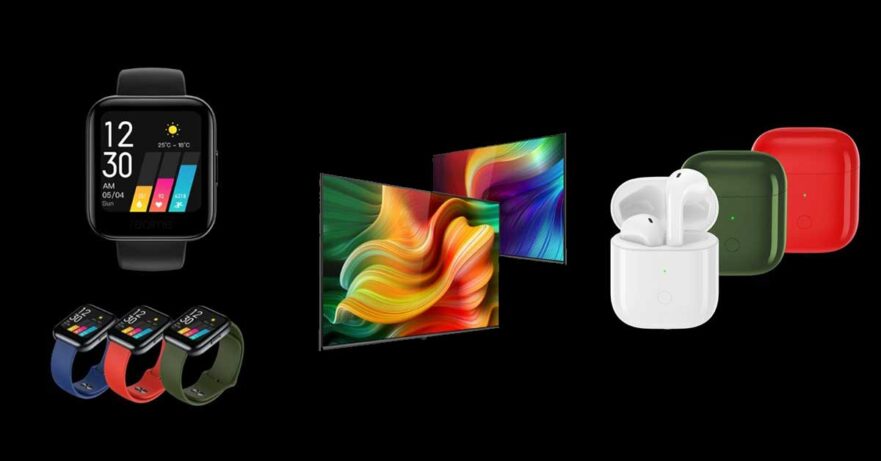 In addition to officially launching the Realme X50 Pro Player Edition, Realme has announced a bunch of other hardware, too, including two new product categories. This is part of its effort to create a 360-degree ecosystem of tech-lifestyle devices.

For wearables, there’s the new Realme Watch, the brand’s first smartwatch, which has been long rumored and speculated by fans and people in the industry. There’s also the first Realme TV ever, the Realme Smart TV, which comes in 32- and 43-inch sizes and sports a quad-core MediaTek processor under the hood, the Realme Buds Air Neo true wireless earphones, and the China-exclusive Realme Buds Q.

Livestream of the online launch. Program starts at the 13:30 mark of the video

A lot to dig in to, yes? Let’s start with the Realme Watch.

The company’s first foray into the smartwatch market features an Apple Watch-like square design with a 1.4-inch, 320 x 320 LCD touchscreen that has a coating of Corning Gorilla Glass 3 on top for added protection and curved sides for easier operation. The rubber watch band also looks like it belongs to Apple’s lineup and is available in several color options, including blue, green, and red.

The Realme Watch runs a custom software based on Android, so it can pretty much do what many other smartwatches do, which is to show notifications, hang up phone calls, control the camera and music playback, monitor your heart rate and blood oxygen level, and many more. The watch adds IP68 dust and water resistance as well, while the 160mAh battery is claimed to last up to nine days without heart rate monitoring.

The Realme Watch is priced at ₹3,999 (around P2,675 or $53) in India and will go on sale beginning June 5 on Realme’s official Indian website and Flipkart. Customers can buy the watch offline at a later date.

Watch the official unboxing of your 24/7 Health Assistant, #realmeWatch & take a look at its cool design & trendy features.

It runs Android 9.0 Pie out of the box and has access to the Google Play Store for Android TV, so you can download some of your favorite smartphone apps, such as Netflix, Amazon Prime Video, and YouTube. Other specifications include Bluetooth 5.0; support for Dolby Audio and HDR10 content; and a quad-speaker system with 24 watts of rated sound output.

Finally, the Realme Buds Air Neo are almost identical to the Realme Buds Air, which launched in the Philippines for P3,990 ($79). The latest buds, though, have larger drivers and are available in new red and green colors, on top of the white color variant.

And more importantly, they’re cheaper. The drawback is that, unlike the regular Buds Air, they don’t have wireless charging on their case and Environment Noise Cancellation or ENC technology.

The Realme Buds Q, on the other hand, look more sophisticated in comparison to other earphones in Realme’s portfolio. They were designed by Hermès co-designer José Lévy and come with IPX4 certification, allowing for some splash resistance.

They ship with 10mm drivers, and their case supports fast wired charging up to 30 watts; unfortunately, wireless charging isn’t an option. According to Realme, the Buds Q have a combined battery life of 20 hours.