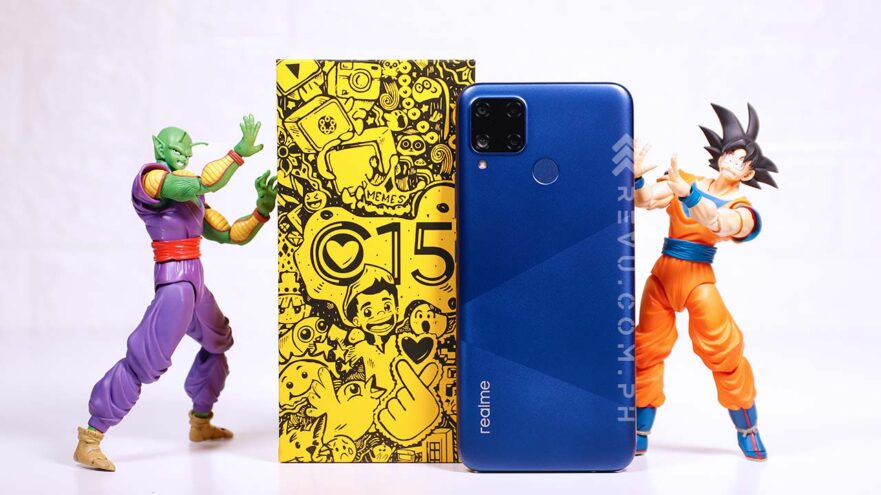 The Realme C15 is now official in the Philippines, adding to Realme‘s arsenal of ultra-affordable smartphones that deliver excellent value for money and strong battery life. Notably, the C15 is perhaps the most compelling C series phone yet, with its massive 6,000mAh battery that supports 18-watt fast charging and four rear cameras.

And yes, that 6,000mAh cell is the largest we’ve seen in the segment and outclasses the Redmi 9 series’ 5,020mAh spec.

In the Philippines, the Realme C15 is retailing at these prices:

The phone is now available on Lazada, while offline selling for the country is scheduled for August 21, the following day. There’s also a limited-edition PH Squad Edition Box for the 3GB/64GB variant of the Realme C15 that’s exclusive to the online-retail platform. You can buy it today as well as on August 28 at Realme’s Super Brand Day sale event.

In addition to its extra-large — and extra-heavy — battery backup, the C15 boasts a MediaTek Helio G35 chipset, which is the same SoC found inside the Realme C11 and Xiaomi’s Redmi 9C. The Helio G35, like its slightly downgraded sibling, the Helio G25, has a 12nm design with eight Cortex-A53 cores and an IMG PowerVR GE8320 GPU.

It has an overall benchmark score of around 100,000 in Antutu, which is a respectable number given its impressive combination of specs and bargain-basement pricing. It also delivers a stable 30 fps when playing Mobile Legends at Medium graphics.

As for the battery, Realme says the 6,000mAh cell can last 57 days on standby and is claimed to provide up to 28 hours of YouTube playback and up to 9 hours of Mobile Legends gameplay. Those are indeed impressive results.

We’ll publish our review of the Realme C15 today, so do watch for that to help you decide whether or not it’s worth the money.