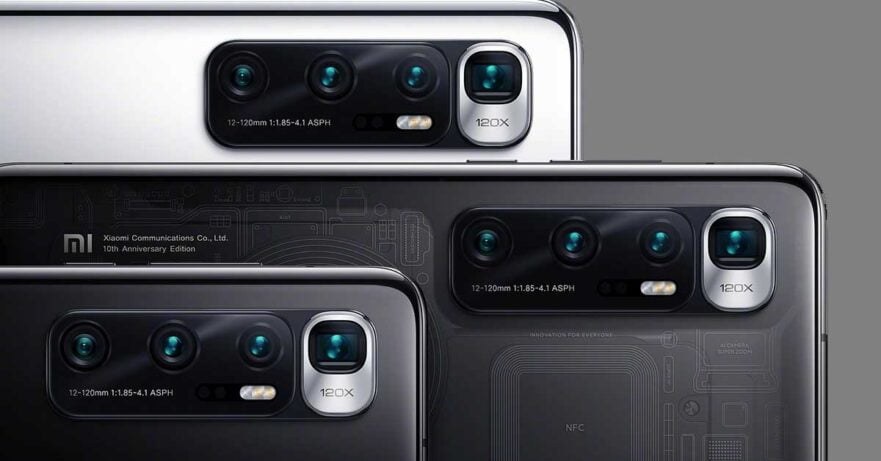 Xiaomi has announced a pair of new premium flagship smartphones to celebrate its 10th anniversary.

For those unaware, Xiaomi initially started out as a software company, and Android-based MIUI was its first commercial release. Though much has changed from that time, it says it remains committed to offering the best products at the most affordable prices.

Today, the company has launched the Xiaomi Mi 10 Ultra and Redmi K30 Ultra at a virtual event streamed from China.

The Mi 10 Ultra, like other Mi 10 models, will be a global release, so we’ll focus on it for the rest of this post. The Ultra is essentially an upgraded version of the Mi 10 Pro. It comes with a similar 6.67-inch curved OLED screen and boasts a Qualcomm Snapdragon 865 under the hood, coupled with up to 16GB of LPDDR5 RAM and 512GB UFS 3.1 storage.

Pricing of the Xiaomi Mi 10 Ultra is as follows:

The phone is already available for preorder in its native China and shipping starts on the week of August 16. No word yet on whether or not it will be released in the Philippines.

The most notable upgrade here can be found in the camera department. The Xiaomi Mi 10 Ultra has four cameras at the back that support 12mm to 120mm focal length and delivers up to 120x digital zoom on a 48-megapixel periscope telephoto camera. And yes, it offers the highest possible zoom on a smartphone camera, outclassing the 100x zoom on the Samsung Galaxy S20 Ultra and Huawei P40 Pro Plus.

The main camera packs a custom-built 48-megapixel sensor that is much larger than what the Apple iPhone 11 Pro Max offers. The ultra-wide is 20 megapixels. And there’s a secondary 12-megapixel telephoto camera with 2x optical zoom lens for portraits, too.

You also get laser auto-focus as well as a flicker sensor on the rear. The main and ultra-zoom cameras are capable of shooting up to 8K video. More impressively, the Xiaomi Mi 10 Ultra has been given an overall rating of 130 by DxOMark, making it the highest-rated smartphone camera on the camera-ratings website.

The Xiaomi Mi 10 Ultra has outscored the Huawei P40 Pro

Moving to the front, there’s a 20-megapixel selfie camera that sits in a small punch hole on the upper-left corner. The smartphone upgrades to a panel with a 120Hz refresh rate, HDR10+, as well as an improved in-display fingerprint reader. The resolution remains stuck at 1080p, though.

The Mi 10 Ultra houses a dual-cell battery with a 4,500mAh combined capacity that supports Xiaomi’s 120-watt Mi Turbo Charge standard. This positions this model as the fastest-charging commercial device on the market right now, capable of charging the Ultra’s battery from zero to full in just 23 minutes. A fast charger is bundled in the box, so you don’t need to buy one separately.

You really should not spend any more time worrying about your everyday charging. #Mi10Ultra #From10ToInfinity pic.twitter.com/USkEzIAb16

The Xiaomi Mi 10 Ultra also ships with an unprecedented 50-watt fast wireless charging that can fully fill the battery in 40 minutes. For context, the regular Mi 10 goes up to 30 watts using a wireless standard.

Other key specs of the flagship handset include 5G and Wi-Fi 6 connectivity; stereo speakers; 10-watt wireless reverse charging; and MIUI 12 built around Android 10.