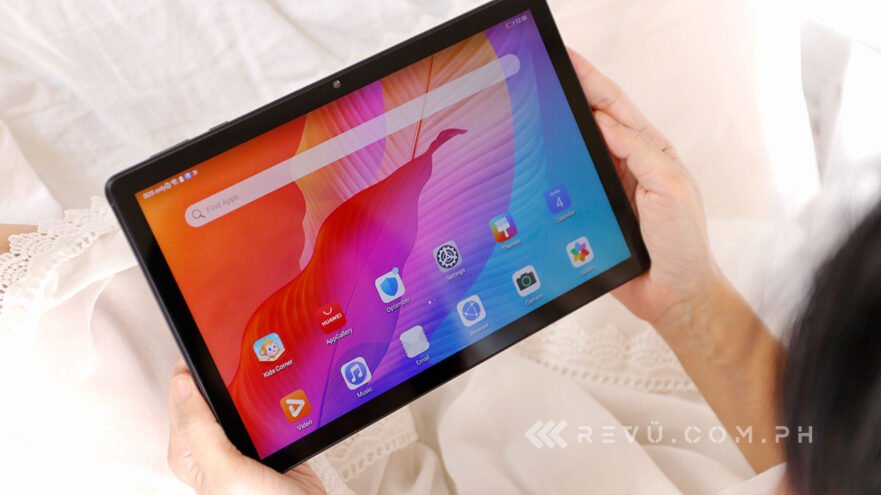 Huawei Philippines has recently added a pair of new tablets to its local Android lineup, with the Huawei MatePad T 10 and MatePad T 10s now listed on its own online store.

(Update, October 17: Highly recommended! We tell you why in this article: Why the MatePad T 10s may be perfect for your child and family.)

The first 200 early buyers of the Huawei MatePad T 10 will receive a free Huawei Band 4 worth P1,890 ($39). Preorder freebies for the Huawei MatePad T 10s include a pair of Huawei FreeLace earphones worth P3,490 ($72) and a flip cover. The bundle, which is valued at P4,480 ($92), is only for the first 100 buyers of the higher-end variant, so you might want to act fast if you really want to get your hands on it and score those items.

For more about the Huawei MatePad T 10s, including specs and live images of our review unit, scroll down this article.

The Huawei MatePad T 10s brings a 10.1-inch full-HD screen encased in one of the most compact form factors you’ll find for a full-size tablet. It has reasonably slim bezels on all sides, and as you’d expect, there is no notch or punch hole on the front for a selfie camera.

Picture quality is decent for an affordable multimedia device, and the black levels are passable in their depth, which is good news for people who are looking to watch movies on the Huawei MatePad T 10s.

The case seems to be made of a mix of plastic and metal to keep the cost down, and unlike the regular version, the MatePad T 10s has a SIM-card slot for 3G or 4G connectivity. You can use it for calls and SMS messages; unfortunately, the tablet doesn’t support Huawei’s MeeTime feature, which lets you make high-quality video calls using Wi-Fi or mobile data.

Impressively, the MatePad T 10s boasts dual stereo speakers on both sides to deliver a more even sound field. The speaker setup is tuned by high-end audio manufacturer Harman Kardon, among other notable features.

We haven’t really put the tablet through its paces yet, but assuming a good-sounding speaker setup is present here, it would be a huge plus for a tablet designed primarily for media consumption. Also on one of the sides is a USB-C port that supports 10-watt charging.

On the back, the MatePad T 10s has a single 5-megapixel camera with f/2.2 aperture lens. It’s obviously not the sharpest we’ve seen in the category. While it is nice to see a clear camera on a tablet, it is not a necessity. The front-facing camera is 2 megapixels, which meets the bare minimum specifications for decent video calls.

Inside the Huawei MatePad T 10s is an octa-core HiSilicon Kirin 710A chipset mated to 3GB RAM and 64GB of storage. While not the latest on the market, the Kirin 710A is capable enough to run two apps side by side using Huawei’s App Multiplier feature. As expected, the MatePad T 10s runs Android 10-based EMUI 10.1 out of the box.

SEE ALSO: Deal alert: Huawei devices up to 60% off for limited time and How to easily install, update apps on the Huawei P40 Pro Plus using the new Petal Search widget

Meanwhile, the built-in battery is rated at 5,100mAh. It should be large enough to take you well into a second day unless you’re a heavy user of your tablet. In short, battery life shouldn’t be a concern. There are some power-saving options in the Settings, which might come in handy to help you save some battery.

We’ll be back soon with a follow-up article on the Huawei MatePad T 10s. Is it worth buying? If yes, what are its standout features? Do watch for that.