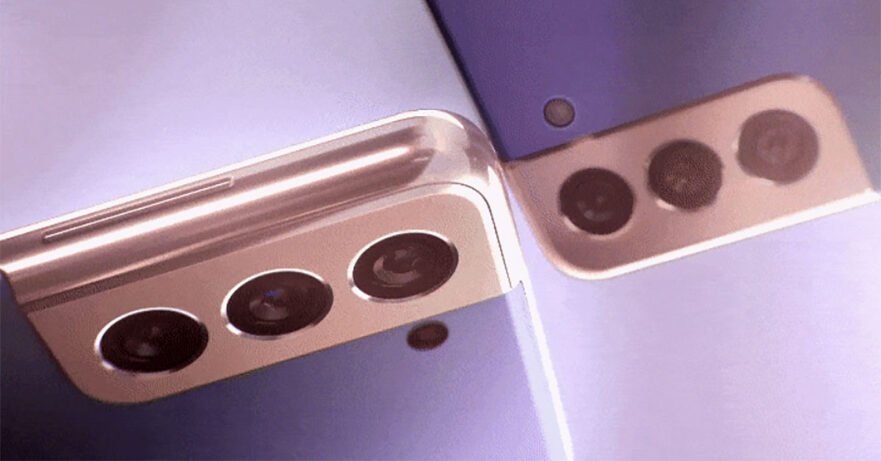 We already saw a lot of leaked renders of Samsung‘s next Galaxy S series phones… but they’re all unofficial. Today, we could be looking at the real deals.

Above, we have the Samsung Galaxy S21 5G in Phantom Violet, which gives the upcoming flagship a two-tone finish. It is also expected to come in Phantom Pink, Phantom Gray, and Phantom White colors.

The smartphone can clearly be seen with three rear cameras with a flash to the right of the camera module.

According to reports, the Galaxy S21 5G will be equipped with a 12-megapixel main sensor, a 12-megapixel ultra-wide option, and a 64-megapixel shooter with a telephoto lens.

We also get a good view of the upper part of the screen, which is flat and has a centered punch hole for a single front-facing shooter.

The Samsung Galaxy S21 Plus 5G, seen above, looks exactly like the non-Plus version. Even what for us is an attractive color of the featured unit is similar. The differences lie in the screen and battery departments, it seems. The Plus supposedly measures 6.7 inches, and its battery is rated at 4,800mAh.

The Samsung Galaxy S21 Ultra 5G is where you get something different design-wise. The video above seemingly confirms previous reports that the most premium of the S21 series units has four cameras. The primary shooter is said to have 108 megapixels; the ultra-wide lens, 12 megapixels; and the 10x super-telephoto and 3x telephoto cams, 10 megapixels each.

One thing that sticks out is the screen, which is now curved instead of the flat, as the panels on the S21 and S21 Plus. It’s expected to be 6.8 inches with a 120Hz adaptive or dynamic refresh rate, too.

All three are reportedly powered by either a Qualcomm Snapdragon 888 or Exynos 2100 chip, depending on the market.

Android Police‘s source has claimed that the Samsung Galaxy S21 lineup will be unveiled January 14 worldwide, earlier than the past S series phones’ launch dates.

It could be true, considering that the devices are apparently already up for blind preorder in India. Those who are interested in buying an S21 may reserve a unit at the Samsung Opera House in Bangalore, which happens to be the Korean technology giant’s biggest store worldwide.

A ₹2,000 (around P1,305 in Philippine pesos and $27 in U.S. dollars) fee is required for pre-booking and, in turn, getting exclusive launch freebies or offers.

We wonder when Samsung Philippines will start taking blind preorders, too. Based on previous announcements, presale takes place around two weeks before the global launch, so probably in the last week of December or first week of January 2021? Let’s see.