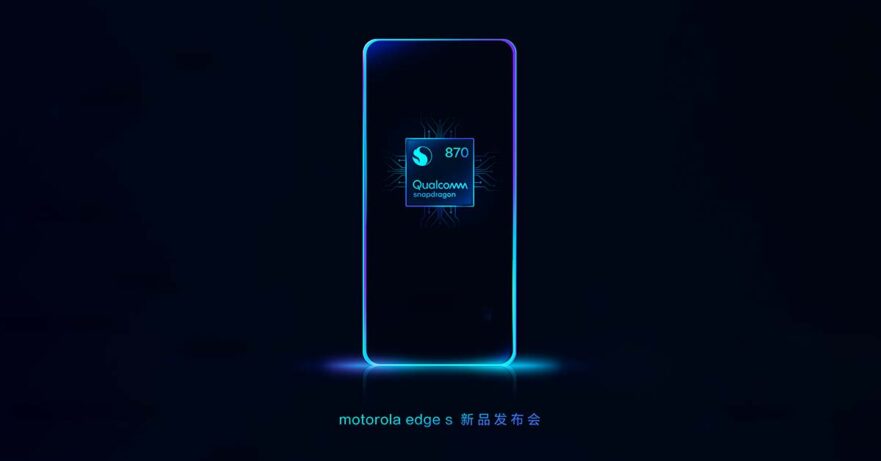 Lenovo-owned Motorola will unveil the Motorola Edge S in China on January 26, according to the company’s official teaser image posted on Weibo. The teaser has also confirmed the phone’s back design. Though a global release has yet to be announced, the Motorola Edge successor should pick up a lot of interest outside of the Chinese market, as it will be the first smartphone to debut Qualcomm’s new Snapdragon 870 5G chipset.

Additionally, the Edge S has been confirmed to have Turbo LPDDR5, as well as Turbo UFS 3.1 storage. Motorola says Turbo LPDDR5 will provide a significant boost to virtual memory, improving performance by up to 72%, while the faster storage is said to increase write speeds by as much as 700MB/s.

Recently, Lenovo China Mobile general manager Chen Jin shared the Motorola Edge S 5G phone’s benchmark score of 679,860 points on the Antutu platform. That’s a pretty impressive score, considering it’s based on hardware that’s already a generation old (two, if you consider the Snapdragon 865 Plus and Snapdragon 865 to be different from one another).

Besides launching with a Snapdragon 870 SoC under the hood, the Motorola Edge S is tipped to offer a 6.7-inch FHD+ screen with a 105Hz refresh rate. It is also expected to sport a 64-megapixel main camera in quad-lens setup, as well as a 5,000mAh battery. Alleged live photos have showcased the device’s front panel, matching earlier rumors of a flat display with a dual punch-hole design.