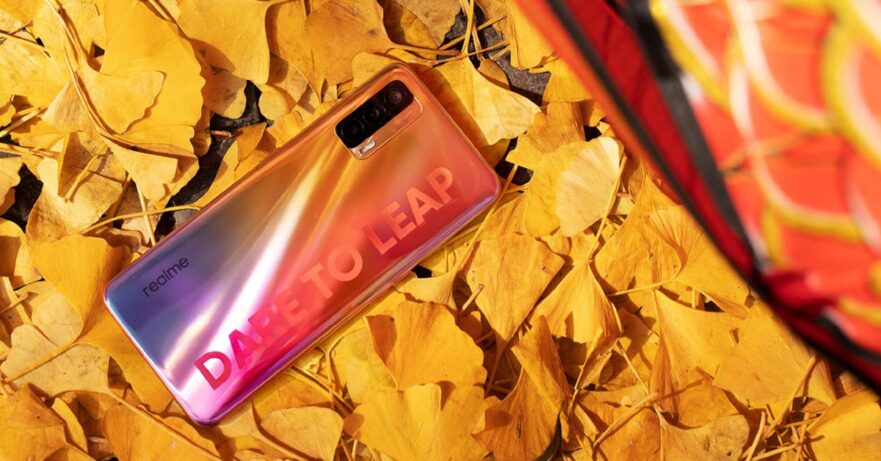 Realme has started to make noise again, signaling that it’s ready for battle after a brief rest. Today, January 7, the world’s fastest-growing smartphone brand has launched the Realme V15 5G in China.

The Realme V15 5G is available in blue and silver colors, but if you’re a bit daring and ready for something colorful, there’s the gradient variant that shows a mix of yellow, red, and blue shades plus the brand’s huge “Dare to Leap” tagline on the back.

Inside is a 7nm-based MediaTek Dimensity 800U, the same chip that devices like the upcoming Redmi Note 9T 5G uses. There’s a 4,310mAh battery that supports 50 watts of fast charging, allowing the unit to go from 0% to 50% in just 18 minutes.

Camera-wise, the Realme V15 5G has three on the rear — a 64-megapixel main sensor paired with 8-megapixel ultra-wide and 2-megapixel macro ones — and a single 16-megapixel selfie camera. And the punch-hole screen is Super AMOLED that measures 6.4 inches and features 600 nits of brightness; a 180Hz touch-sampling rate; and a fingerprint sensor underneath it.

The device ships with a Realme UI version layered with Android 10 out of the box, but the company says the system will be updated to Android 11-based Realme UI 2.0 soon.

Realme hasn’t mentioned anything about a global release, but if and when we hear anything, we’ll be sure to update you.