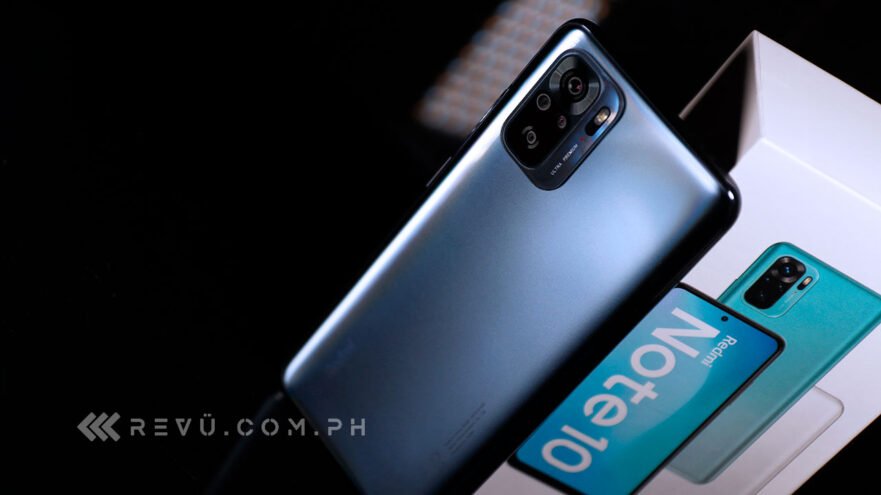 The 4GB/64GB and 6GB/128GB versions of Redmi’s new smartphone will be available at Xiaomi’s official brand store on Lazada. A retail release is also in order for the higher variant, so you might want to check out physical Xiaomi stores near you to see the Redmi Note 10 in person before deciding on your next move. If you’re eyeing the regular Redmi Note 10, the base model of the series, you should check out the rest of this article where we detail the phone’s hardware chops, including its gaming performance and benchmarks.

#RedmiNote10PH is now available at our official store on Lazada with a ₱500 discount on the 4GB+64GB variant!

The Redmi Note 10 is the first smartphone released in the Philippines to use one of Qualcomm’s newest chipsets, the Snapdragon 678, after all. So, naturally, a lot of people are going to be curious about its performance and whether it can take on modern smartphone titles that require more powerful specs to run smoothly. Does the Redmi Note 10 pass the grade? Read on to find out.

What is the Qualcomm Snapdragon 678?

The Snapdragon 678 is a midrange octa-core chipset and the direct successor to the wildly popular Snapdragon 675 that was introduced in 2018 and used in devices like the Vivo V15 Pro and V17 Pro. Qualcomm says the new chip aims to bring better camera performance and connectivity features to mid-tier devices without compromising battery life.

Its Cortex-A76 cores are clocked higher at 2.2GHz compared to the Snapdragon 675’s 2.0GHz A76 cores, though, and Qualcomm notes the GPU has been improved to offer faster speeds with greater efficiency. Additionally, the Hexagon 685 DSP [Digital Signal Processor] of the Snapdragon 678 adds smarter and more robust computing, while the newly added Spectra 250L image processor allows the chipset to take advantage of enhanced camera features when shooting portraits and recording video.

The Snapdragon 678 also includes an X12 LTE modem with advanced carrier aggregation to deliver download speeds up to 600Mbps and upload speeds up to 150Mbps. Dual SIM dual VoLTE or DSDV is onboard as well. This technology allows you to keep HD or Ultra HD calls active on both SIM cards.

The Snapdragon 678 doesn’t support 5G, unlike some other chips on the market like the MediaTek Dimensity 700 in the 5G variant of the Redmi Note 10 and Dimensity 800U inside the Redmi Note 9T 5G (click on this for our review). If you need something future-proof with 5G data, consider the phones we just mentioned because they’re two of the cheapest 5G options currently on the market.

Synthetic benchmarks and real-world use

To really put the Redmi Note 10 through its paces, we downloaded some benchmark apps online and tested our review unit in room conditions at around 25 degrees Celsius.

Based on its Antutu score, the Redmi Note 10 performs on a par with our expectations of a mid-tier product. It won’t smash records, but it’s also no slouch and keeps up with the competition well enough. As expected, our unit scored lower than devices powered by Snapdragon 700 series chipsets like the Snapdragon 720G. It fell behind the Dimensity 800U-based Redmi Note 9T 5G. But to be fair, MediaTek’s affordable 5G SoC ranks among the fastest in its price range.

The Geekbench score of the Redmi Note 10 is average, nothing special. Its octa-core CPU and Adreno 612 GPU only begin to show their age when matched up with SoCs that are positioned higher on the market.

We put the Redmi Note 10 through Wild Life and Sling Shot runs in 3DMark, a popular cross-platform benchmarking tool used to determine a phone’s graphics rendering potential and workload processing capabilities. As usual, running the app produces a score with higher results indicating better performance. In our case, the numbers were passable for the handset’s price point.

The CPU Throttling Test app can be downloaded for free on the Google Play Store. It gives you an idea how your device handles performance throttling over a specific period. At the 5- and 15-minute marks, the Redmi Note 10 showed minimal signs of slowing down. The 30-minute mark is where things start to go downhill, but not by much.

Even after an hour of torture, our unit retained 80% of its max ouput throughout our run, gradually dropping its performance over time without showing jarring stutters. Seeing performance drops over time is inevitable; what’s quite impressive about the Redmi Note 10 is that it managed to avoid massive dips in this synthetic scenario, suggesting it won’t suddenly throttle down during heavy workloads.

We used Xiaomi’s built-in screen recorder to record all our gameplay footage on the Redmi Note 10. The native FPS counter on MIUI 12 was also used to measure frame rates in-game.

For PUBG Mobile, the highest graphics option available on the Redmi Note 10 is HD, which is fine since it doesn’t support HDR playback, anyway. The frame-rate settings go all the way up to High. We got an average of 30 fps using the HD preset. That’s okay if you’re not into competitive gaming. What is more important to note is that the Note 10 can maintain stable frame rates, so random slowdowns and stuttering shouldn’t be an issue.

Mobile Legends is arguably one of the most popular mobile games in the region, and the Philippines is no exception to an active community of Mobile Legends players and fans. Like most midrange devices on the market, the Redmi Note 10 can maintain 45 fps to 50 fps with the graphics set to High. Playing at Ultra detail drops the frame rate to about 40. Mobile Legends currently doesn’t support gameplay higher than 60 fps, so the 60Hz AMOLED screen here is a good fit for the game.

Similar to PUBG Mobile, Genshin Impact is a visually striking game with the gameplay to match. Many reviewers — us included — recognize it as the most demanding Android game ever made.

We were able to average 30 fps using the game’s lowest preset. Switching to Medium produced slightly better graphics at the expense of frame rate. At Medium detail, our fps hovered in the mid-to-high 20s during gameplay. While obviously not ideal, we’re happy with the results we got considering how much the Redmi Note 10 costs, plus the fact that Genshin Impact looks stunning for a mobile title even when the visuals are reduced to their worst-looking.

Powered by the new Qualcomm Snapdragon 678, the Redmi Note 10 has proven to be a decent performer. It delivers a solid experience at low to medium graphics when playing demanding games that require more graphics power, such as PUBG Mobile and Genshin Impact, and CPU throttling isn’t a concern, even after an hour of stressful testing. So from a performance standpoint, the smartphone fares as well as you’d expect given the hardware.

The Redmi Note 10 delivers a solid experience at low to medium graphics when playing demanding games that require more graphics power, such as PUBG Mobile and Genshin Impact. And CPU throttling isn’t a concern

Xiaomi has nailed the pricing of the Note 10 series in the Philippines, with the vanilla model officially going for P8,490 ($175) at local retail. This gives the brand yet another contender in the sub-P10,000 ($207) market that will appeal to its intended audience of budget-minded users who want the most value for money.