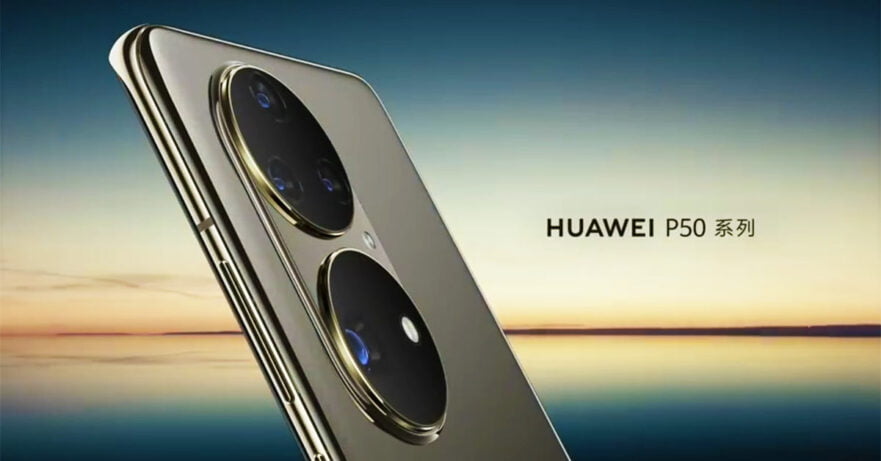 At the recently concluded HarmonyOS 2.0 event, Huawei showed off a couple of new products, including the Qualcomm Snapdragon 870-based 10.8-inch MatePad Pro and MatePad 11, Watch 3 lineup, FreeBuds 4, and MateView professional and MateView GT gaming monitors.

However, there’s another exciting product that was a no-show, but was officially teased. The company showcased the Huawei P50 series in a 45-second promotional video that ended with a huge question mark hanging over its release date. Unfortunately, there is no word as to when in 2021 Huawei’s new flagships will actually drop.

The promo shows what looks like the Huawei P50 Pro with a curved screen and a Leica-branded camera system with quad rear-facing sensors housed in two circular camera islands stacked on top of one another, as opposed to one big camera bump identical to that on the Huawei Mate 40 Pro. The top half of the camera module includes three sensors, while the bottom packs a single sensor and an LED flash.

The Huawei P50 series official launch teaser, as shared by a tipster who seems to suggest that the phones — or one or two of them — could arrive with a yet-to-be-unveiled 4G version of the Qualcomm Snapdragon 888 processor

Another spec worth pointing out is that the rear camera of the Huawei P50 Pro will go from 18mm to 125mm, hinting at the presence of a 5x periscope lens. Previous leaks mention a 1-inch Sony IMX 800 image sensor — the largest sensor on a mobile device to date.

The P50 series is expected to launch with Huawei’s own Kirin chipsets, but there is a strong possibility we might see the smartphones arrive with Qualcomm chips instead, same as the latest MatePad tablets.

The rumor is that a 4G variant of the Qualcomm Snapdragon 888 was scheduled to be introduced in early 2021, but production delays have forced Huawei to push back the global launch of the P50 handsets. Back in November, Qualcomm was granted the license to sell 4G chips to the Chinese technology giant.

Highlights of the Huawei June 2 global event launching HarmonyOS 2.0 and some new products, in case you missed it