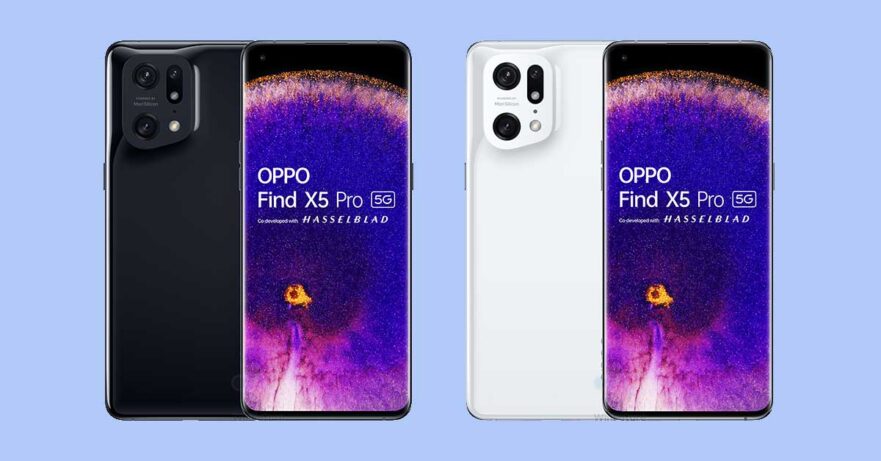 OPPO today announced a three-year partnership with Swedish camera maker Hasselblad, confirming earlier reports that featured leaked images of its forthcoming flagship phone lineup with a Hasselblad branding at the back.

(Update, February 24: The OPPO Find X5 series has been launched!)

That is expected to be the OPPO Find X5 series, which is said to launch in the first quarter of 2022 alongside the OPPO Pad tablet and OPPO Enco X2 TWS earbuds. OPPO says that Hasselblad will “co-develop industry-leading camera technologies” for the flagship Find X line.

The partnership is expected to focus on bringing improvements in color science to the company’s smartphone-camera system, with a specific focus on providing “the most natural skin tone possible” when capturing portraits. That totally makes sense, since phone cameras tend to oversaturate and oversharpen images during processing.

Honestly, hearing about brand working with Hasselblad is hardly surprising, considering that the latter and OnePlus, which exists under the same umbrella company as OPPO, have previously collaborated on last year’s OnePlus 9 Pro. As people in the industry say, it was only a matter of time.

We’ve got an announcement to make 👉 We’re embarking on a three-year partnership with legendary camera manufacturer, @Hasselblad! Stay tuned to see how the next-level Hasselblad mobile imaging experience unfolds on the OPPO flagship Find X series.

It’s only a natural fit given the Find X series’ historic focus on imaging technology. The brand’s previous flagship, the OPPO Find X3 Pro, sports two 50-megapixel Sony IMX766 sensors at the back alongside a 13-megapixel telephoto shooter offering up to 20x digital zoom and a 60x microlens camera that snaps incredible super-macro photos. It even comes with its own ring light.

Besides its collaboration with Hasselblad, OPPO will also incorporate its first in-house NPU into its upcoming Find-branded flagship. The NPU is called MariSilicon X, and it has been designed to address “some photography issues smartphone users face while doubling down on enhancing OPPO features for taking that perfect photo and capturing precious moments in 4K resolution.”

According to the company, its dedicated image-processing chip will introduce up to 4x better HDR outputs and real-time RAW processing on smartphones, while also improving the RGBW sensor performance and images captured in low light. It should help you preserve battery life as well, particularly when shooting 4K video at higher than 30 frames per second.

In related Find X5 news, the standard X5 model is expected to feature a 50-megapixel Sony IMX766 primary sensor, same as its predecessor. The OPPO Find X5 Pro with the model number CPH2305, on the other hand, was previously spotted in a Geekbench listing pairing a Qualcomm Snapdragon 8 Gen 1 5G chipset with 12GB RAM and running Android 12.

The Find X5 Pro has been tipped to feature a non-traditional camera module with a seamless camera bump similar to the Find X3 Pro’s. On the front, you likely have a 6.7-inch LTPO 2.0 AMOLED display with a 2K resolution and a max refresh rate of 120Hz. It’s said to come with an under-display fingerprint sensor, as well as Corning Gorilla Glass Victus for protection. It could be priced at €1,200 (around $69,825) in Germany and should come in two colors — Ceramic Black and Ceramic White.