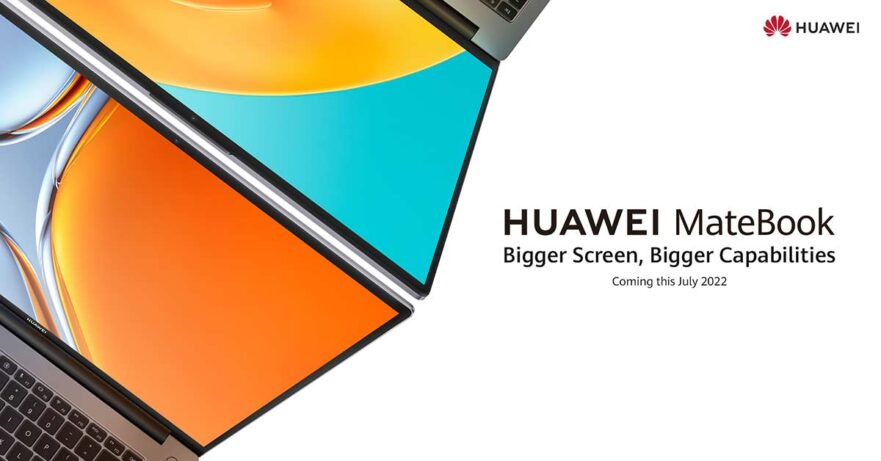 Huawei will unveil at least two new MateBook laptops in the Philippines as part of the company’s APAC Smart Office Launch 2022 on July 27.

(Update, July 25: We were right! And even better news? Our video on the Huawei MateBook D 16 is already up!)

Based on the teaser image shared by Huawei, it’s likely that the new MateBooks in question are the MateBook D 16 and higher-end MateBook 16s.

Both devices are already out overseas and are based on the latest 12th Gen H-series Core processors from Intel. They’re also equipped with a new 1080p AI Camera on the top bezel with native virtual-background and FollowCam features to give you a more natural video-call experience.

On the display front, both laptops feature large 16-inch screens with advanced hardware- and software-based technologies to protect your eyes from harmful light frequencies, hence the “bigger screen, bigger capabilities” tagline. The MateBook D 16 has a 1,920 x 1,200 resolution on a 16:10 aspect ratio, while the MateBook 16s features a sharper 2.5K resolution with a 3:2 ratio, making it more suitable for office apps and web browsing.

Another key difference is that the top-of-the-line MateBook 16s can be configured with up to a 12th Gen Intel Core i9-12900H CPU, while the MateBook D 16 tops out at an Intel Core i7-12700H chip, which is still plenty fast enough for everyday tasks. If you’re not familiar, Intel’s 12th Gen H-series chips are high-end, high-performance mobile CPUs for laptops based on the Alder Lake architecture.

Word has it that other devices and HarmonyOS 3.0 will be announced on the 27th, too, so we suggest that you stay tuned for next week’s event.