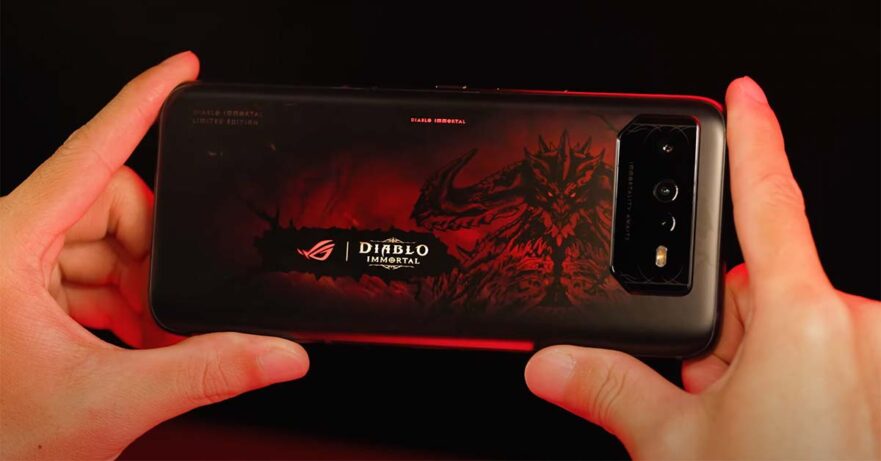 And soon, hardcore gamers and Diablo fans will be able to get their hands on the limited-edition smartphone in the Philippines for P68,995 (around $1,227 converted) when it hits ASUS and ROG stores as well as partner retailers nationwide in mid-December. It’s basically the same as the standard ROG Phone 6 with 16GB RAM and 512GB of onboard storage, with all the changes being applied on the aesthetic front.

You may recall that ASUS also launched the ROG Phone 6 Batman Edition in the Philippines in October with a P62,995 ($1,123) price tag.

The back of the phone sports the Hellfire Red Colorway with a flame-effect design, a semi-matte finish, and RGB lighting in the shape of the game’s title. It’s obviously tailored to fans of Blizzard’s immensely popular IP. Diablo fans will surely appreciate the attention to detail that runs through the chassis and the package it ships in.

Speaking of which, the ASUS ROG Phone 6 Diablo Immortal Edition will arrive in a large custom box to store all the exclusive goodies in. As you can see, it shows some key art for the game, including its big, red baddy. Inside, you’ll find that the leather pouch for the charging brick and cable is also a map scroll of Diablo Immortal’s Sanctuary world.

Meanwhile, the small red box that contains the phone and the Shield Blessing Aero Case, as it is called, resembles the Worldstone Shard, an in-game artifact. You get a custom SIM-eject tool, too, as well as the Fahir’s Light UV torch, which reveals a hidden Easter egg on the inside of the case when used onto its surface. There is no AeroActive Cooler 6 for the ROG Phone 6 series in the box, though.

In terms of the software, you’ll find some Diablo Immortal-themed wallpapers, icons, always-on lockscreens, and animations when you boot the phone. There’s some ringtones and notifications inspired by the game as well.